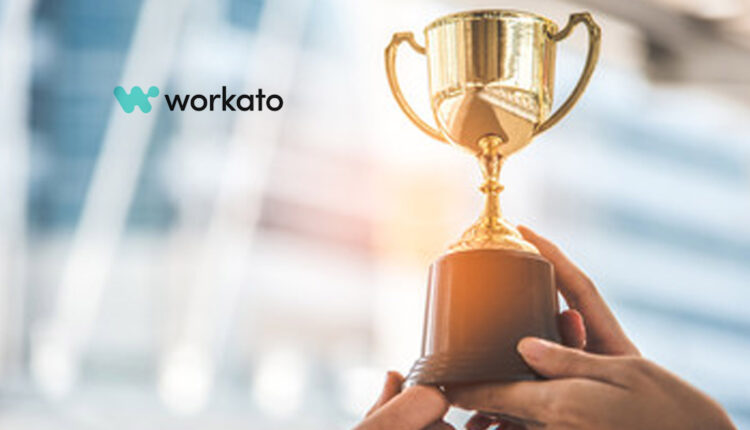 Workato, the leading enterprise automation platform, today announced that it has been honored in Built In’s 2022 Best Places To Work Awards. Specifically, Workato earned a place on the Best Places to Work in Colorado and Seattle, Best Large Companies to Work For in Colorado, New York City, Seattle and San Francisco, and Best Paying Companies in Colorado and Seattle lists. Workato was also recognized as one of the 25 Highest-Rated Private Cloud Computing Companies to Work For in a 2021 list released by Battery Ventures, a global investment firm and cloud investor, with data specifically provided by Glassdoor*. The distinction places Workato at number 15 with an overall company rating of 4.7 out of 5 on Glassdoor, compared to the broader average of 3.7.

Tweet this
“At Workato, we are proud of our reputation among customers as one of the best companies to work with, which I believe is due to highly engaged team members that love working with and supporting each other. Each employee has contributed to creating a strong culture centered around our core values, such as putting the customer first, and being a team player,” said Workato CEO, Vijay Tella. “We are honored to be recognized as a great company to work for in some of the most competitive markets in the nation. We’re also thrilled to be recognized by Battery Ventures as a top place to work as they have been a key investor in our company’s growth over the years.”

Built In determines the winners of Best Places to Work based on an algorithm, using company data about compensation, benefits and companywide programming. To reflect the benefits candidates are searching for more frequently on Built In, the program also weighs criteria like remote and flexible work opportunities, programs for DEI and other people-first cultural offerings.

“It is my honor to extend congratulations to the 2022 Best Places to Work winners,” says Sheridan Orr, Chief Marketing Officer, Built In. “This year saw a record number of entrants — and the past two years fundamentally changed what tech professionals want from work. These honorees have risen to the challenge, evolving to deliver employee experiences that provide the meaning and purpose today’s tech professionals seek.”

This is the fifth year Battery Ventures has issued a version of its highest-rated cloud companies list, along with a related ranking of the 25 Highest-Rated Public Cloud Computing Companies To Work For. The rankings—which this year come as many companies continue to face workplace challenges associated with the COVID-19 pandemic, including remote and hybrid work–highlight the global trend of businesses increasingly turning to the cloud to run critical technology systems and software, instead of using on-premise systems.

“While the pandemic has accelerated the businesses of many cloud companies—whose products often help fuel digital transformation—many cloud CEOs are still grappling with how to build great corporate cultures, hire the best employees and retain them in an incredibly fast-changing and unpredictable business environment,” said Neeraj Agrawal, a Battery Ventures general partner who specializes in cloud investing. “The companies on this list should feel proud of their success building positive cultures and promoting employee satisfaction, which often translates into financial success. They really are modeling best practices for other organizations across the economy.”

Creating a Digital Identity for Every Physical Object:…