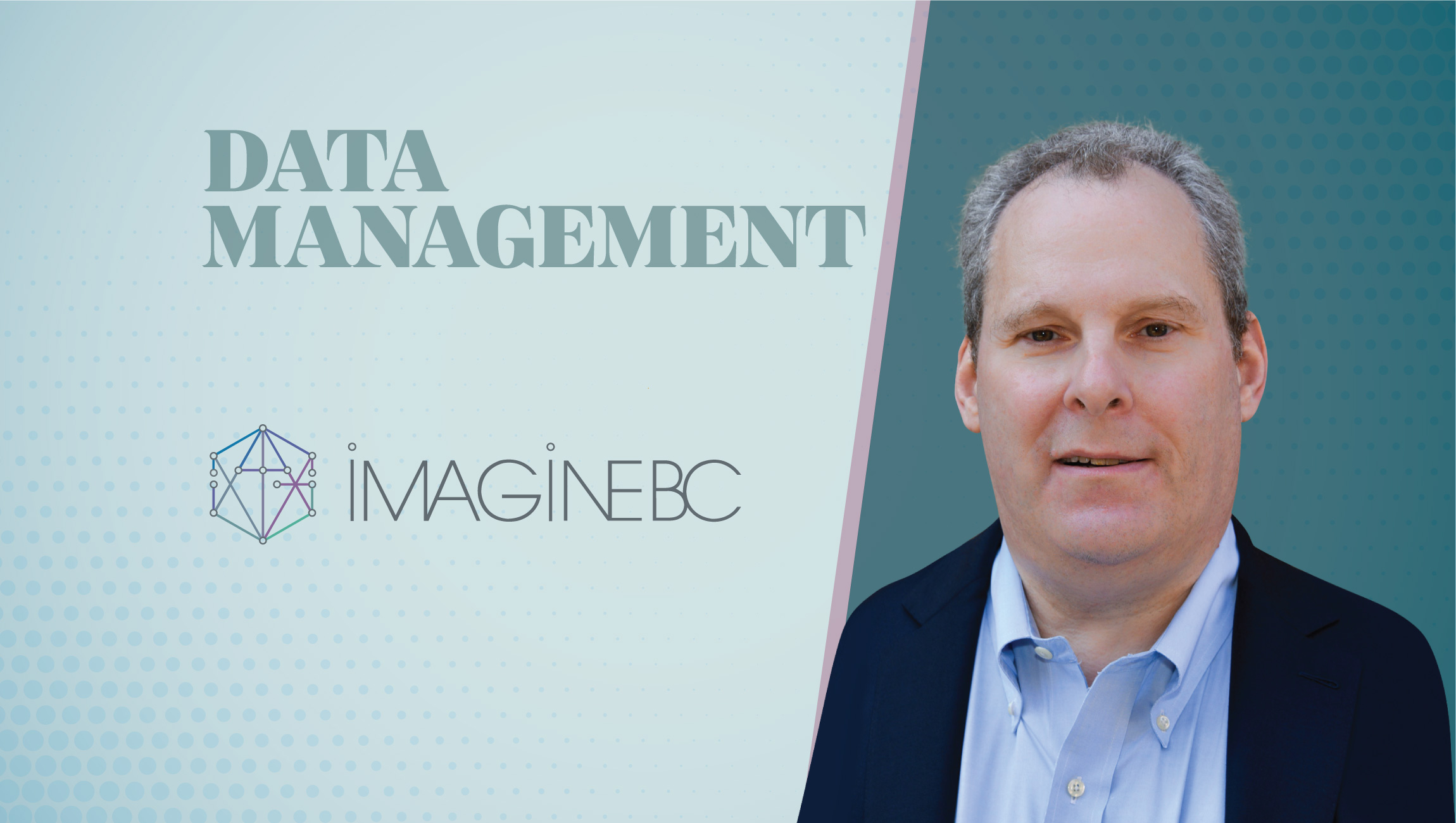 How would you best describe your journey through technology?

A long and winding road. As a Graduate from The George Washington University with a B.A. in History you would not think that I would end up following the path of a technology entrepreneur. After a very brief stint working for the Urban Institute, I was lucky enough to land a job working as a technology consultant inside the Office of Government Services at Price Waterhouse. Yes, Price Waterhouse not PWC. When I started with Price Waterhouse, there were still 8 large Accounting firms and they were a long way from shortening their names to be just mnemonics.

The 8 years I spent at Price Waterhouse were the most enjoyable of my professional life, until I started ImagineBC. It was 1983, computers were just becoming democratized by becoming portable. Well, maybe not portable but definitely luggable for anyone old enough to remember the first Compaq portable PCs, which were the size of a suitcase sporting a 6-inch monitor. The work there was fascinating and the teams I worked with forced me to constantly lift my game.

After leaving Price Waterhouse, I became a reluctant entrepreneur. Having built a state-of-the-art system to process large volume payroll, human resources and benefits off the mainframe, I spent 20+ plus years playing David to ADP’s Goliath. Like many entrepreneurs, I have had my share of success and failure.

With the introduction of Blockchain technology and my awakening to the potentially world-changing opportunity of this technology, I knew I had to be involved with it in some capacity. So, I created ImagineBC as a subsidiary of the HCM company I started in 2003 and for the past 2 years have dedicated my time and energy to creating an ecosystem built on Blockchain that will allow every individual to control their personal data and most importantly be fairly compensated by third parties for the use of that data.

Tell us about your role and the team/technology you handle at ImagineBC?

I am the Founder and CEO of ImagineBC, and my role is to keep an amazing team of professionals focused on executing the mission of our company. I like to say, I’m like the guy wearing the red coat and black hat at the circus. It’s my job to keep the incredible array of talent we have assembled moving smoothly. I also act as the moral compass of the company. Once you let accountants and lawyers start having input into your dream it is easy to become distracted. ImagineBC’s mission is to help its members monetize their personal information. It is my job to constantly remind all members of our team that although ImagineBC is a for profit business, we are only entitled to earn money after we have done our job which is to help our members make money.

How was the idea for ImagineBC conceived?

I guess you can say ImagineBC was ripped from the headlines. At about the same time that I was becoming fully aware of the potential of Blockchain technology, I had arrived at a point in my life where it was no longer acceptable to just complain to my friends, family and associates about what was happening in the world. The birth of my first grandchild also made me start to think seriously about the type of world he will be living in 20 years from now and what I saw frightened me. ImagineBC is using technology to remind individuals that it is still We the People, who have the power to create change.

We can no longer trust the third parties that have driven our economy to solve our problems for us. The concept of too Big to Fail is unacceptable. The tech giants treat us as the raw materials of their factories and Government is stalled in gridlock reminiscent of a busy intersection in New York City at rush hour. ImagineBC offers a revolutionary old idea. By using Blockchain technology we are creating a community where members, despite remaining anonymous to one another, can conduct commerce directly with one another.

How many players are there in this technology space and, by comparison, what makes ImagineBC distinctive?

There are a number of other interesting startups that are working on solutions that appear to be similar to what ImagineBC is doing but these companies are typically focused on only part of the complete ecosystem ImagineBC offers its users. ImagineBC is also the only company in this space the can answer “Yes” to each of the following questions:

Do you believe the rise of Big Data has reached its peak and thus is on a decline. Are we going to experience a reckoning?

No. There is no turning back from using AI/ML technology to mine large data sets. And there is no end to the amount of data that can be mined. Truthfully, I see no reason to turn back but what absolutely has to change, is who benefits from the use of this data. I firmly believe that as people come to understand that collectively they have the power to change how their data is used, there will be a fundamental shift in the flow of money.

ImagineBC hopes to be a catalyst of this change. If you were a publisher would you rather the money you spend on Marketing and Advertising end up in Mark Zuckerberg’s hands or in the hands of the very people you are trying to reach to buy your product or service? With ImagineBC, 80% of every dollar a publisher injects into our ecosystem goes back to the very consumers they are trying to each. And even better an additional 10% gets distributed to important social causes who have partnered with ImagineBC.

Are people beginning to recognize and understand the financial value of their data? Will a new privacy paradigm emerge?

Thankfully yes. We rarely go more than a few months without hearing about some giant company having been hacked and letting our data become exposed. The only positive to come out of the hacks of companies like Equifax and Capital One is that the new coverage of these events is helping people finally become aware of how vulnerable their data is and how valuable that same data can be. Our government, albeit only at the State level right now, is beginning to address the issue by introducing and passing legislation based on the GDPR model used by the European Union. In the short term though the discussion should not be about privacy. No company or government agency can promise you that you can get your data back. My finger prints were hacked a few years ago from the Office of Personnel Management.

No Senator or Representative can ever promise me that no one else can have access to my finger prints. Instead, the debate needs to be about who should control and benefit from the data that is out there. ImagineBC thinks the answer is and should always be us. It’s our data, we should be the ones making decisions about how it is used. I do believe that as Blockchain technology becomes more widely accepted by government, there will be a time when we can start to talk about true privacy. It would have been nice if my grandson’s birth certificate, rather than becoming some digital record stored in some centralized database, could have instead been recorded on a Blockchain network where only his parents and he had the key to access it.

What types of businesses can benefit from ImagineBC?

Any business wishing to sell their product/services to a consumer can benefit by becoming a member of our community and membership is free. ImagineBC also offers each member business free access to the tools necessary to mine the data within the community. A business wishing to market or advertise a product to a set of members, directly compensates each member who has elected to consume the business’s message. Additionally, any individual who wishes to receive fair compensation for their intellectual property should join our community. Rather than relying on the vagaries of a platform like YouTube to earn compensation, ImagineBC offers intellectual property holders the right to set their own price and keep 70% of the value of their creativity.

Something you do better than others – the secret of your success?

Lack of greed. Since we started ImagineBC, we have been amazed by the volume of money that flows through our economy and ends up in the hands of faceless intermediaries. It is ImagineBC’s goal to help redistribute the vast majority of this money back to the very people whose data and creativity is being used. In 2018, $235 billion dollars was spent on traditional and Digital Advertising. These industries today use our data to surgically target us by using our data. How much of that $235 billion did you, the reader of this article receive? If you understand what I am asking, look us up at imaginebc.net and ask to become a member. Remember it is only We the People now that can effect positive change!

Erik graduated from George Washington University in 1983 with a B.A. in History. Erik has over 30 years of experience in building advanced technology solutions and has been involved in the HR services industry since 1990.

His professional track-record includes starting and then selling PowerPay software for $22 million and becoming President and CEO of Lyceum Business Services.

ImagineBC is a technological solutions company that believes it is a steward of its users data and not the owner. It will promote peer-to-peer commerce within its collection of decentralized mobile applications. The bulk of the revenue generated will accrue to the data owners/creators and the company will only charge a small transaction fee. The company is set to disenfranchise the “middlemen” and allow users to capture the maximum value from their own data.

ImagineBC’s business model might currently be considered revolutionary as we are leaving a big chunk of money on the table for users and not for ourselves. But we truly believe that the current power structure is untenable and the data-stewardship model is the only feasible way to proceed for businesses of tomorrow.

Adware Accounts for 72% of All Mobile Malware

SEMrush Offers Free Access to Tools During the Pandemic