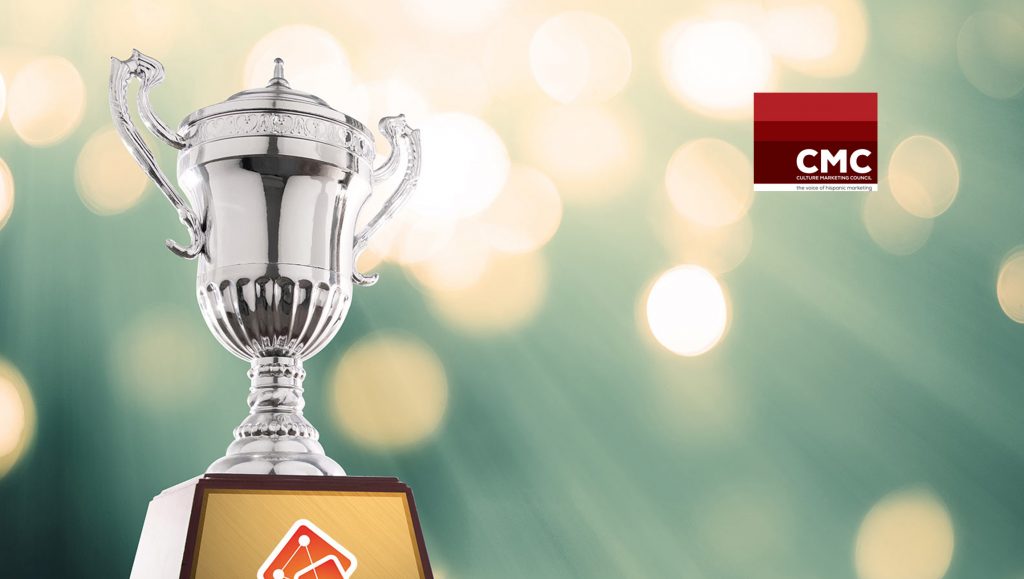 The Culture Marketing Council: The Voice of Hispanic Market (CMC) announced that AARP is the winner of the 2019 CMC Marketer of the Year Award. AARP joins a prestigious short list of elite brands that have received the award, including Ford, McDonald’s, Sprint, State Farm, Toyota, and Walmart. Edna Kane-Williams, SVP of Multicultural Leadership at AARP, will accept the award and discuss the association’s commitment to the Hispanic and Multicultural communities at CMC’s 2019 Annual Summit. The session will take place on Wednesday, June 12, at 9:00 a.m., at the Statler Hotel in Dallas.

“It’s an honor to be recognized by the Culture Marketing Council as marketer of the year,” said Kane-Williams. “At AARP, we make it our mission to understand the needs of the Hispanic community so that we can better serve it with dedicated creative that positively impacts this growing and influential population.”

To be considered for this prestigious award, companies had to demonstrate a top-down commitment to multicultural marketing and significant spending commensurate with the opportunity in marketing efforts targeting Hispanics. AARP has been a committed and consistent advertiser in the Hispanic market since 2011, with double-digit increases since entering the market. Their 360 approach, which encompasses advertising, branded content, public relations and public affairs efforts, earned them significant recognition in 2018, including CMC Culture Account Planning Excellence Awards, Grand Prix and Gold in the Best Cultural Insight category; the North American Effie Award, Multicultural and Lifestyle Segments; New York Festivals International TV & Film Awards, Society and Social Issues; New York Latino Film Festival, Finalist in Documentary Category; Public Relations Society of America’s NY Big Apple Awards and Hispanic Public Relations Association’s ¡Bravo! Awards in the Non-Profit Category for “Media Event of the Year” and “Public Affairs Campaign of the Year” category.

“In a time when some brands that were once at the forefront of Hispanic Marketing have reduced levels of investment or taken short-cuts on Hispanic creative, AARP has reinforced its efforts to become a leading example of excellence in Hispanic marketing, communications and outreach,” said CMC Chair Isaac Mizrahi, co-president/COO of Alma. “A big congratulations to AARP and its culture marketing agency d’Exposito & partners!”

With AARP having the pulse on the US 50-plus segment, the brand paired its robust data with meaningful cultural insights and idioms to create a memorable and motivating brand campaign that drove brand awareness, familiarity and relevance. A multichannel media strategy delivered the campaign utilizing national television, local radio, national magazines and a robust digital plan that included display, audio, online video, paid search and YouTube.

Redefining the Narrative on Aging

Today, people are reinventing themselves and achieving noteworthy accomplishments at any age. To address these dynamics, AARP launched the Cincuentañeros™ movement, which challenges outdated beliefs and sparks new solutions so that people can choose how to live as they age. The movement leverages the power of social media to shape mainstream conversation, utilizing celebrities and social media influencers that personify the Cincuentañeros concept to lend their voices by sharing their experiences.

To generate awareness and address the issue of family caregiving, AARP produced “Cada paso del camino,” a film documentary that tells the story of five Hispanic caregivers, in late 2017. The film was released on aarp.org/espanol with segments published on AARP’s Hispanic Facebook page, as well as national broadcasts.  The award-winning documentary was screened at film festivals and in local markets across the country, followed by panel discussions that featured subjects in the film.

For the 2018 mid-term elections, AARP launched a dedicated voter engagement outreach campaign, called “Sé la diferencia. Vota” to encourage Hispanics age 50-plus to use their voices and vote. The overarching message strategy was customized for this segment to engage them both culturally and emotionally and mobilize them to vote. Creative assets included television spots, online videos, print ads, direct mail, email blasts and collateral materials. AARP also launched Aliados Adelante a dedicated Facebook page with content and conversation on key issues of importance to Hispanics.

In addition, AARP launched a policy agenda, called Disrupting Racial and Ethnic Disparities, to address the grave disparities that exist among people of color age 50-plus in New York and Michigan. AARP commissioned three policy briefs to launch a 3- to- 5-year initiative to identify solutions and implement the necessary policy changes.  AARP unveiled the policy briefs at key stakeholder events that included the participation of policy experts, community leaders, academics, elected officials and mainstream and ethnic media. The events resulted in the development of an Action Plan to address the identified disparities.

Taking place June 10-12 at the Statler Hotel in Dallas, the CMC Annual Summit is the premier Multicultural Marketing Conference featuring dynamic and interactive sessions with notable newsmakers, C-suite leaders and top trendsetters in the industry. This year, the summit will focus on the theme Culture-Driven Marketing with thought-provoking content to arm a new generation of culture creators with proven strategies to make an impact in today’s complex marketplace.

42536
We store cookies on your computer to improve your experience and provide more personalized services, both on this website and on other sites. For more information about the cookies we use, see our Privacy Policy. We won't track your information when you visit our site. We will have to use at least one cookie to ensure that you won't have to make this choice again.AcceptPrivacy Policy