Since Launching in Early October, Instagram Polls Have Been Intensely Popular for Users — Particularly Among Brands and Influencers

It may have taken the public a while to realize that Instagram polls weren’t anonymous, but it didn’t take long for the new feature to garner much excitement from users. Since launching in early October, Instagram Polls been intensely popular for users — particularly among brands and influencers.

How Influencers Engage Their Followers with Polls 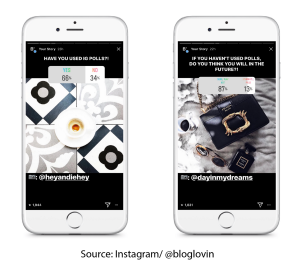 Bloglovin’ polled their 87K+ follower base of influencers and found that 66% of influencers had already tried IG polls within 2 weeks of the feature launching. Out of those who hadn’t, 87% intended to do so in the future. Influencers are clearly using this new feature, but what for exactly? We spoke with dozens of influencers to gauge their reception of polls. One of them, Sam Ushiro of Aww Sam, uses them as a means for content planning, citing polls as a way to vet potential posts by asking followers what types of content they’d like to see more of. The general consensus is that influencers are using polls to connect with followers and decipher what kind of content they will respond to most.

The simplistic and low friction nature of polls are what influencers are latching on to most. Followers may be less likely to drop a comment, but responding to a poll is easier, making it a quick and interactive way to gather feedback. For the effort of a like, polls enable a deeper response from users, and allows influencers to more deeply understand their followers’ opinions on an aggregate basis. In providing an entertaining way for people to give feedback, polls are allowing influencers to form a tighter knit community to engage with their brand.

Read More: How to Turn Your Instagram Page into a Revenue Channel

How Brands Use Polls for Consumer Feedback

Influencers aren’t the only party jumping on the Instagram polling trend. Brands are taking part as well and they’re using them quite similarly. Just as influencers are, brands are using polls to gather valuable feedback from their consumers. 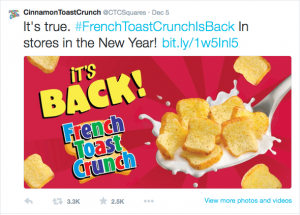 Marketers already proactively search for conversations around their brands across many social media channels. You might remember General Mill’s bringing back their long-retired French Toast Crunch cereal after a lot of chatter on Twitter from nostalgic consumers. 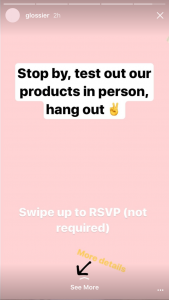 Next-gen direct to consumer brands like Glossier and Away consistently ‘chat’ with their customers on social media to get feedback and ideas for their products. Instagram polls offer a specific platform for easily obtaining and aggregating this kind of valuable customer feedback, allowing brands to ask specific questions, key into consumer desires and open the door to potential sweepstakes opportunities or consumer-generated campaigns.

Brands can not only use Instagram polls to gather valuable feedback from consumers, but also to provide an added level of engagement. By opening up dialogue and inviting its audience to engage, brands also lessen the feeling of ‘self-promotion’ that is usually associated with branded social media pages and accounts.

Brands & Influencers Can Collaborate on Polls to Maximize Reach and Inspiration

Many brands are still testing Influencer Marketing as a core part of their marketing mix, so we did not immediately see brand/influencer collaborations incorporating polls (at the time of putting this article together it had only been a couple weeks since IG Polls’ launch). The strategy, negotiation and preparation periods of influencer campaigns can take time, contributing to why we did not see branded polls immediately, but it’s only a matter of time until they’re used as a key tool in the toolkit in influencer.

Brands can engage influencers to do many of the same things they would do on their own platforms, but to a fuller effect. Because the best influencers strive to create a more personal relationship with their following, an influencer’s opinion — and decision to work with a brand — holds much more weight than a brand pushing the message across their own channels. The first-person perspective — and approval — provided by influencers can be invaluable.

As such, brands can work with influencers to help gauge consumer interest via polls — especially around new product launches or iterations of existing products. Beauty brands could engage influencers to gather feedback around a launch of a new product. Especially with a product like an eyeshadow palette, influencers can be extremely valuable to uncover target audience preferences around details like colors and finishes. Fashion brands could promote a new line by working with influencers to show different looks using a specific piece, like a jacket or accessory, and ask followers to vote on their favorite “ways to wear.”

Not only does it provide exposure for the brand’s products, but offers an opportunity for audience inspiration and knowledge-sharing. A travel brand — whether an airline hotel chain, cruise line or metasearch company — can leverage influencers to source most-desired travel destinations or open dialogue around most necessary amenities when traveling. Airlines are constantly under fire for their offerings, so why not get playful and work with influencers on some sponsored polls around which in-flight perk people couldn’t live without?

Potential collaborations aside, sponsored polls don’t just open avenues for creative content, they also open brands to a different and highly engaged audience. An influencer that is extremely loyal to a brand is more likely to have a following that also has an affinity to that brand as well. As such, followers are more inclined to engage, act and provide honest feedback through a third party they trust.

Like any piece of an influencer campaign, sponsored polls should be implemented with careful strategy and planning. Polls are extremely popular among Instagram users, but if you’re struggling to match poll content to campaign objectives, it’s probably not the best fit. Overall, polls are an exciting new way to engage key audiences, but marketers shouldn’t rush to implement because “everyone else is” —  as with everything else, there should be proper alignment with the brand’s overall marketing strategy and goals.

Kamiu Lee is CEO at ACTIVATE, with 10 years of experience in influencer marketing, social media, digital media, venture capital, and investment banking. ACTIVATE partners with brands and influencers to tell engaging and compelling stories across social media, at scale. In the last 12 months, Activate has engaged over 75,000 influencers and creators, publishing more than 6,500 pieces of collaborated content per month.

Kamiu is passionate about the potential of the influencer marketing space, and has been quoted on the topic in WWD, Digiday, eMarketer, BusinessInsider, Business of Fashion, RetailTouchpoints, Glossy, Racked and more. Kamiu started her career in investment banking and venture capital, as well as business development and strategy roles at Rent the Runway, Refinery29, and Ralph Lauren. Kamiu holds a B.S. from Boston University and an M.B.A. from Columbia Business School.

How MarTech Leaders Unlock CRM Success in 2020 and Beyond

What’s in a Face? The Challenges and Rewards of AI-Fueled Facial Recognition