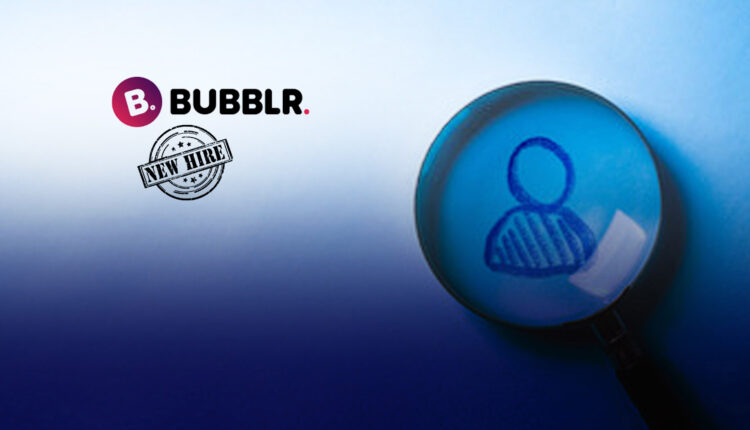 Bubblr Inc., an ethical technology company focused on the development and commercialization of mobile-first technologies, today announced it has appointed Rik Willard to its executive team in the position of Head of Strategy. Leveraging his deep international technology leadership experience, Mr. Willard will also join the Company’s Board of Directors.

This strategic addition reflects the next stage of Bubblr’s overall strategy to appoint the best US-based C-Suite candidates to the executive team in the next six months.

Bubblr began as a UK based technology start-up organization in 2016. It is now a US- listed entity (Bubblr, Inc.) listed with ambitions to become fully listed on Nasdaq within eighteen months. As part of this objective, Bubblr plans to become a predominantly US organization with US C-Suite executives and the bulk of its operations based in the US. Mr. Willard’s appointment is a key step of this transition.

The current leadership team now consists of two US based members: Rik Willard and Matt Loeb, the Executive Chairman. Steve Saunders, Bubblr’s CEO, is based in Ontario, Canada, while Steve Morris, Bubblr’s Chief Technology Officer, is based in the UK.

Rik Willard is a global technology specialist and is recognised for his expertise in emerging technologies such as blockchain and ethical tech. Rik was recently appointed as head of the Americas for the World Ethical Date Foundation (WEDF). WEDF is a global non-profit organisation that examines the opportunities and problems arising from the development of technologies that are opening unprecedented possibilities for knowledge and influence. Rik is also a member of WEDF’s advisory board. Rik has been an active Adviser to the Zicklin School of Business at Baruch College, and a Mentor at Pace University’s Seidenberg School of Computer Science. Rik has been a featured speaker at some of the world’s most prestigious technology events, including engagements at Davos 2018, The World Web Forum (Zurich), Harvard Business School, the Stern School of Business, and the Dow Jones Speakers Series. He has appeared as a digital and blockchain expert on CNN, CNBC, Cheddar TV, and was a featured writer for CNN International and a featured interviewee in the award-winning documentary “The Blockchain And Us”

Bubblr has designed and developed a novel proof of concept (PoC) blockchain product called Citizens Journalist (CJ). CJ utilizes blockchain technology to provide cryptographic certainty to mobile video, audio and photographic content as an antidote ‘to faked’ user generated content such as ‘deep fake’ videos. We are currently negotiating with suppliers to build production quality version of CJ, as Bubblr considers it a key product offering slated to help us establish a broad user distribution network.

Rik’s contacts and expertise in this area will be vital in these and other efforts.

“Rik’s appointment is the first of new C-Suite appointments Bubblr needs to fulfil to its ambitions to become a major technology player. The skills required to make a tech. start-up a success differ from region to region, and we believe our success will be based in part by managing and building a US-based multinational listed company. Bubblr believes it has the ability to radically change the internet and has defensible intellectual property protected by its US approved search patent. All Bubblr has to do ensure its success, is to recruit the best senior people and to ensure the company is properly resourced. We are already in discussions with other key C-Suite appointments to round out the leadership team.”

Equally AI Partners with Migdal Or – Lighthouse: On Mission to Provide People with Disabilities a Personalized Web Accessibility Experience