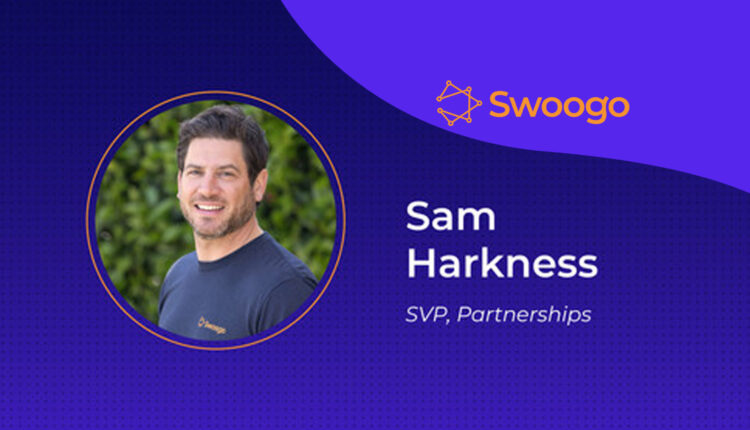 After a two-year tenure at Google Cloud—most recently as Head of Partnerships for Looker—Sam Harkness joins Swoogo as SVP of Partnerships, where he will oversee the global partner ecosystem. This move comes on the tail of a round of series B funding earlier this year, which allowed Swoogo to propel the growth of their platform.

“There’s nothing more rewarding than getting in early, and playing a major role in a company’s rapid growth.” Harkness said. “My goal is for Swoogo to be the most partner-friendly player in the event tech space. I want partners to love Swoogo as much as its customers do. And that’s a tall order.”

Harkness is no stranger to the path of a successful tech start-up. In 2018 he became the Director of Strategic Alliances at Looker, a global, multi-cloud data analytics platform founded in 2012. When Harkness joined Looker, he became an integral part of the partnership leadership team. Two years later, the company was acquired by Google Cloud for $2.6 billion, and Harkness took over as Head of Partnerships, overseeing the largest partner program integration at the time.

“Bringing on Sam is a huge step forward for Swoogo,” says CEO Chris Sykes. “Event professionals face overwhelming complexity from managing multiple vendors to execute in-person and digital events. Sam and I see an opportunity to simplify that complexity, and deliver value for our customers, by bringing together best-of-breed solutions under one roof.”

This wasn’t his first stint in an industry-famous company. He also served as Director of Alliances at Marketo for two years during a period of steep growth. Before Marketo, he held partnership positions at Turn (later acquired by Amobee) and Verisign. He brings this wealth of knowledge and experience to Swoogo.

When asked why he wanted to join Swoogo Harkness says, “I’m excited about events and bringing people together. With events, we didn’t know what we had until it was taken away from us.” Swoogo’s company mission is to empower anyone to bring people together through events, and that message resonates with Harkness. “Everyone has experienced the pain of the last two years, and no one really knows exactly what’s going to happen next. But Swoogo is poised to truly disrupt the events industry in the best possible way, and I jumped at the chance to be a part of that.”

You Can’t Protect What You Can’t See: Aceiss…