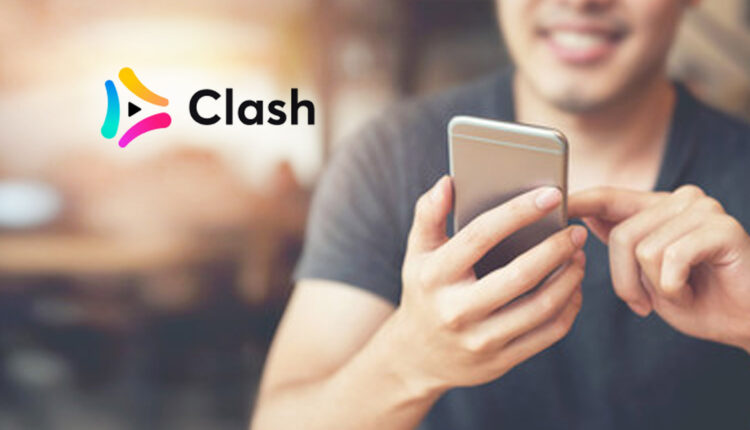 Clash, a next-generation platform and home for short-form video creators and their most dedicated fanbase, is excited and proud to announce that users have sent more than 4 million drops (digital goods with monetary value) to Creators in just three months. This shows that fans are willing and able to support their favorite Creators with more than 3,500 Creators earning from fans, friends, fellow users and other Creators. This support isn’t just for the top 1% of Creators, but Creators with followings of all sizes (as low as 150 fans) earning from the loyal support of their fans without the need for virality. Early indicators of success include:

“The initial reaction from Clash Creators and fans has been tremendous. The sheer number of drops that have been circulated alone is positive proof that fans are willing to support creators who are doing what they love, without the need for the creators to have millions of followers and over-produced content,” said Brendon McNerney, Co-Founder and CEO of Clash. “Everyone is a Creator on Clash, and everyone can earn. It is so rewarding to see this idea and concept take flight and watch as people make money doing what they love. As a former Creator, all I aim to do is make other Creators’ lives easier, and this is a remarkable benchmark on our journey.”

For some Creators on Clash, what they earn covers their rent, or groceries for the month, and for others an evening of take out, or maybe a little extra money to support other Creators. While Clash is a great platform for bigger Creators, Clash openly extends the opportunity to earn from creativity to the long list of Creators that have never been able to earn on other platforms before. More than 6% of ALL CLASH USERS, not only those that self-identify as Creators, are earning money since they joined the platform.

In the short time since she joined Clash, Christina Tessman (ChristinaASMR), who hails from Canada, is already earning enough to maintain a sustainable income as a full-time Creator. “I like Clash because it alleviates the pressure of having to go viral,” said Christina Tessman. “It’s more about connecting with my followers.”

Since Clash’s launch in October 2021, existing byte users and new Clash users have jump started the symbiotic support economy shared amongst all users. In addition to Drops, Creators are extending their creativity with Clash by fulfilling requests for content through FanMail, opening new communication channels with their biggest fans and releasing exclusive content through this feature.

The Creator Economy is becoming a fixture in society with more than 50 million Creators, professional and amateur, worldwide. Other platforms cater to the top 1% while everyone on Clash has the opportunity to earn regardless of audience size or content virality.

New engagement and audience segmentation features aimed at strengthening the relationship between Creator and fans will be announced and released in the coming weeks.