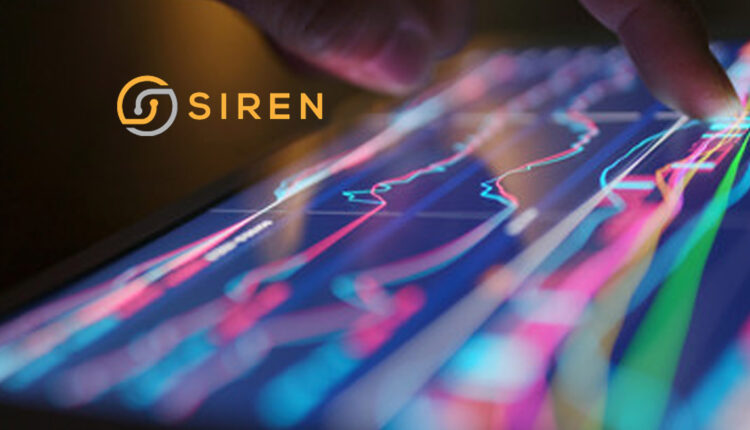 Siren, a leading provider of Investigative Intelligence analytics, announced the release of Siren 12.1. The latest version of Siren introduces several enhancements and improvements including 360 degrees data visibility, downloadable and editable reports, and data model scalability. The latest iteration of the Siren platform pushes forward what is achievable in the investigative world, launching new capabilities which have been developed in line with rapidly changing investigators requirements to generate insights at machine speed and scale.

The ability to see 360 degrees of information in a single screen is fundamental for investigators. Siren 12.1 provides extensions to facilitate obtaining 360 degrees views around entities (people, companies) – no matter where the original information resides. Siren 12.1 introduces the ability to generate a rich 360 degrees entity description. These are scripted interactive templates which show information about the record with data coming not only from the record itself, but also from connected records and web service calls. Templates can be visualized by clicking on the records, or they can be consumed as Word or PDF exports – and can be copy and pasted for easy editing and dissemination.

At the heart of the flexibility offered by this new report feature are two elements:

Dr. Giovanni Tummarello, Founder and Chief Product Officer, at Siren, said: “The new 360 degrees data visibility capability is a major step forward for our platform and aligns with the vision we have for investigative intelligence. We transform big data into actionable intelligence, helping investigators move away from the “swivel chair” approach. Our platform enables investigators to access disconnected systems and retrieve pertinent information quickly and efficiently. 12.1 further enables law enforcement analysts to spot never before seen patterns in investigations as the requirement for advanced correlation analysis on multiple datasets becomes an industry driver. This is an important release for our clients in Law Enforcement, National Security, Cyber Security and Corporate Risk and Compliance Management”

In big data investigative environments analysts use rich relation vocabularies across a matrix of up to 100 different entity types. This leads to potentially thousands of valid “source/destination” combinations which, in the Siren data model, can be modeled as thousands of individual relations. Siren 12.1 extends the data model scalability to comfortably deal with these relations due to usability and scalability improvements.

The data model relation page has been optimized, while the data model graph browser can now show relations between the same entities in aggregated forms.

It is common for analysts to want to see the same results from a different point of view. For example, when visualizing a set of companies, they may want to take a geographical view or a financial view. In Siren 12.1 analysts can pivot from a dashboard view to another via filter-based pivoting, which is available whenever there is an alternative dashboard view in the dataspace.

In Siren 12.1 users can create subsearches and use them in dashboards so that all the visualizations will inherit the subsearches filters. For example, if analysts have an index of communications, i.e., SMS, phone calls and emails, they can now create three subsearches to the main communication index and use them to create dashboards in a way that will look like they have three separate Entity Tables – yet all relationally connected as their parent communication search. This, in conjunction with Siren’s ability for components to inherit the search from the dashboard makes it easier to have dashboards specific to types and subtypes – in a way that is maintainable, without duplicating components.

Previously, aggregates on a graph would only show the counts of the intermediate records. Now it is possible to select metrics like sum, max, min, and average. In addition, Siren 12.1 introduces a sorting/regrouping function, which can be accessed on the right mouse button and places a set of selected nodes in a group.

Siren already provides entity resolution capabilities to detect that two or more records are referring to the same real-world entities. But with Siren 12.1 it becomes easy to launch record consolidation jobs which create “centralized records”, providing at a glance the full view on the entity. This can be achieved in real-time in one click, with the option of precomputed consolidated views.

A core feature of the record consolidation is the capability of using multiple primary keys. This means that one can specify a set of identifiers (e.g., phone numbers, social security number, email) and if any of these match across all the combination of records then an interactive consolidation operation will occur. The result is smart, comprehensive consolidation unearthing insights from all the organization’s datasources.

Streaming Ad Platforms And Their Benefits