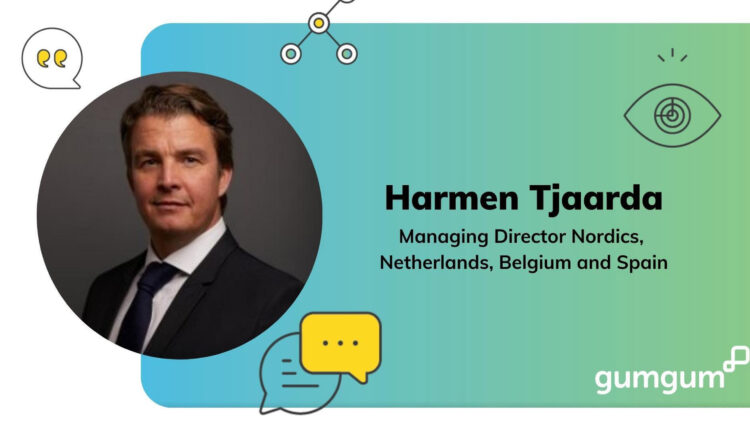 Harmen Tjaarda, the co-founder of JustPremium, a GumGum company, is set to become Managing Director of GumGum Belgium, Netherlands, Nordics and Spain. In his new role, Harmen will oversee these four critical markets as GumGum continues its European expansion.

Harmen began his career in finance before becoming Head of Trading and Optimization at AdRepublic. He co-founded JustPremium, the world’s first programmatic rich media ad exchange, in the Netherlands in 2012 and has also spent many years working in the US. In the wake of the acquisition, he became SVP, Strategic Development & Customer Success EMEA at GumGum.

Harmen Tjaarda says: “We have been on a mission to bring true creativity to digital for many years and the introduction of GumGum in Europe allows us to expand that mission. We can’t wait to guide our clients using our best-in-class contextual solution and high-impact creative offering to achieve their goals with a privacy-first mindset.”

Marketing Technology News: GumGum Partners With the Ad Council on Support for Ukraine

His team will also take responsibility for introducing GumGum’s Mindset Matrix in Belgium, Netherlands, Spain and the Nordics. The Mindset Matrix is a framework developed to support advertisers in their mission to provide value within digital environments without reliance on personal data. Its three pillars are contextual understanding, dynamic ad creative and the ability to measure attention and optimise campaigns in real time.

Peter Wallace, SVP of Sales, EMEA adds: “With the combined technologies of GumGum and JustPremium we now have all the ingredients in-house to empower advertisers to deliver creative advertising campaigns that capture consumer attention without the use of personal data – and at scale. This means bringing optimal solutions to advertisers’ campaign objectives. GumGum offers a digital advertising ecosystem and bespoke, groundbreaking creative formats for both display and video based on the in-depth understanding of a consumer’s active frame of mind, thereby building a more sustainable future for consumers, publishers and advertisers alike.”

GumGum now has over 400 employees and is present in 19 markets worldwide. It works with more than 75% of Interbrand’s top global brands, such as Canon, Jeep, Mini Cooper L’Oreal and Verizon. Trusted by all of the major agency holding companies, it works across 30,000 publisher partner websites, its global ad platform reaching over a billion unique users per month.