The report, which compares video ad serving metrics from Q2 2016 to Q2 2017, finds evidence that advertisers are putting out better video content and consumers are responding in kind. Specifically, viewability, completion rates and time spent metrics have all significantly increased from this time last year.

Key Highlights of the report

– The average amount of time viewers spent watching video ads has increased across the board by 19%.

– Completion rates are up by 20%, with a 36% increase for premium publishers since this time last year.

At the time of the announcement of this report, we spoke to Dascha Bright of Extreme Reach to understand how different video ad formats are making an impact on customer experience, viewability, and retention.

Dascha Bright has lead client service teams supporting ad technology for many years, including at Atlas, Microsoft, and Razorfish. Recently promoted from VP of Digital to Senior Vice President of Account Management, which is a new role, Dascha oversees all client relations across Extreme Reach’s TV, Video, and Talent accounts, getting the bird’s-eye view into how advertisers and agencies deploy their campaigns across screens.

Under-30 Seconds Ads Have Near-Identical Completion Rates on Video

Most advertising leaders feel that shorter videos make a larger impact. We asked Dascha how much of it does she attribute to video ads served on mobile. Dascha said, “While platforms like Snapchat and Instagram have made the idea of six-second ads popular, I’ve actually been noticing a tendency toward more creative 15 or even 30 second video ads that, despite being of a traditional TV ad length, tell stories in a way that’s meant to be viewed on a mobile screen. In an analysis conducted one year ago by eMarketer, 30, 15 and less-than-15 seconds ads actually had near identical completion rates on video, which says to me that a great ad is something people are willing to watch, regardless of length or platform.”

We were curious to know how could video ad platforms demonstrate more accountability towards declining GIVT. Dascha explained to us that the advertisers and agencies are holding their media vendors more accountable for bad inventory. She mentioned, “At Extreme Reach, we have a very strong filter for GIVT and we actively help our customers work with media vendors to develop plans to blacklist sites and IP addresses that contribute to high-frequency, seemingly non-human traffic.” 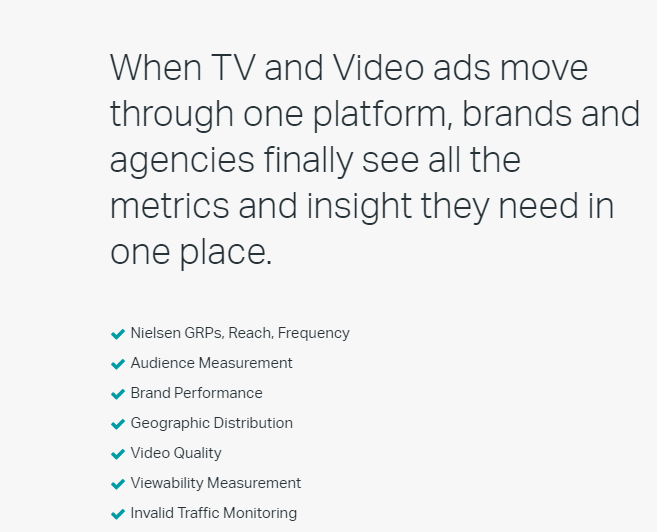 She added, “Extreme Reach is registered and verified by TAG (the Trustworthy Accountability Group) which has many programs to reduce invalid traffic and fraud in the digital advertising ecosystem.”

With stringent data privacy laws coming into the picture, we asked Dascha if the newer data privacy guidelines make it harder for video advertisers to deliver better Customer experience and relevant brand messaging with ads. Dascha told, “While data obviously plays a key role in delivering relevant ads to the right consumers, the creative brand messaging of an ad is often based more on in-depth behavioral research that goes far beyond simple online data mining.”

She added, “Quality video ads are stories told to elicit a consumer response – this creative process won’t change. But making sure that these ads are shown to consumers that will appreciate them the most do require an element of data-driven, targeted delivery.”

Thank you, Dascha for speaking to us.

Small Video Players like Mobile is on the Rise.

In addition to the above data highlighting an industry wide improvement in video ad impact, Extreme Reach’s benchmarks report also found evidence that:

– Changes in Click-through rate (CTR) demonstrate changing screen preferences. Media aggregators, which most commonly run the bulk of their impressions on the desktop, experienced a 54% increase in CTR. Premium publishers, which are running more impressions on mobile/tablet and Connected TV, saw a 37% decrease in CTR over the past year.

– Vendors are being held more accountable for bad inventory. General Invalid Traffic (GIVT) is down by 33% since Q2 2016.

– Mobile is on the rise. Small Video Players, which are defined as less than 400×300 in pixels, saw a jump in usage. These players are most popular for mobile impressions.

– In-banner video ads are on the decline. There was a 17% drop in video in-banner ads over the last year.

Dascha Bright, added, “Through our most recent Quarterly Benchmarks Report, we’ve noticed trends that attest to the ever-changing face of video advertising. As the Ad Cloud and workflow platform of choice for thousands of brand advertisers and agencies across the country, we have a birds-eye view into video ad placements and consumer response, which are shaping the way ads are deployed.”

This is the inaugural public release of Extreme Reach’s Quarterly Benchmark Report based on the company’s third-party video ad serving data, which is MRC accredited for Viewability. It is conducted with the goal of providing visibility into changes in video advertising usage and metrics. Extreme Reach is the creator of the premiere workflow management system for the advertising industry, which streamlines every stage of a video ad’s lifecycle. From its Ad Cloud, video assets are easily served to every screen and device, ensuring complete Talent & Rights compliance and giving brands and their agencies full control and over where those assets play.

Currently, Extreme Reach offers the only enterprise technology designed distinctly to bring together the TV and Video ad workflow and all aspects of Talent & Rights management in a single, easy-to-use cloud platform. The singular platform and one process make brand advertising easier and analytics more insightful, with the assurance of rights compliance wherever ads play.

Three Lessons for Advertisers from Game of Thrones

Microsoft To Join Partners And Consumers IoT Expo and WCIT 2017

Vidoomy Integrates Bids with to Accelerate Its Integration With New Buyers

Nutanix Appoints Sohaib Abbasi to its Board of Directors