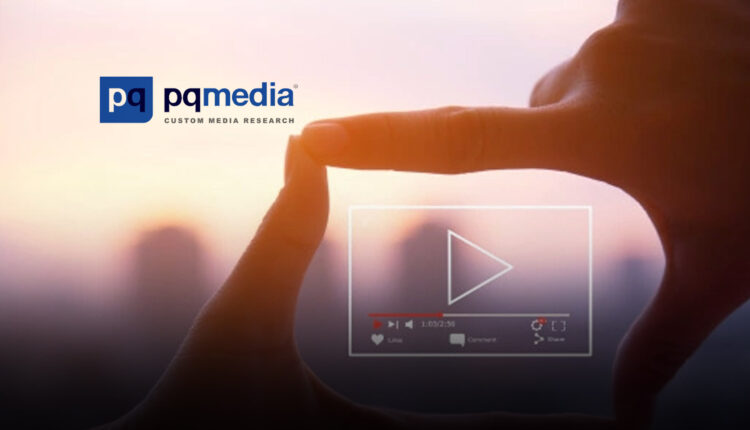 Global consumer spending on media content and technology grew an estimated 6.1% to $2.012 trillion in 2020, driven by the COVID-19 lockdown that kept consumers at home binging on multiple forms of digital entertainment as relief from the pandemic, according to new research from PQ Media®.

Global consumer spending on media content and technology grew an estimated 6.1% to $2.012 trillion in 2020, driven by the COVID-19 lockdown that kept consumers at home binging on multiple forms of digital entertainment as relief from the pandemic, according to new research from PQ Media. The gain was a sharp acceleration from the 3.8% growth in 2019, signaling the fastest expansion in both global and US consumer media & tech spending in five years, fueled by surging expenditures on streaming audio and video subscription services, and digital and console-based videogame software and hardware, according to PQ Media’s Global Consumer Spending on Media Forecast 2020-2024.

“Nevertheless, PQ Media expects the growth of consumer spending on media content and technology will begin to decelerate markedly in 2022 and 2023, as many of the pandemic-driven forces that sparked the atypical end-user spending splurge in 2020 begin to fade in the second half of 2021, as the COVID-19 vaccine rolls out worldwide, adult workers begin returning to office buildings and children start repopulating physical schools,” said PQ Media CEO Patrick Quinn. “We forecast last year that consumer media spending would likely reach an inflection point and stop growing in 2023. While the pandemic briefly interrupted key secular trends in 2020, this was a near-term disruption of long-term trends that will resume in the 2021-2024 period, such as the deceleration of growth or outright decline of expenditures on print newspapers, magazines and directories, as well as mobile phones, DVDs and in-theater movie tickets.”

Overall digital media content devices was the largest of the nine major digital and traditional media platform categories in 2020, generating $440.5 billion, while digital content subscriptions was the fastest growing, up 20.7%. The shift to digital media content and technology is clearly evident in the 12-point shift in market share to digital from traditional media in the 2014-2020 period, as the digital segment now commands 71.1% of all consumer media outlays, according to the Global Consumer Spending on Media Forecast 2020-2024.

Consumer spending on all media content & tech worldwide averaged $352.96 per capita in 2020, up 5.3% from 2019, driven by strong growth in digital media streaming services. Of the 28 digital media categories, the fastest growing in 2020 was digital audio subscription services, which rocketed 40.0% to $30.98 billion worldwide. The growing popularity of podcasts was among the primary drivers behind the double-digit increase, as Spotify, iHeart and Amazon all dived deeply into podcasting in 2020, striking numerous deals involving new talent, content and ad services. The number of US podcast listeners grew more than 30% to more than 100 million in 2020, when Spotify acquired sports and pop culture network “The Ringer” and the exclusive rights to “The Joe Rogan Experience,” while Amazon Music and Audible added over 100,000 new and original podcast channels and shows, featuring celebrities like DJ Khaled and Will Smith.

Meanwhile, consumer spending on traditional film & home video plummeted 46.2% in 2020 to $43.05 billion. “While we expect to see an uptick in the growth of in-theater movie ticket sales in 2021 and 2022, albeit versus extremely deflated comps in 2020 and 2021 – PQ Media believes that physical movie ticket spending, as well as the entire film & home DVD category, will never again reach the high water mark of nearly $85 billion in 2019,” Quinn said.

A good portion of the near-term growth in movie ticket sales will be the result of the staggered delays of blockbuster movies throughout the 2020-2024 period, due to the plethora of halted productions during the pandemic lockdowns. “Perhaps even more critical is the massive shift to streaming video services in recent years, which was amplified by the stay-at-home orders in 2020 and further accentuated when major studios decided to test the streaming waters by launching several hit movies via OTT video services in 4Q20,” Quinn added.

Among the studios that took the leap – and much criticism from theater chain owners and traditionalist producers, directors and actors – were Disney, which debuted both “Mulan” and “Soul” on its Disney+ service, and Warner Media’s simultaneous release of the much-anticipated “Wonder Woman ‘84” in theaters and on HBO Max.

While videogames tend to buck trends in typical years, with spending slowing down or declining prior to major hardware upgrades, this was not the case in 2020, as digital videogame software and hardware spending on multiplayer online games, various gaming apps, in-game microtransactions and traditional console-based gaming all surged throughout the year – even before the long-awaited releases of Sony’s PlayStation 5 and Microsoft’s Xbox Series X in 4Q20.

Exemplifi Wins at the Web Excellence Awards 2022 for Website…