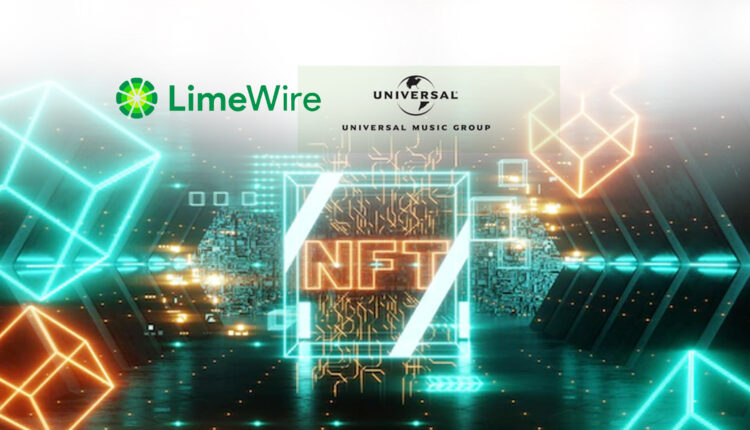 UMG artists can now offer audio recordings, audiovisual content, backstage footage and any artwork and images as NFTs on the LimeWire marketplace and sell them directly to fans and collectors.

LimeWire and UMG will focus on quality content, utility and accessibility for the mainstream by offering unique NFT projects for artists and fans in a trusted environment.

LimeWire, a digital collectibles marketplace, announced that it has struck its first major music label partnership with Universal Music Group (UMG), the world leader in music-based entertainment, and will collaborate on making digital music collectibles accessible to a wider audience. UMG artists, as well as many of its iconic record labels including: Interscope Records, Republic Records, Def Jam Recordings, Capitol Records, Motown Records, Geffen, EMI, Virgin Music and more, will be able to leverage the LimeWire marketplace as an additional platform to explore unique ways to engage with fans through digital music collectibles and Web3, and generate new revenue streams. As part of this partnership, UMG will provide licences that will allow LimeWire to partner with UMG artists in order to launch innovative music-based NFT projects utilising the LimeWire marketplace.

In March, LimeWire announced it is relaunching later this year as a mainstream-ready digital collectibles marketplace for art and entertainment, initially focusing on music. It will be a one-stop marketplace for artists and fans alike to create, buy and trade NFT collectibles with ease. This month, LimeWire announced it has raised USD $10.4M in a private sale of its LMWR token led by large VC firms, Deadmau5’s 720Mau5 venture fund, as well as DAO Jones, a group of investors consisting of high-profile members from the music industry, including well-known electronic music artist Steve Aoki.

“We see this partnership as a true demonstration of the pace at which the music industry is embracing Web3,” said Paul and Julian Zehetmayr, LimeWire Co-CEOs. “We’re thrilled to open up the LimeWire NFT ecosystem to Universal Music Group artists and fans and can’t wait to see the first creative projects being launched on the marketplace.”

Using LimeWire, artists signed to UMG can now offer audio recordings, audiovisual content, backstage footage and any artwork and images as NFTs on the LimeWire marketplace and sell them directly to fans and collectors. Musicians can release bonus tracks and exclusive material, sell uncut or backstage content, and much more.

“Universal Music Group has always prioritised its artists’ creativity and valued fans’ desire to engage in innovative new ways. Now, NFTs are providing an exciting vehicle to enhance this connection between artists and audiences. This is why we are delighted to have partnered with LimeWire, who is focused on guiding everyday users into this expansive arena, in this new era of Web3 engagement and music appreciation,” said Jonathan Dworkin, EVP, Digital Business Development & Strategy at Universal Music Group.

“Universal Music Group and our labels are fully embracing the exciting Web3 space and will work with our new partner LimeWire, our artists and their communities on engaging NFT projects with real utility and creating cool experiences for fans, while allowing mainstream consumers to participate in a safe and trusted environment with low entry barriers,” said Holger Christoph, Universal Music Group Senior Vice President of Digital Business, Central Europe.