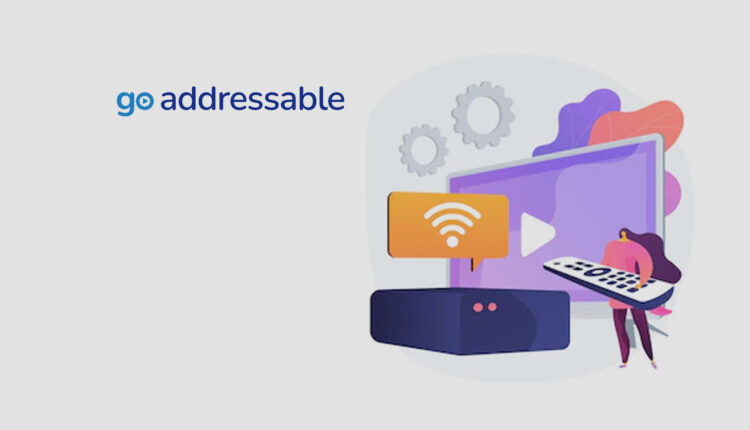 The goal of the guidelines is to inform and allow for appropriate agency planning and expectations of campaign launch schedules, and to drive confidence through efficiency and consistency in processes and implementation. They are outlined in detail at GoAddressable.com.

“We’re at an important time in the trajectory and future of addressable TV advertising, and we’re excited to be one of the inaugural Go Addressable agency forum participants”

Today’s announcement marks a milestone in one of the initiative’s stated goals to provide clear steps for all advertisers interested in buying addressable advertising. It also comes as the addressable TV advertising landscape is expected to grow to U.S. $7.5 billion dollars globally in 2022, per a Deloitte Global study. Addressability, too, was a key theme during this year’s upfronts.

“We’re at an important time in the trajectory and future of addressable TV advertising, and we’re excited to be one of the inaugural Go Addressable agency forum participants,” said Michael Piner, EVP Advanced Media, Mediahub Worldwide. “Addressable TV advertising is a fast-growing and promising new frontier in media. Yet, we’ve lacked an industry group to help simplify the addressable activation as well as chart a course for future progress and innovation. We’re happy to be working with Go Addressable to help pioneer that course.”

To ensure that it is working to address the needs of the industry, Go Addressable today also introduced two committees, one comprised of agencies and the other consisting of programmers. Both committees will meet twice a year and will include advertising companies and programmers from across the industry.

“While addressable has been around for 10 years, it’s still in its early stages, and because of that, many providers are using different criteria and guidelines to deploy it,” said Matt Van Houten, SVP, Product, Operations and Business Development, DIRECTV Advertising. “This has caused unnecessary complication and friction in the process. With the unveiling of our easily accessible industry guidelines, all advertisers can be comfortable with the medium, knowing these guidelines are supported by many of the distributors operating in the space. And this is exactly why Go Addressable was created. By working together, we are providing more paths to acceleration for the medium.”

Below is a summary of the aforementioned guidelines:

“Consistency is critical in advertising and is something that previously hasn’t existed for addressable campaigns, which are often executed across multiple operators. The industry guidelines created by Go Addressable give programmers a roadmap and guidelines that can be utilized when activating addressable campaigns across a national footprint. There is a lot of exciting work happening and we look forward to participating in the programmer council as we continue to scale our already robust addressable TV advertising capabilities for our clients,” said Julian Zilberbrand, EVP, Advanced Media, Paramount.

Marketing Technology News: Giving Through Gaming – How Publishers Can Help Good Causes Through Their Games

Engage Launches New Integration With Microsoft Teams for the…

Humana ranked No. 1 Among Health Insurers For Customer…