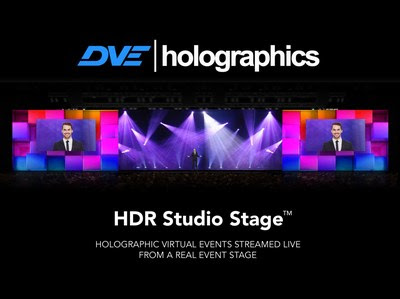 Speakers can be live at the HDR Studio Stage™ or can be remotely transmitted from smaller studios, corporate HQs, and even home-based studios.  DVE made world news transmitting Stephen Hawking live from his home in Cambridge, England to the Sydney Opera House .  The end result is a totally virtualized event production that uses a massive corporate event stage with real and hologram individuals, creating a seamless mixed reality live event that is streamed to massive online audiences.

DVE has produced shows around the globe for over two decades and pioneered holographic augmented reality communications.  Their industry leadership is well known. DVE’s patented technologies include holographic telepresence using OLED, LCD, projection, and massive direct view displays.  DVE originally pioneered holographic telepresence using reflected displays. That evolved into numerous patented inventions for DVE’s 3D Light Mesh™.  Now, after years of development, DVE has taken another major step forward by creating HDR holography™.  No glasses or head mounted displays are required.  HDR (High Dynamic Range) Holography sets the bar so high in realism, audiences, even only feet away, believe they are looking at a real person on stage.  Now these ultra-realistic appearing individuals on stage can be captured for live corporate productions and streaming broadcasts.

DVE supports event planners and creative agencies to help bring their clients event vision to fruition.  According Steve McNelley, CEO of DVE, “Virtualized events are now radically improved into stunning broadcast shows. Artificial green screen sets simply could not deliver the quality needed and that is what drove us to innovate the technology and business models to utilize hotel and convention center partner facilities.  Now, with rapid installation, DVE converts their facilities into Hollywood broadcast soundstage studios.  Event planners and creative agencies have a whole new medium to make great events.”

DVE is now establishing hotel and convention center partners to become premier facilities for the HDR Studio Stage™.  The stage studio can be set-up for a single event and also be semi-permanently installed, permitting recording of corporate shows back-to-back, week after week.  Also, DVE partners with event show producers and their local labor.  The DVE HDR Studio Stage™ can be quickly adapted for many different types of event stage appearances.

DVE is now conducting demonstrations at its experience center in Orange County, California.

Studios.  The focus is primarily not on the local audience, but with the online audience of tens of thousands of attendees. In fact, no local audience is needed to create an impressive fully virtualized online event.  Also, even the event speakers need not be physically present. Speakers appear absolutely real on stage as holograms walking about the studio event stage.  Subject of numerous patents of DVE in live production, augmented reality, and telepresence communications, the HDR Studio Stage™ creates a whole new category of live event experience for massive online audiences.

Sendoso Launches New Features on the Sending Platform to…

Why Now Is the Best Time to Deploy an SMS Marketing…