Interactive Experiences: How Real Life Imitates Art—or At Least TV and the Movies 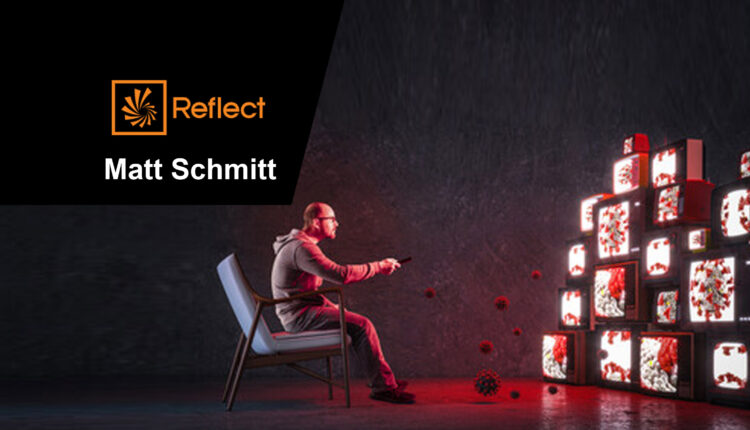 Entertainment and pop culture have always captured our imaginations with possibilities of how technology will unfold in our distant future. Some of those wild “predictions” may never come to pass—for example, will we ever have warp drive or matter transporters? Yet, in many ways, science fiction has played an influential role in the evolution of how we interact with technology.

From movies to video games, there are many examples of technology inspired by concepts dreamt up and presented as entertainment. In the 1960s, shows and movies like Star Trek and 2001: A Space Odyssey reshaped our notion of what computers could do, how they would look, and how we would interact with them. Each successive decade has seen some of those ideas come to fruition—without waiting for the 22nd or 23rd century: Computers you control by voice with natural language interfaces. Touchscreen control panels and video calls. Facial recognition and artificial intelligence. Who honestly believed many of the technologies and interactions portrayed in Odyssey would become commonplace just decades after its 1968 debut?

Not every milestone in the evolution of interactive experiences was foretold this way, of course. But let’s take a look at some pivotal moments that defined interactivity as we know it today and how they may have been inspired, at least in part, by these media.

The birth of real human-technology interactivity: The Personal Computer

Today, computers are accessible to almost anyone, are portable, and can fit in the palm of your hand. They are so small and commonplace they are embedded in practically every device we own—even electric toothbrushes. But until the mid-1970s, a single “computer” filled vast rooms and was something only engineers understood. The idea of owning a computer—or more than one—wasn’t even the stuff of dreams.

When Apple introduced the Macintosh in 1984, the ordinary person could finally own a desktop computer. Of course, the keyboard was the primary input device of the time, with a few tweaks that only early programmers understood. (Look closely, and you may spot a keyboard and paper printer in the pilot episode of Star Trek 20 years before the Macintosh.) But besides typing commands on a text-based screen, introducing the mouse empowered us to connect with the world with just the click of a button. And a graphical user interface—however primitive compared with today—defined the first “real” interactivity between man and machine. To this day, it remains one of the primary ways we interact with technology.

Smartphones continue the evolution of the interactive experience

If personal computers made the world accessible with a click, smartphones put that world in our hands and turned the definition of interactive experiences on its head. Before smartphones, we used mobile phones for basic phone calls and text messaging, so they had the same 12 buttons you’d find on a push-button telephone in your home, plus two or three more. But when Apple introduced the iPhone (and iPod Touch) in 2007, it would completely change how we humans interact with our devices. It also made our fingers the input device—20 years after Star Trek: The Next Generation replaced the Enterprise’s buttons with touch panels.

A whole new interface for mobile communications, smartphones also introduced a new class of devices and interactivity. Other mobile phone manufacturers quickly took the cue, and tapping and swiping replaced physical buttons, keyboards, and mice. These mobile computers came complete with a camera and “apps” for music players, calendars, even documents and spreadsheets, and more. Every imaginable application soon followed—from video games to office productivity to GPS mapping and entertainment. As Apple was fond of saying, whatever you could imagine, there was an app for that.

What science fiction fan can forget the crew of Discovery One talking to the HAL-9000 computer in 2001: A Space Odyssey? Since then, almost all sci-fi entertainment depicts humans using their voice and natural speech to operate and control devices. And why not? Humans were talking long before we discovered written language and grammar. However, interpreting the intricacies of even one language is complex, and there are over 6,500 languages on planet Earth. So, voice interactivity has been the stuff of fantasy—until recently.

Since 2014, “voice assistants” have become mainstream—Amazon’s Alexa, Google Assistant, Apple’s Siri, and others—with varying degrees of intelligence and adoption. Powered by advanced artificial intelligence, these assistants are accessible from smartphones, smart home devices, appliances, even automobile infotainment systems. You can ask an assistant to read your messages, solve math problems, tell a joke, read a bedtime story—even get directions to the closest Italian restaurant. And you can be reasonably confident that it will understand your request in your language of choice.

The future of interactive experiences is here today

Computers on every desk and in every palm—done. Evolution from typing to point-and-clicking to tapping and swiping on touchscreens—done. Controlling devices and experiences by voice and gestures—also done. While these forms of interactivity continue to evolve, we must wonder what will come next.

It’s no surprise that brands and consumers now rely on and expect a higher level of interactive experience—at home, online, in cars, in stores, with virtual support, or chatbots—everywhere. They want personalized interactive experiences that enable control of personal devices via their voice, gestures, and smart devices, as well as public devices like in-store digital signage screens, motion sensors, video and music feeds, and more.

To thrive in an ever-advancing technology space, organizations can and will have to provide those experiences. And while we don’t yet have to provide an interactive experience to let anyone single-handedly pilot a starship (yet), we’ll conquer the complexity of such feats bit by bit. I guess the film industry will just have to imagine even more novel ways for humans to interact with technology in the future.

Matt Schmitt is one of the pioneers of the digital signage industry. After helping establish Broadcast.com and assisting with the acquisition of the company by Yahoo, Matt developed technology to help address the challenge of delivering rich media experiences over resource-constrained networks. This technology formed the basis of ReflectView, now one of the most advanced, scalable, flexible digital signage platforms. In his role at Reflect, Matt helps clients define and execute digital signage strategies that deliver compelling business outcomes.