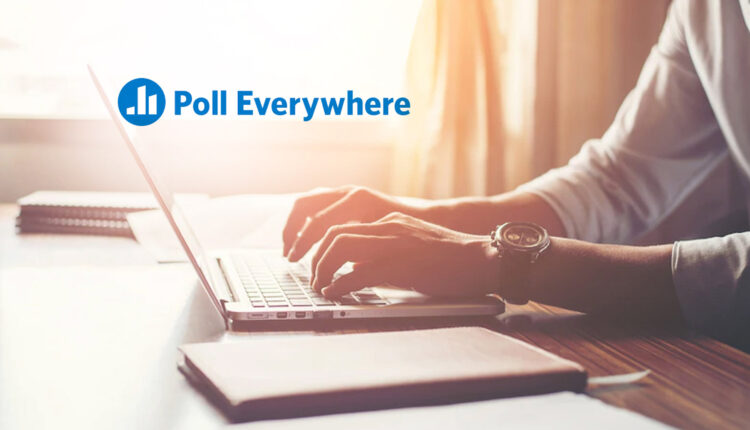 Poll Everywhere, the world’s first real-time audience response technology accessible on any device, announced the restructuring of its executive leadership team. After almost 14 years of leadership, co-founders Jeff Vyduna and Brad Gessler will pivot from their respective day-to-day roles as CEO and CTO to focus on their roles as part of the Board of Directors.

Marketing Technology News: Snigel Recognized By The Financial Times As One Of Europe’s Fastest-Growing Companies For The…

“The pandemic was such a critical inflection point in our industry, and our team and product rose to the challenge. Robert, Kim, and Matt have been instrumental in that change, and we couldn’t be more happy to pass them the torch.”

As of March 1, 2022, the continuing executive leadership team now includes:

In their new roles, they will actively manage and set the organization’s mission, vision, strategy, and resources to drive Poll Everywhere forward as the best-in-class managed enterprise solution for remote and hybrid work.

“We are really proud of what we co-created here, and it’s exciting to step back and acknowledge how unique this place is,” said Jeff Vyduna, co-founder and former CEO of Poll Everywhere. “The pandemic was such a critical inflection point in our industry, and our team and product rose to the challenge. Robert, Kim, and Matt have been instrumental in that change, and we couldn’t be more happy to pass them the torch.”

Robert Graham started with Poll Everywhere in 2014 as a growth hacker and worked through the ranks to become the company’s Chief Revenue Officer. Kimberly Harris started as a recruiter who had worked in higher education and has been with the company for almost three years. Matthew Diebolt, an engineer by trade, has worked in some capacity in almost every technical role at Poll Everywhere during nearly 10 years at the company. Each has proven their ability to build high-performing teams, learn and adapt to new roles, and move the company forward in their tenures.

“Kim, Matt, and I are thrilled to take Poll Everywhere into its next chapter with expansion to the enterprise,” said Robert Graham, CEO of Poll Everywhere. “Many things will stay the same, like our company culture that promotes caring, inclusion, and the same trust and autonomy that allowed each of us to evolve into leaders here. It’s exciting to have the opportunity to implement ideas from our experiences with the product and company, as well as those of our peers and customers. There is already so much about the future of Poll Everywhere that we’re excited to share throughout 2022.”

ManageEngine Releases SaaS Version of Analytics Plus to…