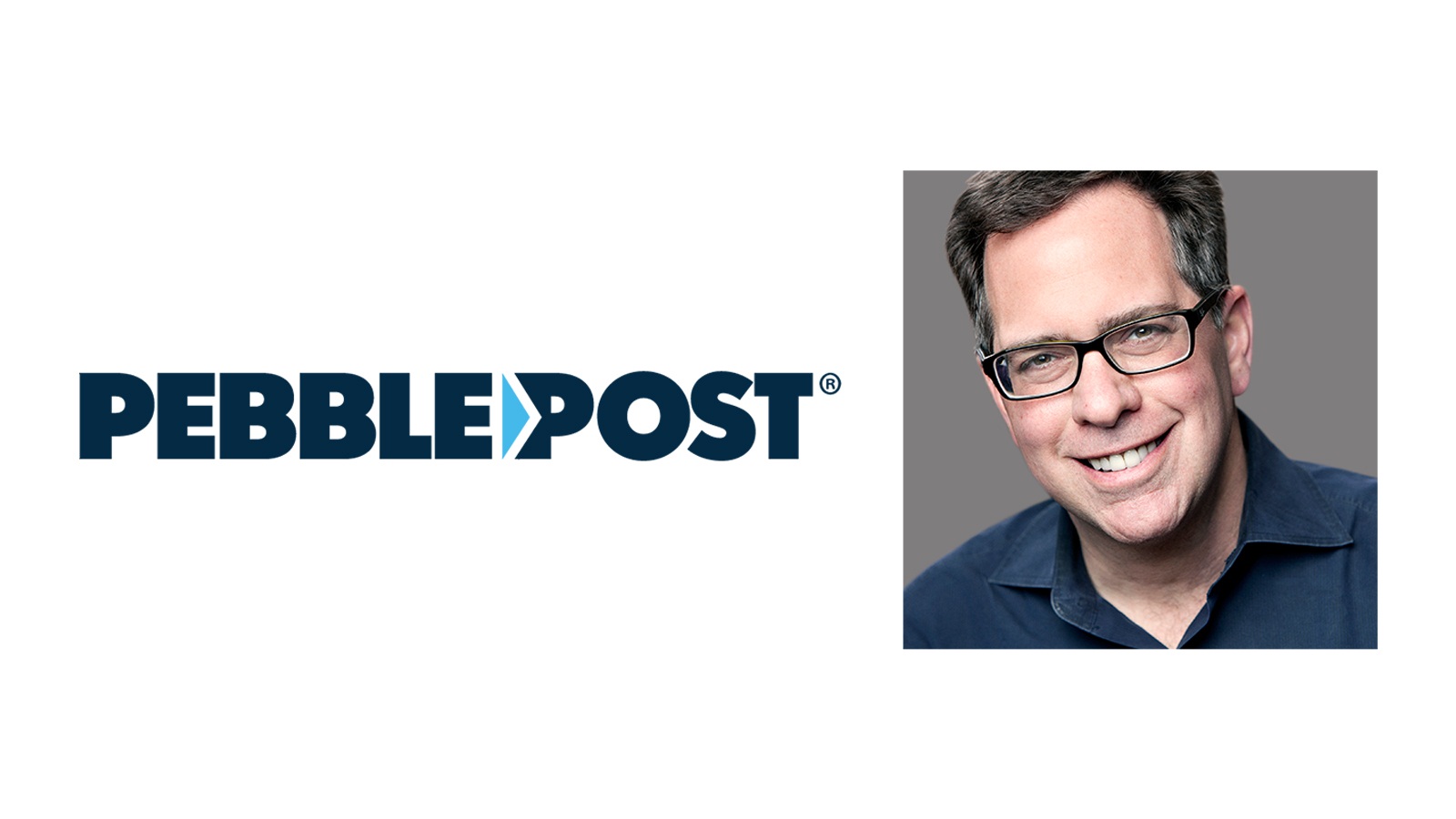 MTS: Tell us a little bit about your role and how you got here. (what inspired you to start a martech company)

I’m PebblePost’s co-founder and CEO, but prefer to be known as the “Chief Stamp Licker”.

And by the way, you mean another martech company. I’ve been at this for more than 15 years, starting way back when I was on the venture side and I put together the largest portfolio of re-targeters.

It’s funny — when I bring that up in presentations today, people groan and say, “Oh, you’re the guy who enabled the technology that now chases us all around the web with these ads…” But that’s not what it was supposed to be. The idea was to enable a relevant, respectful dialog between the marketer and the consumer. That’s something that got totally lost in digital, and that’s what we’re trying to get back to at PebblePost® with Programmatic Direct Mail®.

MTS: Given the massive proliferation of marketing technology, how do you see the martech market evolving over the next few years?

The big change will be getting data integrated to where you can actually make programmatic decisions across channels. That will be true omnichannel marketing, as opposed to multichannel marketing, which is really just an old-fashioned shotgun approach using new technology. Omnichannel is already happening to some extent in digital.

There’s some programmatic optimization between display and video. That’s great training wheels for the process. It shows where it could truly go. Going cross-channel enables you to defeat pain points within each channel while leveraging strengths. I see that growing in 2017 and becoming a monumental sea change five years down the road.

MTS: What do you see as the single most important technology trend or development that’s going to impact us?

Technology has progressed to the point that many companies are no longer doing market research, they’re doing market surveillance — and it’s often covert. The ability to conduct ambient listening and other forms of digital snooping is really disturbing. When I first started talking about this more than five years ago, people looked at me funny. But as I said a moment ago, I built the largest portfolio of retargeters — and I know what my CEOs were asked to do.

Now hardly a week goes by without another story emerging of a company that got caught committing a privacy violation, like Vizio’s recent FCC settlement. What a terrible thing for consumer confidence. It’s vital that the martech industry begin policing ourselves.

It isn’t a question of making the technology work. Overly efficient technology is actually part of the problem. So the challenge now is not just to leverage technologies for efficiency but also for efficacy. And in my opinion digital advertisers have forgotten that last word. In fact, they’re making the situation worse because the technology is so efficient that they’ve flooded the market with ads. And even as efficacy fell, they still got great efficiency.

So they said, “Well, let’s just do more.” That’s created a backlash virtually identical to what happened in the direct mail industry as it devolved into junk mail. As a consequence, I think we’ll see more and more CFOs demanding greater return on ad spend from their CMOs.

MTS: What startups are you watching/keen on right now?

MTS: What tools does your marketing stack consist of in 2017?

Our marketing stack is fluid. We’re using tools that align with our goals and what we hope to achieve each quarter, and optimizing when and where we see success. So, Salesforce and HubSpot are central in addition to Slack, Asana, Google Analytics, HootSuite, MailChimp and others.

MTS: Could you tell us about a standout digital campaign? (Who was your target audience and how did you measure success)

To be honest, I think that’s the wrong question at this stage of the martech evolution. To be successful, a 21st century marketer has got to stop compartmentalizing and start integrating. To think of any campaign as strictly digital — or television or print of whatever — is to miss the bigger picture that’s starting to take shape.

MTS: How do you prepare for an AI-centric world as a marketing leader?

First of all, you have to remember that any new marketing tool, even one as sophisticated as AI, is just that — a tool. It’s important that we learn from the mistakes in digital and avoid looking at AI as the solution to every problem. Because then it becomes a hammer in search of a nail. You need to identify your goals as a marketer and then work backward and figure out how to use AI — or any other technology — to meet them.

Anytime you fall in love with technology for its own sake — you know, “Wow, imagine what we can do with this?” — you’re headed for trouble. If the abuses of digital taught us anything, it’s this: Just because you can do something doesn’t mean you should.

MTS: One word that best describes how you work.

Empowering others to run their portions of the business as the CEO of their department.

MTS: What are you currently reading? (What do you read, and how do you consume information?)

Books are my go-to’s, whether fiction or nonfiction, about endurance. For example, The Shackleton’s Incredible Voyage, In The Kingdom of Ice, The Long Road, and A Higher Call about World War II, which I just finished and loved.

On a more regular basis, I rely on The Economist, The Atlantic, The Wall Street Journal, Nature Magazine, Physics World, Scientific American, and NASA is one of my favorite apps.

Paul Hirschbiel, who was on the Board of Dell Computers, gave me the best advice when I was first a CEO. He told me graduate degrees like MBAs or JDs were a waste of time. Rather, you need a graduate degree in child psychology to succeed in business. He wasn’t being ironic either, as it was based on his own experience as Paul was a child psychologist for many years before going into business. I don’t think a lot of folks know that about him.

MTS: Something you do better than others – the secret of your success?

Enthusiasm to bring things into being.

MTS: Tag the one person whose answers to these questions you would love to read:

My sons, affectionately called “The heathens,” or my portfolio company CEOs because I’ve learned so much from them.

MTS: Thank you Lewis! That was fun and hope to see you back on MarTech Series soon.

Lewis Gersh is CEO of PebblePost, guiding corporate strategy and vision at the company with over 19 years of board and executive management experience. Prior to PebblePost, Lewis founded Metamorphic Ventures, one of the largest portfolios of companies specializing in re-targeting, e-commerce and database marketing.

Our patent pending digital-to-direct mail platform integrates segmentation, campaign management, production, analytics and optimization. PebblePost combines the power of intent data with the effectiveness of in-home to achieve far higher response, conversion rates and ROAS. PebblePost® is a venture-backed company based in NYC.

Reuters Partners with The Globe and Mail’s Sophi.io Automation Platform

Wondershare Launched the Capture the Moment Campaign for…