Why Sellers.json is a Major Leap Forward in Transparent Programmatic Advertising

On April 11, IAB Tech Lab released both sellers.json and the OpenRTB SupplyChain object for initial public comment about Programmatic Advertising. Once these are finalized and live – likely some time in June – they will be a major step forward in the programmatic industry. Alongside the recent live release of app-ads.txt, IAB Tech Lab is making a significant push to dramatically increase transparency and oversight throughout the mobile in-app ecosystem.

How Sellers.json and the OpenRTB SupplyChain Object Work Together for Programmatic Advertising

To understand from a high level what these initiatives entail and how they work in tandem with one another, let’s use an analogy. Consider this image for a moment: 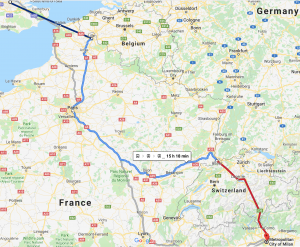 What is this? It’s clearly a map (image courtesy of Google Maps) between two points: a point of origin and a final destination. But what do those lines entail? What do the colored lines and other labels mean? To figure that out, you’d need a map key or legend to clarify the scale of the map, what various symbols represent, etc. Ultimately, you need to fully understand how to get from point A to point B, and to know what’s going on in between the two.

This isn’t the only purpose that sellers.json serves. It also works as an equivalent of app-ads.txt for non-publishers, showcasing precisely who everyone else works with and who is authorized to work with whom. This ensures that non-authorized parties are not inserting themselves into transactions.

To see precisely what both look like upon implementation, check out the IAB Tech Lab specs: https://iabtechlab.com/sellers-json/. Note, however, that it’s only out for public review now and may go through minor updates over the next couple of weeks.

Read More:How AI will Change the Game for Influencer Marketing

Why Both are Needed – and Both are Important in Programmatic Advertising

The ultimate goal of both sellers.json and the OpenRTB SupplyChain object is to increase transparency in the programmatic ecosystem. In tandem, these new specs provide all players in the supply chain with oversight on who specifically is involved in each transaction – and whether or not they should have been involved in the first place.

For the industry, these developments are sorely welcome. As issues such as brand safety and invalid traffic grab headlines, trust in the entire ecosystem erodes. By shining a bright light on every component of a transaction, fraudsters cannot easily hide anymore..

If these initiatives sound similar to app-ads.txt, that’s for a reason. Sellers.json take the whitelisting principle of ads.txt and applies it further up the chain at the supply-side platform (SSP) level. By moving beyond the publisher, the demand side gains added visibility on whether other intermediaries are involved with a particular supply source. Sellers.json becomes even more effective when a publisher has an app-ads.txt file posted, as they work together to paint a complete picture.

For example, let’s say a brand’s chosen demand-side platform (DSP) uses an ad exchange (let’s call it Exchange Supreme) with the ultimate goal of placing an ad on a particular app (let’s call them Publisher Supreme). There are many different paths that connect Exchange Supreme with Publisher Supreme. They can be connected directly or via a reseller. Since all options are on the table, how can the DSP know for sure what path was used for a particular placement instance? Without a blueprint in place for the transaction in question, the DSP and its brand partners are left in the dark – and fraudsters love to operate in the dark.

App-ads.txt is still hugely valuable by itself in preventing bundle spoofing and unauthorized reselling, but sellers.json and the OpenRTB SupplyChain object just take it one step further and provide added clarification at the SSP and at the transaction level.

The OpenRTB SupplyChain object and sellers.json are valuable for everyone in the programmatic ecosystem. For those on the buy side (brands, agencies, DSPs, etc.), these specs enable them to know exactly who is involved in transactions, and to develop a firm whitelist that keeps bad actors on the outside looking in.

On the other hand, publishers can now easily check for themselves what SSPs are claiming to hold a relationship with them (keep in mind, sellers.json is publicly accessible!).

Finally, for the SSPs, the OpenRTB SupplyChain object and sellers.json ensure that their supply is seen as trustworthy and valuable. After all, from a monetary perspective, fraud heavily hurts both publishers and SSPs, as it prevents them from seeing the full ad revenues paid out by the buy side.

As mentioned previously, both sellers.json and the OpenRTB SupplyChain object are currently in a 30-day public review period, which will end on May 10. After that, the IAB Tech Lab will take initial comments into consideration and release a final version of the specs. This will likely come in June this year.

Neither sellers.json nor the OpenRTB SupplyChain object are silver bullets, capable of stopping all fraud. But, they do significantly raise the costs of perpetuating fraud in the programmatic ecosystem, helping to dramatically reduce the incentives. This is why sellers.json and the OpenRTB SupplyChain object are such major advances, and why both should be implemented as soon as possible.

Sergio is a product manager for the SSP strategic business unit and has been at InMobi for almost five years. He manages the InMobi Exchange and most of the supply products at InMobi. Prior to InMobi, Sergio worked with different companies in the online space where he contributed to the product strategy and code base. With more than five years of experience working in ad tech, Sergio sits on the IAB Open Measurement and OpenRTB Working Groups.
Sergio holds a Bachelor’s degree in Business Management and Economics at Bocconi University in Italy, and got his master in business at HULT Business School in San Francisco. He is a tireless programmer passionate of philosophy and statistics.

Hour One Raises $20 Million Series A to Accelerate Virtual…

Cloudflare Teams Up With Open Source Community to Create New…