The Fearless Girl Campaign: She’s Fearless, but Is She Priceless? 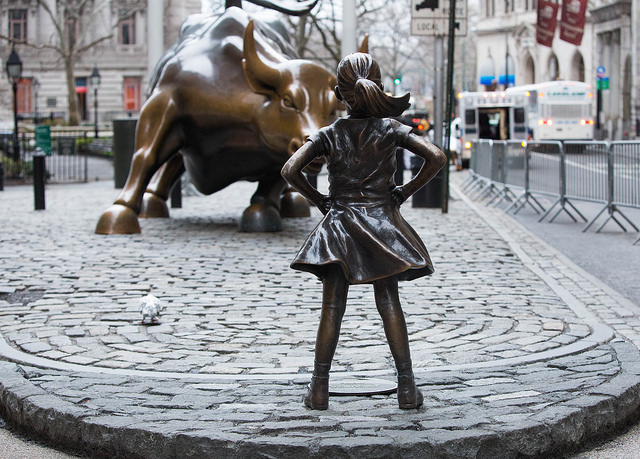 Since the unveiling of Kristen Visbal’s bronze statue on International Women’s Day, ‘Fearless Girl’ achieved viral status for all the ‘right’ reasons. In April, it was reported that her virality has a price – to the tune of USD 7.4 million in free publicity to be exact. According to Bloomberg, she earned Boston-based State Street almost 70 percent of financial services media the next day, overshadowing giant Goldman Sachs Group Inc.

What does all this hype really mean? How does one measure the value of “free” publicity? In this case, USD 7.4 million equated to–

In terms of social media advertising, it’s further broken down into spikes in social media mentions beyond the 10,000 mark on three separate occasions, and over 500,000 shares across social media networks such as Twitter, Facebook, and Instagram. While these figures sound wonderful, aren’t they all simply vanity metrics?

For those in the marketing, advertising, and PR camps, metrics often get given the more-the-merrier treatment. However, it doesn’t always make sound business sense. When we set our sights on too many vanity metrics, it’s easy to lose focus on the real data that matters. Ideally, metrics that are worth investing time, energy and money in, are those that help companies make decisions. Unfortunately, the majority of such key data can get lost in the media frenzy. As the name implies, vanity metrics give you a mood boost – it gives the illusion of succeeding, even if you’re not, simply because the numbers are growing.

Some examples of these (generally) are–

While seeing the figures for vanity metrics might make everyone feel good, they don’t actually offer clear guidance on what to do next (do we build another sculpture?).

However, that’s not to say that vanity metrics are completely pointless. For example, if your aim is to raise awareness for a brand or cause, then naturally, impressions and virality matter. In the case of “Fearless Girl,” it definitely seemed to help raise awareness for gender equity. But, if your KPI is to increase sales and revenue, the above list doesn’t really matter and would most probably annoy your stakeholders who are after more than just free advertising.

In short, what you define as a vanity metric also depends on what you define as a successful campaign. When it comes to listing KPIs for your campaigns, it’s more important and effective to focus on a few metrics that relate to your business goals and sales or marketing strategies. Of the list, sales – ROI and revenue – is probably the most common and important factor for companies, but it’s also the most challenging to measure and achieve. But placing focus on the right metrics can steer your campaign in the right direction for results.

To set your KPIs, the first obvious question is – what’s your objective? Once you have made that concrete you can move on to identifying which metrics really matter. Known as actionable metrics, these can include:

Setting a KPI for your revenue is a no-brainer, but it also involves factors like how much was spent, the ROI and which ad or channel was most effective. In this scenario, you have to wonder if the cost of commissioning the sculpture was taken into account in the calculations – this amount seems undisclosed.

These days, demographics go beyond just age, gender, and spending power. You can track which groups are your most profitable customers, versus those who are one-off buyers, and even break it down to the time of day these customers are most likely to spend.

Customers are not to be confused with visitors, or mere foot traffic i.e. people who stand around taking selfies with your statue. How many of the people who took selfies and posted on social media, then proceeded to nearby offices to open up an investment portfolio afterward?

Bringing money into the equation and talking about ROI may seem crude for those whom “Fearless Girl” has turned into an empowering, feminist symbol. However, one cannot ignore the facts –

So while it is easy to demonize the poor beast, he was really quite harmless on his own. If the facing statue had been a hunter with a gun aimed at the bull, what would the message be then?

There are many metrics that provide valuable insights. Whether or not “Fearless Girl” is a successful campaign depends on State Street’s motivations and KPIs, which we’re clearly not privy to.

An Australian entrepreneur based in Singapore, Dave has over 13 years of digital experience. He led search and insight teams at Maxus Asia Pacific and Datalicious. His expertise on digital strategy based on data-driven insights has won him and his team industry awards such as IAB Australia 2011, Asia Digital Media Awards 2011, and Magnets 2012 and 2013.

Passionate about realising the potential of data and technology to deliver better marketing, Dave feels it’s not enough to just build technology that automates data analytics reporting the way humans do it. The new generation of technology has to do a significantly better job and truly deliver a step change in insight quality.

He believes the combination of artificial intelligence, data science, scalable engineering and visual design can create enough value for marketers to break old habits and realise the gains of analytics at scale – faster, more frequent analysis of marketing data.

For the Consumer’s Sake: CMOs Must Unleash the Power of Marketing Technology

The State of Affiliate Marketing By Oliver Roup, CEO of VigLink

How Transferable Skills Can Help Future-Proof Your Marketing, Sales and Overall…