Ways To Optimize Your Facebook Ads Cost During COVID-19 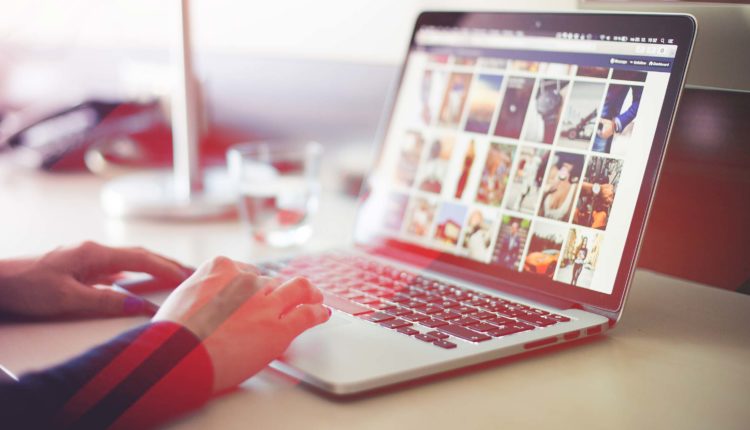 Share
Advertising trends in today’s world are changing at a very rapid rate. No matter you’re promoting a mobile application or a game, you have to look for a lot of factors before making a perfect strategy. A good advertising plan can not only save you a lot of money, but it can also bring a high return on investment. Thus we can say that an advertisement plan requires the same amount of effort and attention as the development process itself.

Advertising on different channels requires a deep level of understanding of each channel, the trends, estimated Cost per Conversion, and the intent of users on that platform. If we talk about Facebook, we have to understand a few crucial things before digging deep.

For the promotion of a mobile application, Facebook is one of the very best platforms that can bring high-quality app installs with minimum effort. Why so? the simple answer is “value-based auction system.” You might be familiar with the traditional auction systems in which the highest bidder wins the bid, and their advertisement starts showing at the top.

Facebook’s auction system works in a very different way from that; it’s intelligently build to see bid rates, ad quality, relevance, and estimated action rates. (the estimated action rate is an approximate value that determines if the user who is seeing the ad will actually perform an action according to the goals of the campaign).

Facebook identifies all these factors according to different parameters, such as it can get an idea of relevancy and ad quality by observing the behavior of the audience you’ve set for your ads. If people show interest in your ad and engage with it in any way, Facebook concludes that the ad is relevant for that audience and vice-versa for poor relevancy.

Do the above paragraphs mean that you can win a bid with a meager budget if you take care of other values? To find a reply to this question, we need to understand that thousands of bidders from the globe compete for an ad slot. It’s very likely that most of them also tried their best to fulfill other requirements to comply with the auction parameters. Keeping this fact in mind, we can say that you should place a bid that can at least bring you some results to gather a little data. You can use that data later to build a more profitable strategy.

Read more: Is Your Business up to the Stress Test of External Forces Beyond Your Control? #BusinessContinuity

For better optimization of your campaigns, you can use AppSimialr, which is a free app analysis and ASO tool. With this tool, you can find analytics and keywords related to your competitors. You can simply type a query and view thousands of results in your dashboard with detailed analysis. The data from these competitors can be used in finding their ad campaigns, their keywords, the number of FB engagements, and downloads they are getting. Filters are also available in the dashboard to refine the search results. 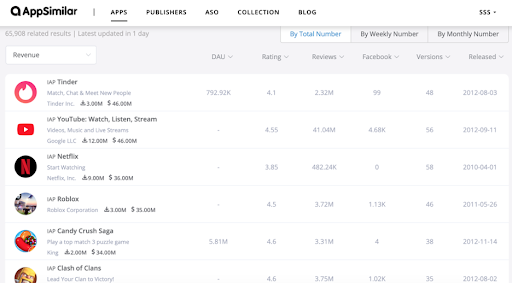 Better ad optimization means more number of installs. However, one thing that is worth mentioning here is that more number of installs doesn’t mean high revenue. High revenue is only possible if we consider the cost per install and user retention in account. ROI (Return on Investment) plays a significant role here. For instance, if we consider an application that costs around $1.5 per click, and it gets an average of five clicks to be downloaded. We can easily say that the cost per install is $1.5 x 5 = $7.5. This $7.5 is the cost per conversion.

Thus we can define the formula for conversion here as:

Cost per conversion = cost per click x No. of clicks required to make a conversion

If we can’t retain that user to our application, the entire cost for that conversion will account for the loss, which will, in turn, affect the ROI. This is where an adequately planned strategy shows its repercussions.

Read more: Using Intent Data Optimally to Manage Through COVID-19 and Beyond

Budget is one of the essential things you need to consider in order to run a successful ad campaign. You have to consider a lot of factors such as cost per click, no of clicks required to make an install happen, and the cost of that conversion.

For instance, let’s suppose that you want 1000 downloads/installs for your application, and cost per conversion (cost per installation) is $7, so the estimated budget will be around $7000.

You can use AdCostly to get an estimation of the advertisement cost. It’s a cost analysis tool that is free to use. The tool can provide you with an approximate amount of money you have to spend on your ad campaign by fetching data of CPC, CTR, CPM, and some other critical criteria. We’ve already discussed CPC. If you’re confused about CTR and CPM, here is how these two work. Click-Through Rate (CTR) is the number of clicks your links have gained in comparison to the number of total impressions.

CPM, on the other hand, is abbreviated as cost per mille. It indicates the amount of money an advertiser pays for a particular number of impressions, generally the price for 1000 impressions. 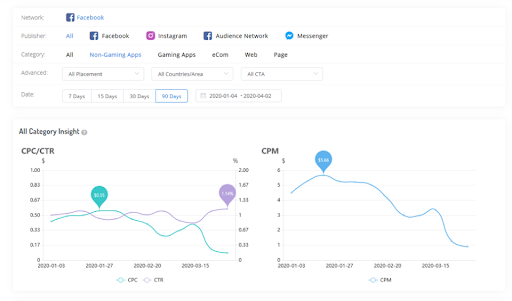 In the above screenshot, one can see that there are a lot of filters available to refine the estimated value for an ad budget. Adcostly currently supports Facebook, and it’s direct advertising channels such as Instagram, Messenger, and Audience Network. However, there are possibilities that other networks such as Google and Pinterest will be added as the tool will grow.

You can even filter based on the date, country, placement, and CTA (Call to action) type. If you look at the graphs in the above image, you can easily see the estimated value of CPC, CTR, and CPM in the case of non-gaming apps. Now coming to the Top Campaigns sections of AdCostly. 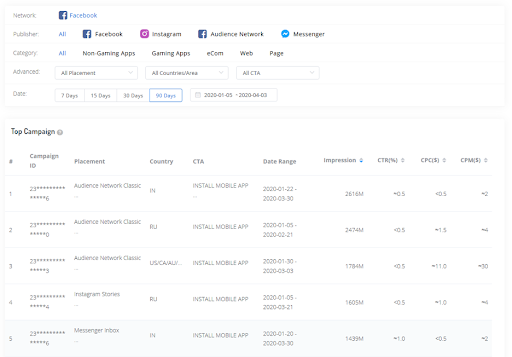 This section has the same filters, as you have seen in the main dashboard. It differs in the sense that it shows the top campaigns according to your category. The detailed reports of top campaigns can help you in getting an idea of their cost, impressions, CTR, CPC, and CPM. This is very useful in devising your strategy because you don’t need to test the things yourself, you can just have a look at these campaigns to get a glimpse of your estimated cost.

We hope that this article has helped you in understanding different factors that influence a Facebook ad’s campaign along with the strategies and tools to minimize your cost per conversion. If you’ve any more queries, please don’t hesitate to ask in the comments section.