MarTech Interview with Navdeep Saini, Co-founder and CEO at DistroScale 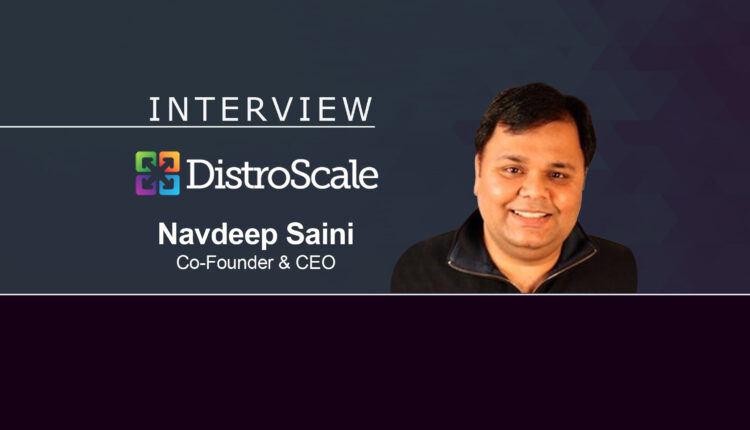 Streaming services and video technologies are evolving rapidly to meet customer expectations as the rise of video consumption becomes more commonplace, Navdeep Saini, Co-founder and CEO at DistroScale weighs in with a few thoughts:

Tell us a little about yourself Navdeep…we’d love to hear about your journey as a tech founder and the story behind DistroScale?

I studied computer science and have always had a passion for software engineering and building software-based platforms. I started in the Internet and Internet advertising industry working in the early days of DoubleClick, which is now part of Google and has become the industry standard of Internet advertising. I later went on to Yahoo! to rebuild the company’s search advertising platform and founded Buysight, which was later acquired by AOL.

Which brings me to DistroScale. I founded DistroScale with the idea to offer the industry’s most comprehensive video platform across web, apps, and connected TV. Prior to DistroScale, companies had to leverage multiple third-party solutions to assemble a video offering that they wished to deliver and monetize, whether that be on a website or app. There were a lot of touchpoints and fees involved. Through DistroScale, we are now able to offer one platform to help media brands and companies seamlessly program, deliver, monetize, and analyze video content. We bridge the technical and human elements to do for video what cloud computing did for data centers. This applies to streaming and delivering video on websites and apps.

How have you seen media technologies and media measurements (key metrics / etc.) change or be reevaluated during the last few years and especially now during this ongoing pandemic?

When we look at how media technologies and measurement is evolving, particularly during the pandemic, it’s important to note one key factor: consumer behavior. Since the onset of the pandemic, the advertising industry has been experiencing seismic shifts in consumer behaviors and attitudes. No vertical has been left untouched. It is imperative and no longer an option to consistently and frequently tap the pulse of your target audience to optimize ad effectiveness.

This is where the future of TV measurement comes into play. Streaming went from a possibility to a reality. The surgence in the streaming TV market offers a great opportunity for today’s marketers and advertisers to engage more with the medium. When we think about the traditional TV market and what ad measurement has looked like to date, it’s estimate- and sample-based. Streaming advertising is based on actuals; it is inherently more trackable and accurate. As measurement standards continue to evolve across the industry, it is my belief and hope that streaming TV advertising measurement only continues to become more robust and intuitive. Platforms for streaming advertising are already evolving to track that ads were played and viewed.

What according to you should brands be doing to take more advantage of the streaming market today?

2020 saw an incredible increase in streaming viewers, with major platforms — Netflix, Amazon Prime Video, Hulu, and Disney+ all experiencing staggering subscription growth since February of last year. In fact, data shows that more than 25% of consumers added at least one streaming service during the pandemic.

Given these growth figures, when we think about what brands should be doing today to take more advantage of the streaming market, the answer is simple. Now is the time to act FAST. FAST services have ample opportunity to work with media brands to build new, linear streaming channels that provide their target audiences with content that will resonate. The options are so vast that today, even the pickiest of viewers should be able to lean back, tune in, and find the content channel that piques their unique passions and interests.

This, in turn, signals a massive whitespace for advertisers to take better advantage of the streaming market. The streaming TV market’s fast adoption rates and improvements in real-time, dynamic ad insertion allow advertisers to tap into the viral wave and ride it. This allows advertisers to hitch their efforts onto a piece of trending content and effectively spread their message algonside it, at a scale and capacity previously unheard of in the TV market. Streaming TV advertising allows more granular control on when and where to serve relevant advertisements.

What are some top predictions you have for the future of media technologies?

It roots back to audience engagement. Every day, media technologies are evolving to become more intuitive. When we look at streaming TV services, they are smart. They put the viewer in direct control of the content they choose to watch. They aim to learn preferences and adapt accordingly to viewer behaviors. This means that when a viewer logs into a streaming service to watch a certain show or movie, it is an intentional act. They are interested and invested, and therefore, they are more likely to sit through the advertisements and really absorb the content presented to them on the screen. This, in turn, leads to more effective and meaningful brand engagement through ad campaigns. The future is FAST; the future is smart.

With that, there is also an opportunity to take streaming TV to previously unseen levels of interactivity. We’re already starting to see it happen in select markets, like viewers actively communicating with one another during live streaming esport events. Perhaps we will see this taken a step further; for instance, custom channel packages for individual viewers based on watch habits.

Tell us about some of the upcoming plans at DistroScale, what can users look forward to?

DistroScale recently reached an important milestone with DistroTV. The FAST streaming service just hit its 150-channel milestone, marked its emergence as the largest, independent FAST on the market. Since its launch in 2019, DistroTV has seen rapid growth concerning its breadth of content and global audience figures. In the last six months, viewership quadrupled and total watch time multiplied eight times over.

DistroTV has built a strong programming lineup of popular film and television channels, including Reelz, Law&Crime, Qello Concerts by Stingray, Magellan TV, People TV, and TD Ameritrade, among others. Additional independent channels include some of the following: Kweli TV, which spotlights the rich history and global diversity of the Black community; Canela TV, featuring Spanish programming; Latido Music, the leading channel for Latin music; BritAsia Live for people of Indian culture around the globe; Venus TV, which features popular Bollywood movies, culture, and more. The future will see continued expansion and offer new and engaging channels to the platform’s growing global audience.

A few takeaways for marketing leaders in 2021: top factors they should keep in mind as they plan for the rest of the year?

We are in the midst of a period of mass disruption and growth. Agility is key. With consumer behaviors and sentiments shifting at such a rapid scale, streaming TV needs to adapt and evolve at the same pace. The market is booming, but it will need to stay innovative. In turn, media brands must take advantage of the virality of the streaming TV wave, and ride it. Streaming TV quickly emerged as an incredible tool to help brands get their content in front of interested, dialed-in viewers at mass scale who are likely to connect and resonate with the brand. With that, it’s imperative to consistently be gathering, identifying, and analyzing shifts in consumer sentiment for advertising efforts to remain authentic and effective.

Navdeep Saini is co-founder & CEO at DistroScale, a leading media technology company with the industry’s most comprehensive video platform across web, apps, and connected TV. DistroScale is the parent company to DistroTV, the nation’s largest, independent FAST network, which is now home to 150 live streaming channels.