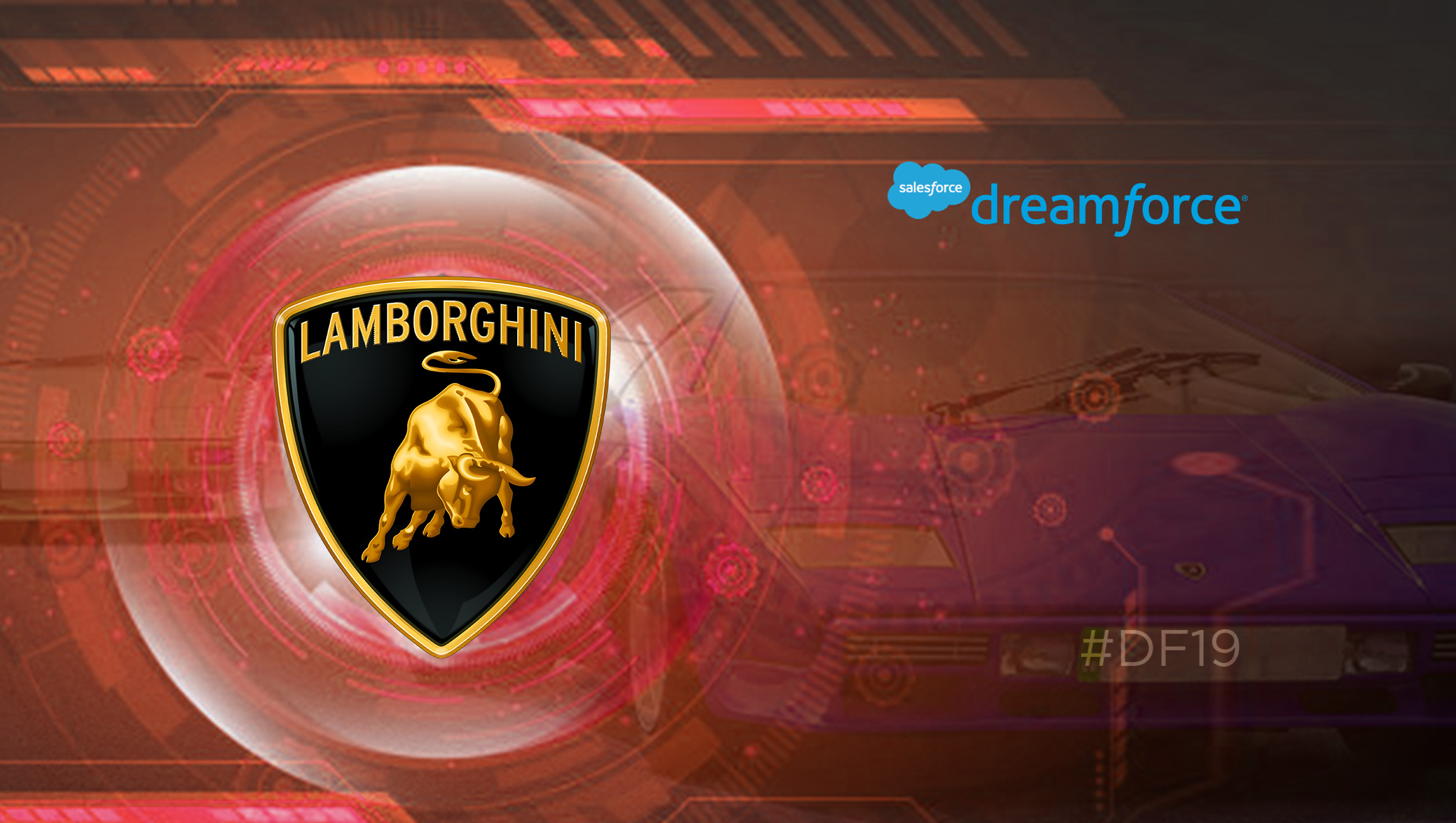 Within months of its launch, Salesforce Blockchain platform has already earned the trust of customers. In the latest Dreamforce update from SF, the Italian brand and manufacturer of super sports cars and super SUVs – Automobili Lamborghini announced how it uses Salesforce Blockchain to trace, certify and authenticate heritage cars faster and more securely than ever before.

What is Salesforce Blockchain?

In May, Salesforce had announced Blockchain CRM that allows customers to deploy a complex network of Blockchain-powered CRM workflows, contacts, apps and commerce in a code-free environment.

This new Marketing Technology is developed in partnership with the open-source Blockchain technology provider, Hyperledger. The MarTech leader confirmed that Trailblazers from the Arizona State University, IQVIA, and S&P Global Ratings are already using the Salesforce Blockchain CRM platform.

Known as a top-end luxury brand, Italian car maker Lamborghini has been shattering the benchmarks in the automotive market since its founding in 1963. Its readiness and agility in deploying and quickly transforming operations using innovative technologies is unprecedented. By leveraging Salesforce Blockchain, the car maker has again shown the industry how innovative techniques and collaboration with top Marketing platforms can increase the customer experience and maintain the value of its heritage vehicles.

With 160 dealerships today throughout the world, in half a century Automobili Lamborghini has created a continuous series of dream cars, including the 350 GT, Miura, Espada, Countach, Diablo, Murciélago, as well as limited editions including the Reventón, Sesto Elemento, Veneno, and the Centenario.

At the time of this announcement, Paolo Gabrielli, Head of After-Sales at Automobili Lamborghini –

“Innovation has been at the core of our company since its founding,” said Paolo Gabrielli, Head of After Sales at Automobili Lamborghini. “Salesforce Blockchain will allow us to take our innovation a step further, accelerating the authenticity of our heritage vehicles faster than ever.”

The Lamborghini Revolution with Salesforce

In the official press released from Dreamforce 2019, Salesforce provided insights into this unique user-case scenario.

“When a Lamborghini is resold, the vehicle often goes through 800 to 1,000 certification checks that take place at the Lamborghini headquarters in Sant’Agata Bolognese, Italy. Conducting these thorough inspections require Lamborghini technicians to work with a massive network of resources—photographers, auction houses, dealerships, repair shops, newspapers, magazines, and other media sources—to curate the full history and most importantly verify all of the parts and service of each unique vehicle. This grueling process led Lamborghini to leverage Salesforce Blockchain to create a trust network between these distributed partners—enabling Lamborghini to authenticate each heritage vehicle faster and more securely than ever before.”

Safety, Security, and Trust – The Pillars of Salesforce Blockchain

Lamborghini is charting new territories and avenues in CX for heritage cars using Salesforce Blockchain. The car maker is digitizing its authentication process by creating a trusted network among technicians, repair shops, dealerships and more.

Salesforce is also helping the Sant’Agata Bolognese-based “bull” in extending the value of Lamborghini’s luxury heritage cars even further, each vehicle will come with an immutable record of service, including restoration, prior ownership and more. Additionally, because all authentication checks are managed by Lamborghini and its trusted partner network, each car is armed against potential counterfeiting—ensuring these exotic vehicles become even more valuable throughout their lifespan.

“Blockchain is changing the way companies approach trust and transparency. Lamborghini is a perfect example of this—we’re excited to see how such an iconic brand is able to innovate and transform the vintage car market with a cutting-edge technology like Salesforce Blockchain.”

The V10 Huracán family, successor to the iconic Gallardo, made its world debut in 2014 with the Coupé version, followed by the Spyder and the Rear-Wheel-Drive versions as well as the Performante in 2017 and the Performante Spyder in 2018, proves their driving capabilities holding several lap records. In 2019 the new Huracán EVO (Coupe and Spyder) has been introduced, featuring a next generation V10 engine and incorporating next-generation vehicle dynamic control and aerodynamics.

The Aventador S Coupé and Roadster presented in 2017 represent a new benchmark in the world of V12 luxury super sports cars. And the Aventador SVJ, presented in August 2018, has already claimed its position as the Nürburgring-Nordschleife production car record holder, completing the 20.6 km lap in just 6:44.97 minutes.

Today, Salesforce is the global leader in Customer Relationship Management (CRM), bringing companies closer to their customers in the digital age. Founded in 1999, Salesforce enables companies of every size and industry to take advantage of powerful technologies—Cloud, Mobile, Social, Internet Of Things, Artificial Intelligence, Voice, and Blockchain—to create a 360-degree view of their customers.

PropellerAds Announces the Inauguration of a New Office in…