Ad Council Announces David Sable, Global CEO of Y&R, as the Board Chair

David Sable succeeds Margo Georgiadis, CEO of Mattel, and former President, Google, Inc as the Board Chair of The Ad Council

David Sable, the Global Chief Executive Officer of advertising agency Y&R, has been named Chair of the Ad Council’s Board of Directors. Sable succeeds Margo Georgiadis, CEO of Mattel, and former President, Google, Inc. The Ad Council board is comprised of a prestigious group of senior executives from media companies, agencies (advertising, PR, digital and social), technology companies and advertisers. In his role as Chair of the Board, Sable will chair the Ad Council’s 2017 Annual Public Service Award Dinner, the largest fundraising event for the organization held each fall.

Lisa Sherman, President and CEO of the Ad Council, said, “David Sable’s expertise in the advertising industry and integrated communications is unparalleled and his dedication for giving back has been unwavering. David and Y&R have been long-time supporters of the Ad Council, lending extraordinary talent and time to many critical issues facing our country. We’re thrilled he is taking this leadership role on our Board.” Sable joined the Ad Council Board of Directors in 2011 and became a member of the Executive Committee in 2013.

Recommended Read: Cannes’ Festival of Creativity is the Cradle of MarTech and AdTech Innovation

David Sable is Among the Top 10 Most ‘Generous Marketing Geniuses’

Throughout his longstanding tenure at Y&R, Sable led the agency’s pro bono support of several Ad Council campaigns including Digital Literacy, Ebola Aid Awareness, Financial Literacy and the most recent iteration of UNCF’s (United Negro College Fund’s) iconic A Mind Is A Terrible Thing to Waste campaign, which over its history with Y&R has raised over $2 billion and helped graduate over 400,000 deserving minority students from college.

In 2013, Fast Company named Sable one of the 10 Most ‘Generous Marketing Geniuses,’ and this position will continue that legacy. In addition to serving on the U.S. Fund for UNICEF’s National Board, Sable was the founding chair of their NY Board. He also serves on NY’s Volunteer State Office of National and Community Service Commission, as well as the Cultural Advisory Committee. Additionally, Sable provides his leadership on the boards of UNCF and the Christopher Reeve Foundation and he is deeply involved with the Special Olympics.

David Sable said, “This is a singular and spectacular honor. Throughout my career in the industry, the parallel thread and passion for me has been my involvement in the non-profit world. I believe everyone has the capacity to help change the world. The Ad Council plays an extraordinary role in our industry — the organized social conscience of our industry — and it has made a huge and tangible difference to the lives of so many people, across so many sectors of American society. We all know the power of advertising to not only change minds but also behavior. Its power is exponential in driving social change on so many critical issues we face. I am ready to begin, and will enlist the help of our industry at every level to further its cause.” 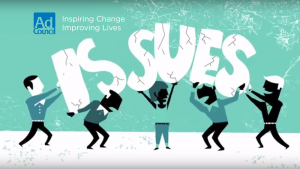 Among his many contributions to the advertising industry, Sable has been the Director-at-Large of the 4As, and Jury President and Jury member of several Cannes Lions Creativity Festivals. Sable’s advertising career began at Y&R, after which he worked at Wells Rich Greene and then co-founded Mimsar, an advertising agency in Israel.

Sable then moved to Burson-Marsteller and Cohn & Wolfe, before returning to Y&R in 1990 to lead the international portion of the Colgate-Palmolive account. While there, he also helped win Y&R’s U.S. Postal Service’s consolidated account, before leaving to pioneer an omnichannel startup, Genesis Direct. In 2000, he moved to Wunderman, where he spent 10 years ultimately as its Vice Chairman, before returning again to Y&R.

With the election of Sable, the Ad Council will continue its ongoing tradition of rotating Board Chairs every year between the organizations’ founding sectors: media companies, agencies, and corporate advertisers. Linda Boff, Chief Marketing Officer at GE, will succeed Sable as Board Chair in July 2018. The Ad Council brings together the most creative minds in advertising and media to address the most worthy causes. Its innovative, pro bono social good campaigns raise awareness. They inspire action. They save lives.

80% of Social Media users in Asia who follow Influencers are…