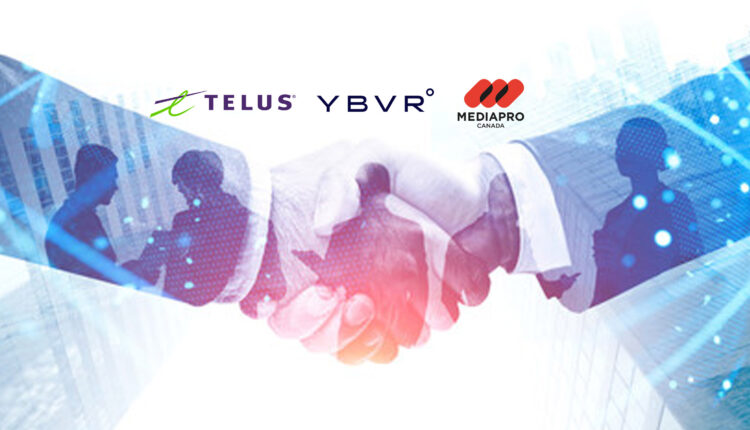 YBVR, a Silicon Valley technology startup and a global leader in Immersive Live Sports streaming, has joined forces with TELUS and MEDIAPRO Canada to pilot a fully-immersive Sports Metaverse service in Canada and redefine the way fans experience live sports. Beginning with OneSoccer and the Canadian Premier League (CPL), the TELUS Sports app brings Canadian soccer fans access to unique features allowing them to choose, in real time, between up to eight different camera angles, across multiple devices and from multiple viewers to offer the most immersive soccer viewing experience in the comfort of their home or on-the-go. TELUS Sports is free and available for download on mobile devices through the Apple App Store and Google Play Store, select Android TVs for TELUS subscribers on Optik TV and Pik TV, and web browsers by visiting telussports.ybvr.com.

“YBVR is proud to partner with TELUS and MEDIAPRO Canada to offer a one-of-a-kind viewing experience to Canadian soccer fans,” said Hector Prieto, Co-Founder and CEO at YBVR. “YBVR is the technology provider behind the enhanced, immersive, multi-camera and hyper-personalized fan experience. It is an interactive and flexible solution that will be available for all October Canadian Premier League games. As soccer fever takes over Canada, the ending of this year’s season promises to be exciting, and TELUS, combined with the power of YBVR’s technology, will make it accessible for all Canadians.”

YBVR’s current portfolio of immersive sports tech initiatives includes projects with Wimbledon and the Australia Open tennis Majors, EuroLeague basketball, and Real Madrid, as well as partnerships with major players in sports broadcasting such as Verizon, Singtel, and Telefónica.

“As the sport with the highest participation levels among children and young people in Canada, soccer is embedded in our national mainstream. This project provides an exciting boost for fans by enhancing the Canadian Premier League’s digital content offering through the TELUS Sports app,” said Amit Nag, Vice-president, Entertainment and Education Services at TELUS. “By partnering together with YBVR and MEDIAPRO Canada, TELUS is piloting next-generation technology for the Canadian Premier League and enhancing soccer’s impact on the Canadian landscape.”

The new partnership is among the first to ride the wave of technological innovation into Canada, bringing immersive, personalized and interactive functionalities to soccer. The combined technological capabilities and experience of these three world-leading companies will bring a trailblazing new option to Canadian Premier League fans through the TELUS Sports app and OneSoccer.

“This new venture represents an extraordinary opportunity for OneSoccer and the Canadian Premier League and will vault the viewing experience to a whole new level,” said Oscar López, Chief Executive Officer at MEDIAPRO Canada. “In just four years, the CPL has developed into a compelling and competitive league with a dedicated fan base from coast to coast, and TELUS and YBVR have shown that they understand the popularity of soccer among Canadian families and sports fans, at a time when Canadian soccer is reaching new heights – not just at home but at a continental and global level. We’re delighted to join the likes of Real Madrid and Wimbledon in engaging viewers through the latest in technological innovation.”

The TELUS Sports app is available as a pilot for fans to watch the remaining nine matches in the season, for a total of four regular season matches and the five post-season fixtures which will determine the 2022 CPL champion.

VIZIO Ads Closes Upfront with $200M+ In Commitments from Agencies, Brands and Studios

Validity Expands the Partner Experience to Support Growth of…

Influence Mobile Announced as the 121 Fastest-Growing…