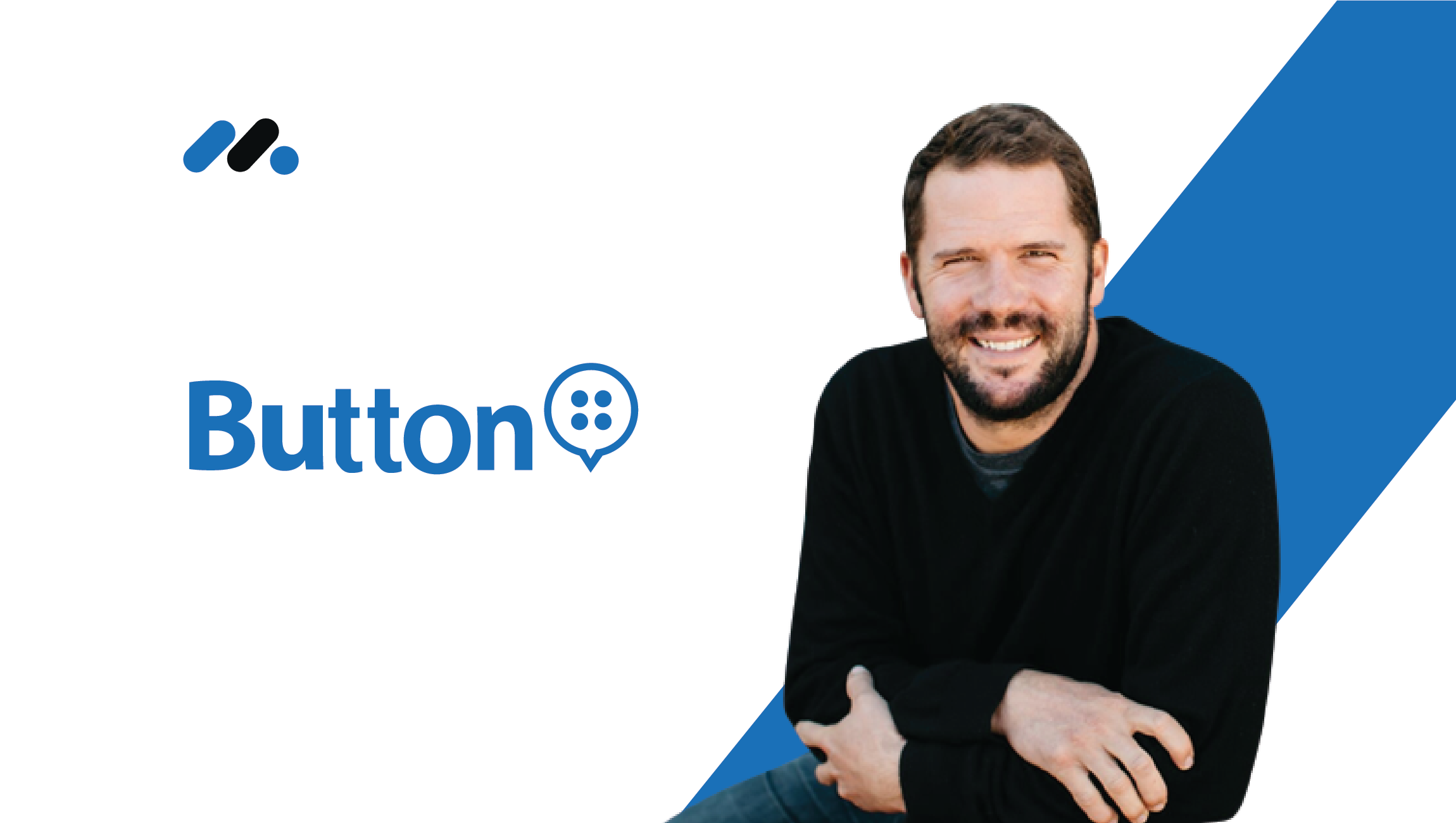 MTS: Tell us a little bit about your role and how you got here? What inspired you to start a martech company?
Prior to starting Button, I had the opportunity to work under one of the world’s most successful entrepreneurs, Hiroshi Mikitani – or Mickey as his friends call him. In that position, I was able to learn from a leader who had built his company from a few people in a small room to one of the world’s largest internet companies.  Following Rakuten’s acquisition of a startup that I was helping run in Boston, I was able to gain insights into the global economy and witness firsthand how mobile was changing everything across the digital landscape.

In my capacity at Rakuten, I was helping lead some of their investment strategy – looking at all types of businesses and investing in some (we led a $100 Million investment in Pinterest back in 2012), and what stuck out to me most was the explosion in growth and speed of the mobile economy. That growth wasn’t being driven by Apple or Google – but by companies that were inventing new marketplaces based on the trends and behaviors mobile was introducing – an always-on connection, payment credentials loaded persistently, and a vibrant economy of new services that satisfied daily needs. Watching these trends emerge, I had confidence that a company like Button needed to exist – a platform designed to make connecting to these amazing new services easier for businesses big and small.

More technically, when viewing there was a lack of consistent linking protocol that allowed businesses to partner, collaborate, and share in the joint success. I knew that businesses needed this – and frankly, as a consumer – I wanted it, too! The ease of hopping in an Uber from a mapping app, or booking a table through a local app, or booking a hotel from a flight app – all these connections gave users what they want – while providing businesses a powerful new revenue stream.

That’s where the idea of “buttons” came to mind. Conceptually, I loved the concept of giving users what they want, when they want it, with the touch of a single button. With brands placing more and more emphasis on mobile, I felt like our timing was right. Fast forward to today, and we’re 45 people and are powering connections on behalf of some of the world’s most respected brands. And, although we have a lot left to prove, I’m proud to say we’ve introduced a model to one of the fastest growing economies that looks like it’s here to stay.

MTS: Given the massive proliferation of marketing technology, how do you see the martech market evolving over the next few years?
I think the general trend is that mobile is changing how brands and marketers think about their spend. For the first time in history, spending can be truly “quantifiable”. Whether it is using a platform like Button to drive commerce and commissions, or Ibotta to verify and attribute offline spending, or Pinterest to measure retail purchases from social – the device and all of the associated data and sensors and location access provide marketers the opportunity to be smarter about the dollars they spend.

As Chase showed earlier this year with reducing the number of sites they showed ads on from 400,000 to 5,000 properties with no dip in performance, I think mobile will only further that evolution in thought and strategy. We think that content must match the commerce or ads you’re trying to drive to, and I think the greatest areas of growth will be centered on this very theme, giving consumers a better experience: more of what they want, and recalibrating around models that enable the consumer to win. Because, in mobile – as consumers have shown us – that’s more important than any other area of focus.

MTS: What do you see as the single most important technology trend or development that’s going to impact us?
In the marketing tech world, I still think that mobile is a tremendously underserved category.

As the gap between time and money spent on mobile continues to close, I believe we’ll see transactional revenue streams emerge as more and more important than the traditional advertising models we’ve been used to. I think the natural progression is for advertisers to move to a more CPA-oriented mindset, as this typically yields the highest measurable ROI for brands.

If you want to look at the breakdown of channels in desktop and try to compare those to mobile, you’ll quickly recognize that the most significant gap in mobile today is the performance marketing category. Over time, we believe this will actually surpass the 20% seen in desktop because of the transactional nature of the mobile device. There is a marketing mix that exists in desktop that will be fully replicated in mobile.

If you break that down it looks like this:

MTS: What’s the biggest challenge that CMOs need to tackle to make marketing technology work?
As companies increasingly focus on their digital and mobile strategies, engineering talent is becoming inundated. CMOs will need to find solutions that are scalable and capable of being managed beyond engineering teams past the initial integration.

MTS: What startups are you watching/keen on right now?
Startups:
I love the businesses that are smartly solving problems with user interest in mind.

Big Companies:
I don’t know if you could consider Criteo a startup, but I’ve always marveled at their speed and execution.

Slice, which Rakuten bought, is one of the smartest models I’ve seen – and one of the few businesses in that category that truly scaled.

MTS: Could you tell us about a standout digital campaign?
One merchant we’ve worked with on multiple global partnerships is Groupon, integrating the app into the recently launched Hotels.com Mobile Concierge, leading loyalty app Ibotta, local discovery platform Foursquare, The Weather Channel, among others. In only six months, Button’s platform has driven millions of dollars through our marketplace to Groupon. We’ve become a popular channel used by Groupon for driving mobile acquisition and a go-to path for mobile partnerships.

MTS: One word that best describes how you work.
Thoughtfully

MTS: What apps/software/tools can’t you live without?
There are quite a few, and I’m probably going to miss a few here. To rattle off some top-of-mind: Uber for getting anywhere, United for flying me places, Viber for communicating, Amazon for basically anything, my iPad for reading, and the iRing you’ll find on the back of my phone to save me from dropping it.

MTS: What are you currently reading?
Shoe Dog

MTS: What’s the best advice you’ve ever received?
Outwork everyone in the room, and you’ll win.  – Mike Bloomberg

MTS: Something you do better than others – the secret of your success?
Trying to feel what others feel.

MTS: Tag the one person whose answers to these questions you would love to read:
Hiroshi Mikitani

MTS: Thank you, Michael! That was fun and hope to see you back on MarTech Series soon.

Also Read: Attribution has always been a challenge given the sales data is held by the retailers: Jonathan Opdyke, President, Brand Solutions, Criteo

Button is the premiere mobile partnership platform for the world’s leading brands, providing a scalable solution and the simplest way to build partnerships that drive commerce. Through proprietary technology and hands-on service, Button facilitates discovery and transaction among consumers with a user-first experience. Current partners on the platform feature industry leaders such as Hotels.com, Condé Nast, eBay, Groupon, Uber, Foursquare, Booking.com, and more.

The company was founded in 2014 and was voted as a top 50 Best Workplace in the U.S. by Inc. Magazine and a Best Place to Work in New York by Fortune in 2017. In 2015, Button also took the top spot as the #1 Best Place to Work in NYC by Crain’s. Button has raised more than $34 million in Seed, Series A, and Series B funding from Norwest Venture Partners, Redpoint Ventures, Greycroft Partners, DCM Ventures, Accomplice Ventures, VaynerRSE and others.

Breaking Down the Data Silo: How Social Media Data Has Crossed Department Lines to Provide Insight Throughout an Organization

MarTech Interview with Claudia Johnson, Vice-President of Capability Acceleration at…

ThreatX Named in 2022 Magic Quadrant for Cloud Web App and…

VMware Named a Leader in the 2022 Gartner Magic Quadrant for…

Bluesky Aims to Save Snowflake Users Millions by Optimizing…