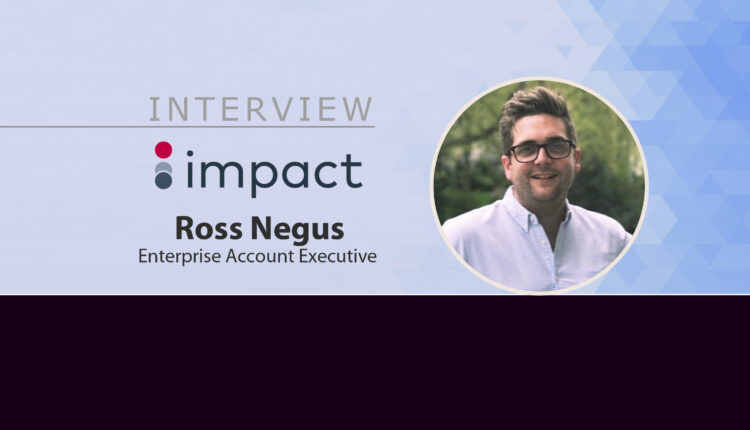 When Impact raised $150m in a funding round earlier this year, the global partnership management platform attained coveted unicorn status as a privately held start-up valued at more than $1bn.

Founded in California in 2008, Impact launched in Europe just six years ago. Its first European salesperson, enterprise account executive Ross Negus, talks about early struggles, tipping points and why the journey feels like it is only just beginning for partnerships.

Where did Impact stand when you first joined?

When I first started, in August 2015, the platform was relatively unknown, particularly in Europe. They were at about 75 employees globally, but only four in Europe including me, and the thing that made me join is that we had just signed Uber and Airbnb. I thought, for a small company that signs massive brands in the US, there could be a good opportunity in Europe. But I came in very naive, I had no idea. We thought we had a really good story with the US success but the reality was that British brands didn’t really care about what US brands were doing. That was the naivety from my side – expecting this easy ripple of what happened over there.

Was it a hard sell, to persuade UK brands to in-house their affiliate programmes and run them through your platform?

It was really hard, to be quite frank, for the first two or three years. The problem was the maturity of affiliate programmes in the UK was a little bit behind the US. In the UK, they weren’t there – there wasn’t the maturity of brands, they were pretty small teams, whereas in the US they had large teams, large resources, and in-housing was much easier. We also didn’t have the partner reach. There’s two migrations – one is the brand getting integrated, the second requires all their partners getting integrated. And our competitor Partnerize had been in the market since 2012, and they already had all their partners integrated, and that was very hard to sell against. But we knew we had better technology and a more innovative approach to growth through partnerships, and we soon won Getty Images and McAfee off Partnerize, which really started off our snowball effect and rapid expansion from that point on.

Did it ever feel like there was a possibility that this might be something that didn’t work globally?

No, it is 100% a global platform, and it always had that. A lot of what Florian [Gramshammer, Impact managing director, EMEA] brought when he arrived in 2018 was to talk about the unbundling of technology from strategic services. The reality is, every partner has to be tracked, has to be measured, has to be paid. That’s the core function of the technology. But it makes much more sense for you as a brand to own those relationships directly and not have a middle person in between. You still need in-market expertise, local touchpoints – no one business can own that globally – but you can have technology that’s global. That’s where evolution happened. Brands own their partnerships directly – track, measure, pay through us – and recruit partners locally, based on what they need and when and leveraging automation to provide a much more scaled and efficient route to partner acquisition. The partners are there in the market, along with any strategic agency services that can be applied on top of those, but the technology doesn’t change.

When did things start to turn outside the US?

The massive turning moment was March 12 2019. That is when we raised $75m funding and announced this new model and sector of growth for enterprises that we called partnership automation. We had come in there to disrupt affiliate marketing, giving brands a platform to manage those relationships directly. But March 12 is when we really pivoted to say, no, actually, affiliates are just one type of partnership. We’re now building partnership automation, where we take this affiliate model of paying on performance and apply it to any unique referral partner – influencers or B2B or anyone else. The maturity of the market came together and it really, really skyrocketed from there.

Things like Google and iOS 14.5 and the blocking of cookies and so forth, it’s this perfect storm of advertising and retargeting – you just can’t do it anymore. About 90% of marketing dollars are going into a funnel of Google and Facebook, and it’s hard to track and all the other problems of that duopoly, and CMOs know that. So Impact is doing really well, advertising is dead because of declining consumer trust, the demise of third-party cookies and the impact of walled gardens on data transparency – all these elements started coming together.

And the conversations you are having with brands now are easier than at the start, or are they also with different kinds of people?

Well, both. For example, I have not been able to speak to one particular very big company for five years. Over the years we’ve tried affiliate managers, partnership managers, acquisitions, and recently we went straight to the CMO with the subject line ‘Advertising is dead’. He forwarded it to the omnichannel media director and we had a call the next day. And he said, ‘everything you have said makes complete sense. We are seeing this, we have these problems and we don’t know where we are going in terms of spend.’ So we have opened up the opportunity of who we can speak to and address at different companies. It’s a much broader piece now – we are educating different areas of the business.

Saying that advertising is dead now, saying that affiliate was dead five years ago – you’ve not been scared of provocative statements.

No, and that’s been great from a marketing perspective. I remember back in 2016, before we settled on partnership automation, we were still calling it partner marketing, but we definitely didn’t think affiliate was really the right term, and we fought hard. There was a massive kick-off around what we were talking about. That’s now shifted. Enterprises are maturing the role from affiliate manager to partnership manager, and broadening the depth of that role and opportunity, so it’s clearly been adopted. That’s been driven by Impact, and the nice thing is it’s also been driven by our customers. Companies like Uber and Airbnb were using our platform, working on a pay for performance model, paying on result with any type of partner, and they really expanded what partnership can mean.

That’s where you stand today – where does it all go next?

Where we are today feels like the start of a really exciting journey. Particularly with these privacy updates and the eradication of being able to track and so forth, it makes partnerships so required. But also there’s been a seismic shift in consumers, how they interact with brands. They don’t trust advertising. I’m the same, I don’t see advertising out there and click on it. I moved out to the countryside, it’s the first time we’ve had a garden and it’s the first time I bought a lawnmower, so I went to YouTube. And I bought the lawnmower I bought because three people recommended that type and they gave me an honest view of what is good and also what is bad about it – something you will never hear from a brand themselves. I’d never come across that brand before or seen their advertising. And that is a shift in consumers – that we don’t just want to be bombarded by ads from brands; we want to have these really unique, authentic customer journeys that happen between brands, partners, reviews, influencers. From Impact’s perspective, as the de facto partnership automation platform, the next ten years is really going to balloon.

Impact is transforming the way enterprises manage and optimize all types of partnerships. Their Partnership Cloud™ is an integrated end-to-end solution for managing an enterprise’s partnerships across the entire partner life cycle to activate rapid growth through the emerging Partnership Economy™.

Ross is an experienced marketing technologist and works with market leaders globally to create new performance partnerships. He has been a senior member of the commercial team at Impact EMEA for the last 5 years and in his role as Enterprise Sales Manager.  Ross works with global brands to onboard them onto the leading martech platform. Prior to joining Impact, Ross has held senior commercial roles for companies such as Funnelback, Engage PSG and InterQuest Group.