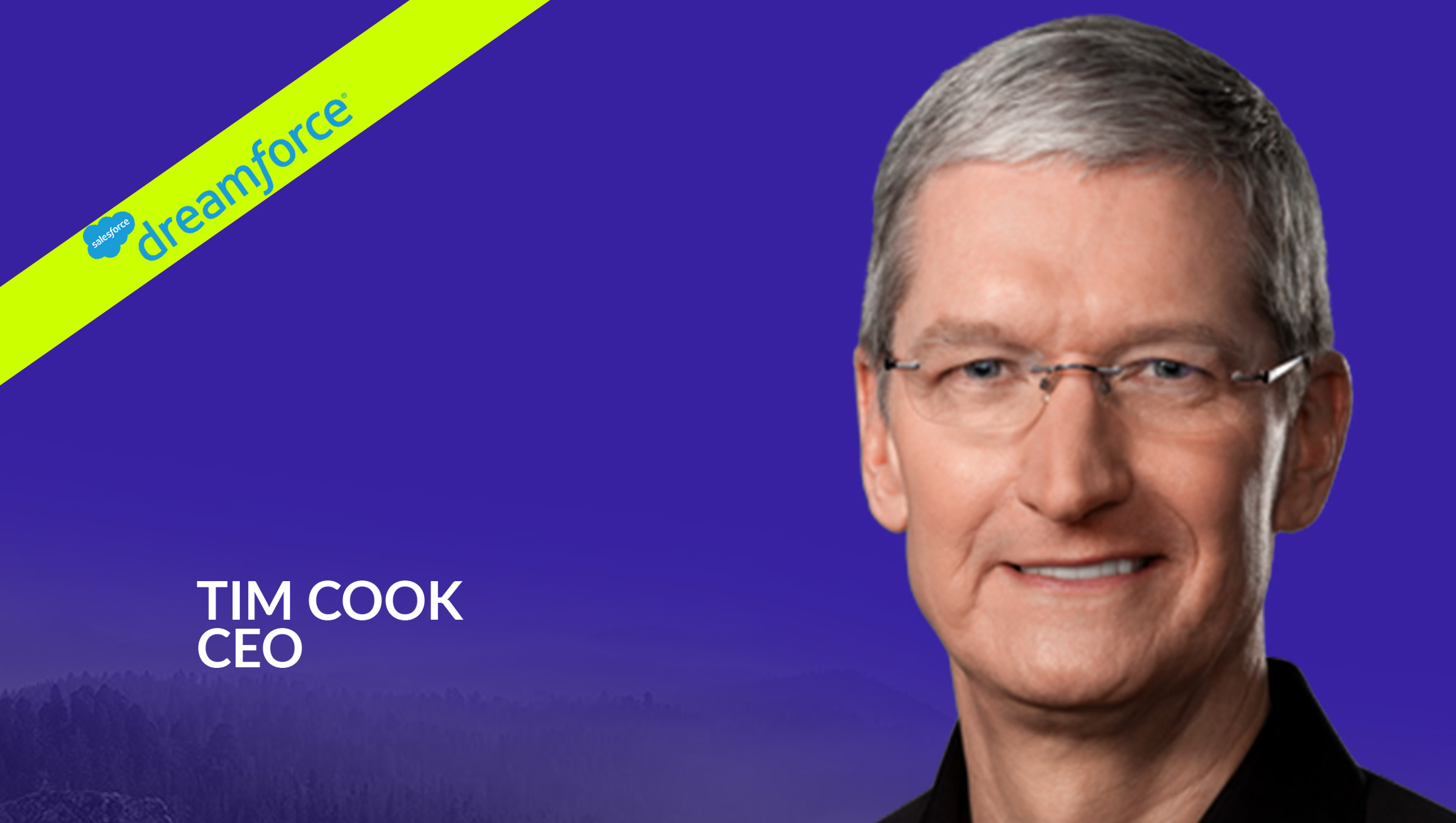 Here’s a quick snapshot of the tête-à-tête between Marc Benioff, Co-CEO of Salesforce and Tim Cook, CEO of Apple. It was a pleasure hearing Tim reveal about Apple’s growth as an Enterprise Mobile App platform and how it leverages Salesforce Cloud to ignite creativity and to drive productivity in almost every Fortune 500 company.

The Past, Present, and Future of Apple: Keep Innovating and Yet, Stay True to Values

Tim said that innovation is key to progress but it’s not enough to just innovate. Values, such as embedding privacy in all of the products, go hand-in-hand with Apple’s innovation and research centers.

As Tim puts it – Privacy is a fundamental human right and so we’ve many times looked into the mirror hard because we (Apple) wanted to be a steward on the ship of the Earth.”

Today, Apple doesn’t merely do things that are required to be done legally, but go beyond that. Apple is committed to running the company fully on renewable energy and they have achieved that already.

Apple CEO also acknowledged about working with OEMs and suppliers and help them embrace the values together.

Tim says, “We’re out working with all of our supplier partners to bring them to a hundred percent renewable energy. We’ve taken the audacious goal of only taking the recycled materials for our Products and to take nothing from the Earth… no mining, no way!!!”

Another value that Apple CEO talked at length was about equality and diversity – the signs enterprises need to show up to employees and help promote dignity and respect for all at workplaces and outside.

Operationalize Your Dreams, Not Marketing

Tim Cook’s message to every CEO, CMO, and tech leadership roles – don’t create values because they sound the right thing to do now. Do it because it’s a good thing to do for the Earth and its people.

Tim promotes the idea–“Don’t copy our products. But, you can copy our values and vision of changing the world with ripple in the pond ideas.”

Tim Cook feels that the enterprise app marketplace is still far behind the marketplace for customer apps. However, his confidence in the growth trajectory for enterprise apps built on Apple-Salesforce partnership platform is sky-high. Tim mentioned about one of the biggest customer wins for Salesforce Apple mobile app.

Mobile apps are still restricted to integrating emails and messaging platforms at an enterprise-level. The Salesforce Mobile app is now available for iOS and iPadOS. With the new Salesforce mobile app for your Apple smartphone and devices, your entire business is now mobile, conversational, and smart.

The redesigned Salesforce Mobile app brings the full power of Salesforce to your device and delivers increased speed and productivity.

Productivity is Mobile, Mobile is the Future

Move aside desktops and computers… It’s incredibly unrealistic and delusional for many when the CEOs of the world’s largest tech companies talking about computers and laptops hacking into workplace productivity. Both Marc and Tim reiterated the future belongs to Mobile and the wide array of new-generation applications available on app stores to increase productivity.

AI, Machine Learning and the Boatload of Myths in Trade

AI and Machine Learning is a great opportunity for Data Science and Technology companies to blow away the myths that have ‘sprouted’ in the industry. Tim called them false trad-offs. One such false trade-off pertains to the mining and use of consumer data by and for invading into privacy.

Apple CEO in his clear, non-cryptic message said how the company is driven to not just transform the way businesses and customers use technology, but also invent new forms of trade and business using its pillars of operationalized values.

A Tribute to Steve Jobs

The fireside chat between Marc and Tim played out at the same auditorium where Apple co-founder Steve Jobs launched many of their Apple products. Tim relived how Steve would leave his office first before Tim left. Before Steve would leave, he would stop by to exchange notes with Tim. “That’s the sign of friendship. I remember him more than once rehearsing on the stage and sort off going way off-script and, in a way that only he could do, he would make everybody laugh.”

“He wasn’t known for that, but he did that!”

Tim’s Revelation and Contemplation on his own life could be turn into a gospel for any human being. Answering to Marc Benioff’s question about the most important in life, Tim Cook answered (almost philosophically)-

“In my upper thirties, it became clear to me that we’re almost searching your whole lifetime for your purpose. I’m sure some people in the audience have done this too… and, you are almost convinced early in life about your purpose in life is this and that… but it keeps changing as you move ahead in life. Soon you realize that the purpose of life is to help somebody else. That is the sole reason that we’re here. Life gets so much simpler once you get that in your head…That’s my North Star.”

“So many complex decisions become easy when you realize that you’re here in the service of other people and not you.”

Thank you, Tim Cook and Marc Benioff for such a special showcase fireside chat.

Unlocking the Value of Programmatic Advertising