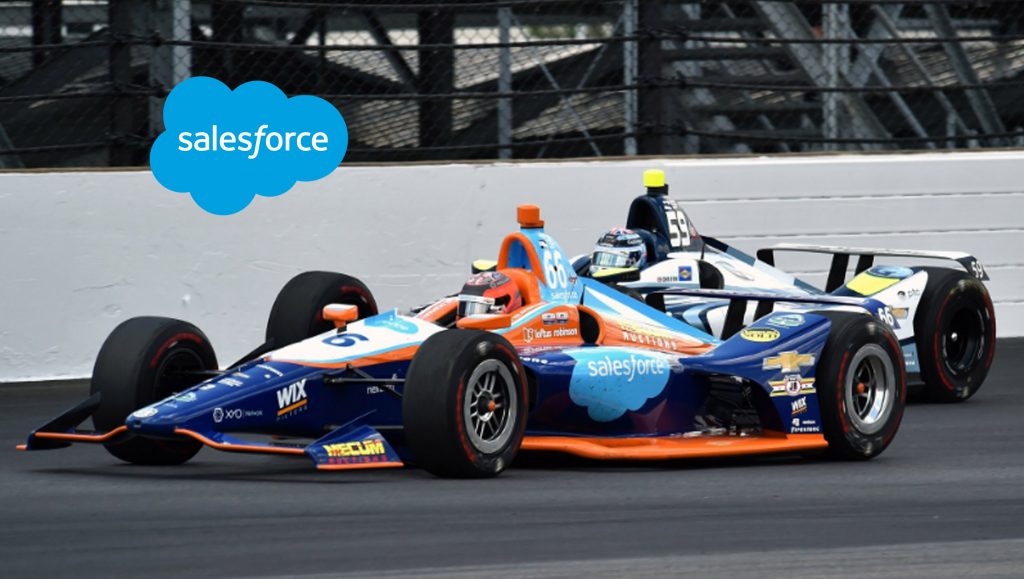 After the hustle-bustle of GDPR, the martech community had something different to cheer about. Top CRM maker and martech leader, Salesforce is burning some serious rubber in Indy 500 racing as well. Popular racer JR Hildebrand drove the Salesforce-sponsored car 66 to an eleventh-place finish in Sunday’s 102nd Indianapolis 500 race. Indianapolis is home to Salesforce’s second largest office. In a candid blog, Salesforce was ga-ga about the driver and the champion car, not forgetting to mention that how Salesforce employees cheered J.R. on at the racetrack. It was Hildebrand’s first race with Salesforce as a sponsor.

After the finish of the race, Salesforce’s CEO Marc Benioff tweeted —

Congratulations @JRHildebrand finishing #11 in @IndyCar 500! You are a @salesforce Trailblazer! pic.twitter.com/jyHj9N53fy

The fun did not end there for Salesforce followers. The company created stickers with Salesforce mascots commemorating J.R’s first Indy race with the company. Salesforce also created a replica of J.R.’s Indy car, placing it in the lobby of their iconic Salesforce West building in San Francisco.

In a recent interview with the Salesforce Newsroom, J.R. said that speed attracted him to racing at a very young age.

J.R. said, “The first time I got in a go-cart, it was just sensory overload. And that was an experience I had never felt doing anything else. I’d raced BMX bikes, and it was always kind of in my blood a little bit, I think. But once I actually got in a go cart–you’re sort of taming the beast. It’s a very primal set of feelings.”

Australian driver Will Power won the race, followed by Ed Carpenter and Scott Dixon. It was J.R.’s eighth Indy 500. He was 2011 Indianapolis 500 Rookie of the Year, following a dramatic runner-up finish in the hundredth anniversary of the race. The San Francisco Bay Area native lectures on driverless car topics to classes at Stanford University, and is an advocate for science and technology education.

Congratulations J.R. and Salesforce on a great track event!

42670
We store cookies on your computer to improve your experience and provide more personalized services, both on this website and on other sites. For more information about the cookies we use, see our Privacy Policy. We won't track your information when you visit our site. We will have to use at least one cookie to ensure that you won't have to make this choice again.AcceptPrivacy Policy