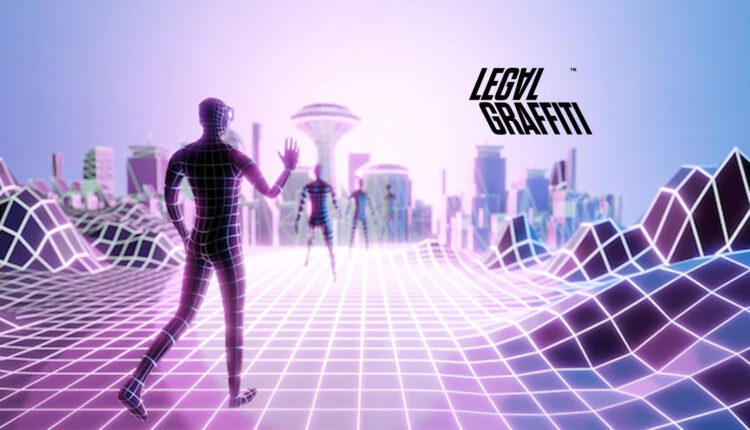 Legal Graffiti is now live on StartEngine, a funding portal registered with the SEC which brokers the raise of crowd funding and the distribution of equity to investors for startups. Founded by designer Cara Bucciferro, Legal Graffiti aims to bring culture to the masses through augmented reality and social media while creating a new creator economy for digital artists.

Early investors interested in evolving the social media landscape now have the opportunity to buy into Legal Graffiti at the ground level for a minimum purchase of $270. It is the first augmented reality social media platform that is regulated by the SEC and is currently available for use in beta on iPhone and Android. It will launch fully at the end of 2022 following the completion of this pre-seed funding round which will distribute approximately 10% of the company’s equity.

Prior to founding Legal Graffiti, Cara Bucciferro co-founded NewHive, a multimedia web publishing platform which gained over 11 million users. She lives in NYC and holds over 15 years of experience as an art director and designer elevating brands such as Microsoft, Coach, Kiehl’s, LOFT, Victoria’s Secret and more. Her personal philosophy is one of using design as a vehicle to improve the human experience and add beauty to the world. “I want to metamorphosize my experience into my ideal version of technology—one that could make people happier and more connected,” says Buccifero, who is a single mom and a survivor of stage 4 cancer.

Legal Graffiti provides a new gateway to the metaverse, AKA the digital parallel of the physical world. Inspired by Niantic’s augmented reality apps but craving something more to do with them than catch Pokèmon, Bucciferro sought to fill the intellectual hole in the AR industry by bringing art and culture to the metaverse. Building off her experience with NewHive, which facilitated the first ever sale of a URL as fine art at Art Basel, she aims to level the playing field of the digital art market by curating diverse works from around the world. The marketplace will facilitate partnerships with digital artists everywhere and enable them to mint and sell their work as NFTs.

The technology of Legal Graffiti combines augmented reality with a social media platform and a creator’s economy which allows artists to profit directly from their fans. Legal Graffiti’s beta app is currently in use by professional artists in NYC, such as Aviva Romani, Rose Desiano and Juan Hinojosa. Soon artists everywhere will be posting and viewing content all over the world. Public content is filtered and promoted by Legal Graffiti’s team of curators, while private content can be shared among a personal network.

Users can post cultural artifacts—art, photography, poetry, music, videos or anything by overlaying them on the physical spaces as they encounter them. Then they can virtually view spaces as far as their imagination will take them to see what digital artifacts others have left behind. Imagine going on a street tour through Tokyo from your living room, or finding out what’s happening in your own community from your neighbors as they walk around. Themes and feeds will enable Legal Graffiti users to follow the activity associated with topics and places they value. “Using Augmented Reality, we have built an app that allows people to not only view art as they walk around the streets, but travel the world virtually from their phone or computer,” Bucciferro says.

“I want to get people excited about watching us grow. Having them invest and be a part of the process at the ground floor is a great way to do that.” Entering an environment where only 2% of investments go to female founders, Bucciferro saw StartEngine as an alternative to the typical forms of funding which favor men, while at the same time being fully regulated by the SEC and meeting all financial standards.

Automation Anywhere and the Center for Humanitarian…