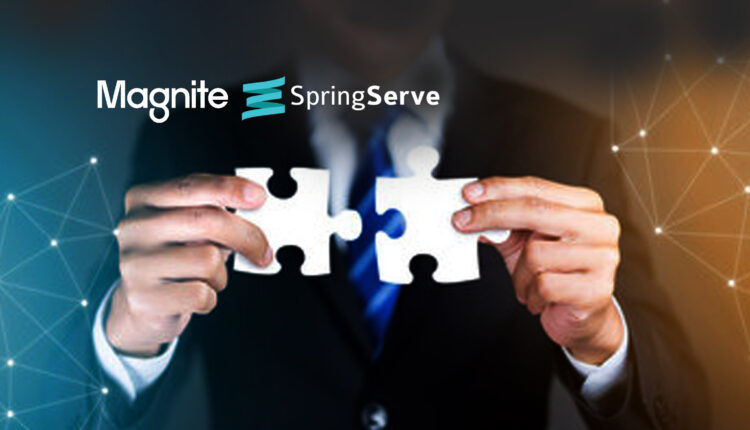 The purchase price was approximately $31 million (net of a prior $2 million investment and subject to adjustments), pursuant to a previously negotiated option agreement that Magnite secured as part of its acquisition of SpotX in April. Last year, SpotX made a minority investment in SpringServe in conjunction with a strategic partnership agreement between the two companies.

“The addition of SpringServe will better position Magnite to meet the needs of leading CTV publishers, no matter where they are in the evolution of their sales channel strategy,” said Michael Barrett, President and CEO at Magnite. “If CTV publishers want to be fully programmatic, they can leverage our CTV SSP, and if they’re in the early stages of programmatic, the SpringServe ad server will allow them to go at their own pace and customize their prioritization of direct-sold and programmatic demand. Additionally, our hybrid solution enables programmatic demand to compete with the publisher’s direct-sold demand and optimize yield automatically.”

Founded in 2015 and headquartered in New York, SpringServe was created with the goal of providing a suite of ad serving tools that make digital advertising more efficient. To ensure publishers’ holistic yield management is prioritized, SpringServe will continue to be demand-agnostic. Select SpringServe clients include: OEMs such as VIZIO and media owners such as Univision, Pluto TV, and Tastemade. SpringServe CEO Joseph Hirsch will report to Magnite’s CRO for CTV, Sean Buckley.

“We’re excited to be joining Magnite and building upon their existing CTV capabilities to better help publishers manage and monetize their advertising while accounting for all the specificities that are unique to this medium,” said Joseph Hirsch, former CEO of SpringServe, now General Manager, SpringServe for Magnite. “We look forward to collaborating with the Magnite team and their clients on product development and new features that will ultimately move the CTV advertising industry forward.”

Magnite is pleased to announce the news with the support of our clients:

“It’s great to see Magnite expand its investment in CTV solutions,” said Christo Owen, Vice President of Digital Platforms at ViacomCBS. “We’re excited to see how the addition of SpringServe will bring greater efficiencies to the industry, and greater value to CTV media owners.”

“Sinclair, NewsOn and CompulseOTT have enjoyed our partnership with both SpringServe and SpotX (now part of Magnite),” said Brian Hunt, Head of OTT/CTV Advertising Sales, Sinclair Broadcast Group. “We look forward to the continued investment by the combined company in developing solutions to monetize programmatic revenue.”

“SpringServe has built a strong technology business that brought up the quality of advertising for its customers and the CTV industry on the whole,” said Travis Hockersmith, Vice President at VIZIO’s Platform+.