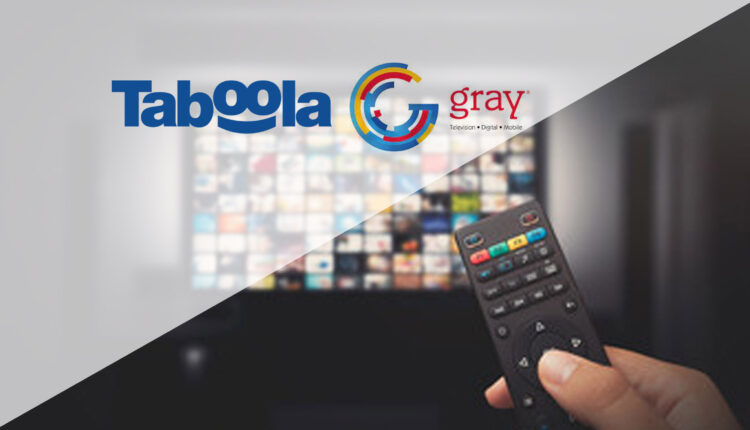 Taboola, a global leader in powering recommendations for the open web, announced a new five-year agreement with Gray Television, the largest owner of top-rated local television stations and digital assets in the United States.

Under the agreement, Gray Television will now leverage Taboola Feed across all of its digital properties, including on the Homepages of its more than 100 websites. The Taboola Feed is a seamlessly integrated feed that provides readers with personalized content, including video, for a more engaging experience. This agreement builds on a more than 9-year partnership between Taboola and Meredith Local Media, which Gray acquired on December 1, 2021.

In addition, Gray will test additional Taboola offerings including Taboola Newsroom, a technology offering that uses advanced A.I. and readership signals from more than 500 million daily active users, along with Homepage For You, a capability that helps editors power their homepages, to capture attention by leveraging Taboola’s advanced A.I. and proven recommendation platform – the same technology used by over 9,000 global publishers.

“More viewers than ever before are consuming Gray’s content daily across multiple platforms. We consider the experience of each user to be of greatest importance, and we made the switch to Taboola not only for their expansive technology offerings, but their commitment to supporting local journalism,” said Mike Braun, SVP and Chief Digital Officer at Gray Television. “We’re excited to consolidate our approach to recommendations with a trusted partner like Taboola and serve every audience member who engages with our content in a more personalized way.”

“Gray is a pioneer and leader in local news that has kept pace with the ever-changing media landscape,” said Adam Singolda, CEO at Taboola. “We are thankful for the vote of trust they have placed in us to power their recommendations, their expansion to use Taboola offerings across their entire organization, and the trust we have developed over a substantial 9-year relationship with Meredith’s television stations. We look forward to growing and innovating together.”

New Study: Professional Video is in Urgent Need of Modernization

FlashStart Welcomes MSPs Migrating From OpenDNS With a Special Offer