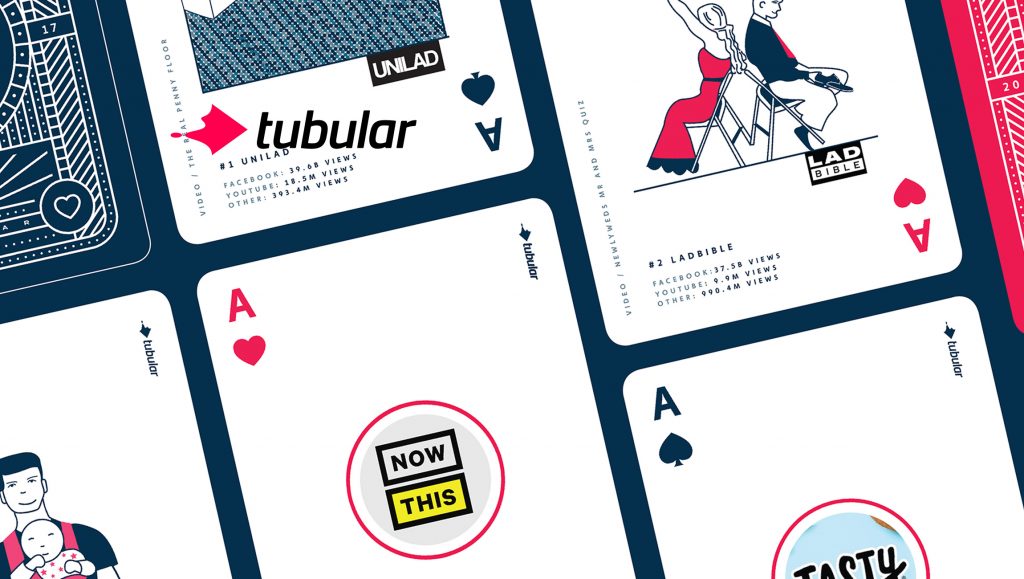 Tubular Labs, the leading global video measurement and analytics platform, announced its second annual global VideoAces Awards, honoring 2017’s top 52 media companies and creators in online video as well as the top brand partners on Facebook.  As part of the VideoAces Awards, the media company and brand partner winners will each receive a trophy. There will also be a customized deck of cards featuring illustrations of each winning creator’s most viewed video in 2017.

Recommended Read: Top Insights on the CMO’s Best Allies, Content Marketing, and the Art of Story-Telling for Brands

At the time of this announcement, Allison Stern, the Co-Founder and CMO of Tubular Labs, said,“With over 48% of consumers between the ages of 18 and 34 expected to switch their content consumption from television to social video by 2020, there’s no doubt that all content is converging to video.”

Allison added, “There were more than 10 Trillion video views in 2017. There’s a war for audience attention and the real winners are the publishers who create the most engaging and attention-grabbing content. Our VideoAces Awards recognize and applaud those winners as they charge forward creating the future of media.”

VideoAces Among the Top Most Viewed Brand Partners on Facebook

BuzzFeed’s Tasty, the largest global social food network,  took the #1 spot with 1.0 Billion views, followed by NowThis, the No. 1  social news publisher in the world, owned by Group Nine Media at #2 with 406.4 Million views. The #3 spot went to VT with 341.3 Million views followed by Bleacher Report at #4 with 305.0 Million views and UNILAD, at #5 with 303.7 Million views.

Melissa Chapman, Chief Content Officer, Jungle Creations, said, “We’re proud to be recognized in Tubular Labs’ 2017 global online video leaderboards. 2017 was a massive year for Jungle Creations. Our flagship channel, VT, grew 12 million followers and went from an average of 2 to 3.2 Billion views a month, helping us become the most viewed media company on Facebook by November 2017. 2018 is set to be even bigger as we progress towards becoming the most viewed media company in the world.”

Ashley McCollum, General Manager, Tasty, said, “We’re honored to be recognized as the #1 brand partner on Facebook in the world, and proud of the massive reach and real-world results we deliver for marketers. Advertisers who partner with Tasty know what they’re getting: unparalleled reach, best-in-class creative, and a loyal, passionate fan base who are proven to make our recipes and buy the products we support.”

Read More: How is The Location Data Landscape Shaping Up in 2018?

Ashish Patel, Chief Insights Officer, Group Nine, said, “We’ve seen incredible growth over the last year since we formed Group Nine Media — emerging as a top 10 global media company. Our data-first approach has been key to guiding the evolution of our business as well as our content creation and optimization strategy.”

Ashish added, “We’re incredibly proud that NowThis (#2 in brand partners on Facebook) and The Dodo (#8 in media and entertainment creators) are being recognized in Tubular’s 2017 VideoAces awards and look forward to additional successes in 2018.”

Currently, Tubular provides the complete picture of what short-form video consumers watch and enable companies to grow digital audiences and sell brand integrations to win in the ever-evolving world of video.

Tubular’s software tracks over 4 Billion videos, 400 Million video consumers, 10 Million influencers, 90K brands, 40K media, and 48 Billion sponsored video views. In total, that’s over 350 Million more videos analyzed per month than our closest competitor.  We know it’s not just about data, it’s about insights, and that’s why we’re trusted by 7 of the top 10 global media companies, who make strategic decisions every day based on Tubular software. Behind every digital video decision – is Tubular.

44543
We store cookies on your computer to improve your experience and provide more personalized services, both on this website and on other sites. For more information about the cookies we use, see our Privacy Policy. We won't track your information when you visit our site. We will have to use at least one cookie to ensure that you won't have to make this choice again.AcceptPrivacy Policy