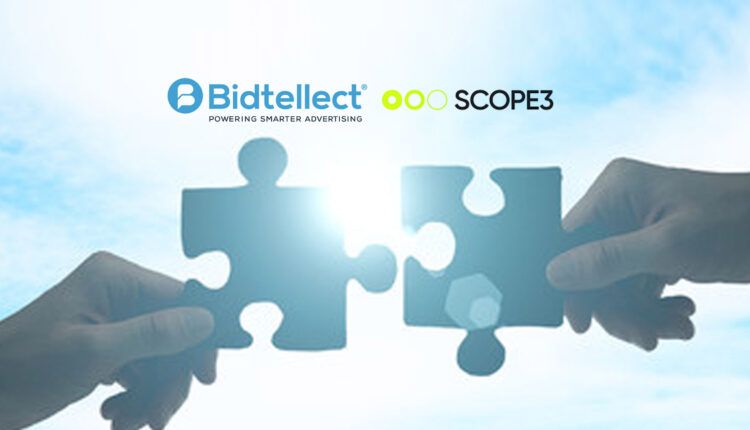 Bidtellect, a leading demand-side platform and advertising technology company, announced a first-of-its-kind integration with Scope3, the only company to report true supply chain emissions data. The integration will offer Bidtellect clients transparency into the carbon cost of their advertising campaigns and the tools to reduce their emissions directly via the Bidtellect platform.

“Digital programmatic media has always been accused – justifiably – of being far too complex, and we now know that its waste comes with a high cost to the environment. If you are an agency or a brand that values and prioritizes buying media based on its carbon footprint, Bidtellect is the only buying platform that puts actionable tools based on Scope3’s unique data in your hands today,” said Lon Otremba, CEO of Bidtellect.

Digital technologies are responsible for up to 5.9% of total greenhouse gas emissions, of which Internet advertising is a significant contributor. The energy consumption of these technologies is increasing by 9% a year (World Economic Forum).

Media waste is a major culprit. A study by ISBA and PwC found that half of online ad money is being siphoned off by the adtech ecosystem before it reaches publishers. Of that, about one-third of the money was “completely untraceable.” Eighty-eight percent of dollars could not be traced from end to end.

Scope3 brings granular visibility into the advertising supply chain by measuring the carbon emissions of every single part of the ad journey, allowing partners to seamlessly incorporate its data into their technology platforms. Bidtellect users will now have accurate insights into the carbon impact of their campaigns. More importantly, they will be able to take immediate action in the platform with ease – choosing or blocking domains, creating specific allow lists, and more – based on Scope3’s carbon data. Initial data point to a strong correlation between low carbon emission sites and higher quality of supply.

“When brands have accurate emissions measurement data available in the same place they are executing media buys, it’s a lot easier to factor carbon into optimization decisions. Bidtellect is paving the way while prioritizing action,” said Brian O’Kelley, CEO and Co-Founder of Scope3. “By offering Scope3 data directly in their platform, Bidtellect is giving buyers exactly what they need to make progress on sustainability commitments, improve advertising and proactively reduce carbon emissions.”

Forty-nine percent of executives surveyed in October by Deloitte believed sustainability efforts will have a positive impact on their brand and reputation and 76% of advertisers want the industry to further reduce carbon emissions according to eMarketer.