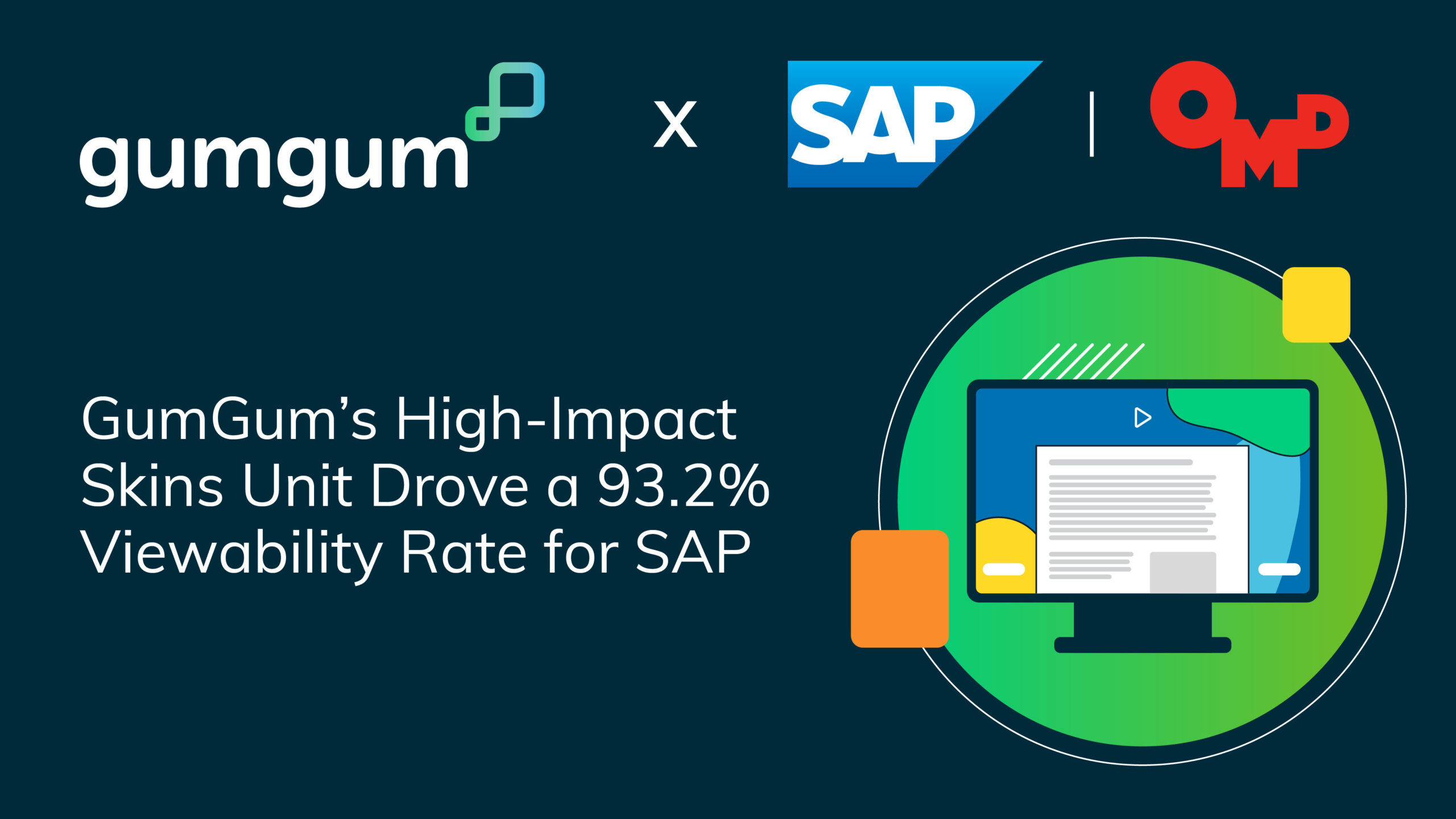 GumGum, a contextual-first global digital advertising platform, has announced that multinational software company, SAP, has become the first brand in EMEA to leverage both GumGum’s high impact desktop skin advertising unit, and its cookieless contextual targeting solution, VerityTM, to significantly boost brand awareness. Led by OMD Hamburg, a leading media agency, the campaign successfully improved brand perception of SAP as a trusted business by +7ppts, and as a company that offers the best business software and solutions by +5ppts.

Measurement was provided by research experts On Device Research (ODR) and Lumen Research Ltd. ODR measured the campaign’s impact on the SAP brand by comparing the results of two tests. The first test comprised a control sample of people who had not been exposed to the ad creative, and the second test was aimed at the target audience, with consumers shown the campaign’s ad creative. Lumen provided eye tracking technology to both measure the attention the contextual campaigns received, and help understand the broader implications of attention as a metric for the digital advertising industry.

Using VerityTM, GumGum served the desktop skin unit across its premium roster of publishers, on contextually relevant articles, targeting key business decision makers. VerityTM is able to scan everything from copy and imagery, to audio and video, for accurate and safe ad placement, without the need for cookies or any personally identifiable information (PII).

The research was a huge success in proving that GumGum’s high impact ad units – and Verity’sTM cookieless contextual intelligence technology – positively impact both brand awareness and brand consideration. 61% of the audience exposed to the campaign took some form of action. One in three felt the ad campaign was informative, while a positive shift was also seen among the target audience (+5ppts).

Peter Wallace, General Manager of EMEA at GumGum, says: “There were so many aspects about this piece of research that got us excited. The chance to work with one of the world’s leading software companies is an obvious one, but the opportunity to test VerityTM in the German market for the first time was hugely rewarding. The future of digital advertising in this cookieless, privacy-first era is all about contextual, and tapping into the consumer’s mindset at the right moment to engage and influence their imagination and behaviour. We’re delighted to have helped SAP to do that.”

Moritz Fisecker, Integrated Media Manager EMEA at SAP & Timo Steyer, Deputy Director Digital Strategy at OMD Hamburg, say: “We were looking to increase brand and product awareness – and ideally consideration – when we partnered with GumGum to help boost our advertising campaign performance. Our friends at Lumen and ODR concluded that those that saw the ads had a spiked interest in learning more, ultimately increasing brand consideration, and we’re delighted to declare our media campaign and the research results with GumGum and OMD Hamburg a success. The campaign clearly demonstrated the potential of a cookieless approach for driving improved outcomes for digital advertising.”