Safer Internet Day 2020: Is Twitter Creating a Better Internet for All? 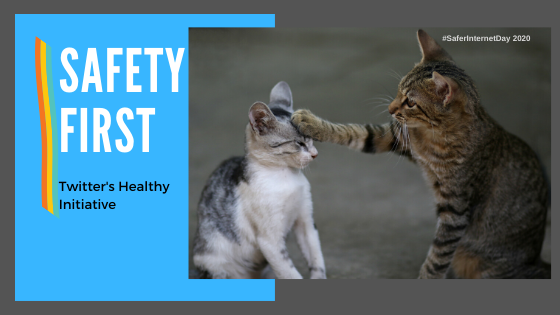 We use the internet every day, and for some, the internet is the only source of income and livelihood. For that reason, knowing how the internet works is a very important part of dealing with the current challenges and threats perceived by online users and brands. One of the greatest risks facing online users is ‘abusive content’, also rated as hate by top social media platforms, including Twitter.

Recommended: 75 Inspiring Martech Leaders Who Are Prepared For 2020

Twitter has announced that it is taking forward its “health” management initiative globally, to mark #SaferInternetDay2020. The leading social media channel will play a significant part in shaping a better internet for all.

Today, Twitter has close to 330 million Monthly Average Users (MAU) and 145 Million DAUs. In recent times, we have seen Twitter growing into a neo-political platform to spread awareness and campaigns before elections, especially in democratic countries where citizens have the ultimate power to elect their government.

According to Hootsuite, Twitter is a tricky platform when it comes to political polarization. Yes, US-based Twitter users make the most use of the social media platform to consume the latest news and information about their state, country and the world. You are most likely an educated user in the age-group of 35-60 years, using Twitter for more hours daily than on any other social media platform.

Also Read: US Has Strongest Government and Industry Protections for Children Online in First-ever Global Child Online Safety Index, According to DQ Institute

It’s true that all social media and messaging platforms, including Facebook, Instagram, YouTube, WhatsApp, TikTok, and Tinder have been heavily criticized by users for not taking bold steps to curb hateful content and to regulate political vendetta. Twitter, which has a significantly smaller user base compared to Facebook and YouTube, too suffered in user volume and reputation due to the mass-purge and bot-generated abuses.

However, over the past 12 months, Twitter has made substantial strides in tackling abusive content. Some of these include:

Leveraging technology such as AI, NLP and Online Image Recognition techniques to identify and analyze abusive content, reported by its organic “screening’ and by the users.

According to Twitter, “More than 1 in 2 of Tweets we take action on for abuse are now proactively surfaced using technology, rather than relying on reports to Twitter – this compares to 1 in 5 tweets in 2018.”

Twitter has also confirmed that there has been a mammoth rise in the number of locked or suspended Twitter handles. The company reports a 105% increase in locked-down accounts reported for violating the Twitter Rules.

In addition to tech-driven content search and analysis, and subsequent deactivation, Twitter has also provided users with unique features to manage their Tweet activities. These include ‘Hide Replies’ — now anyone can choose to hide replies to their Tweets.

Twitter’s Product Development and improvement teams are actively collaborating with experts and cybersecurity companies to make the internet safer. These are diversified via Twitter’s Trust and Safety Council.

As part of the #SaferInternetDay 2020 announcement, Twitter provided a sneak-peek into its upcoming safe-search initiative. From 5 March, deceptive, abusive and fake news tweets would be auto-labeled to safeguard users.

We use technology to detect Tweets that may break our rules, so we can review them faster and you won’t have to report them.

But if you see something before we do, please report it. pic.twitter.com/SCXmZZpVbV

In a blog, Katy Minshall states, “Labels will link to a Twitter moment to provide additional context from reputable sources on the content in question. Making Twitter safer is not a job we can do alone — which is why it’s so important to us, to participate in #SaferInternetDay2020. Across the world today and throughout February, we are working with our network of safety partners to amplify their guidance, provide Ads for Good grants to support their campaigns, and collaborating on what we can all do (to) create a better Internet.

Be a Part of The Safer Internet Drive in 2020

Twitter has announced a worldwide campaign to make the internet safer.

A safety workshop for high school students from #ICANHELP (@icanhelp).

A safety training for the Mechanism for the Protection of Human Rights Defenders and Journalists.

Addressing e-Raksha: Cybercrime Against Children with the CyberPeace Foundation and UNICEF.

A training camp at the Helsinki Central Library Oodi; participating in Better Internet for Kids meeting with the European Commission in Brussels.

Organizing an event to promote a safer internet with the partner – Webwise, at Twitter’s  Dublin HQ.

To support #SaferInternetDay, here are a few ways to control your own experience on Twitter.

For words or topics you don’t want to see, go to Settings and mute them. pic.twitter.com/xFuze36JA7