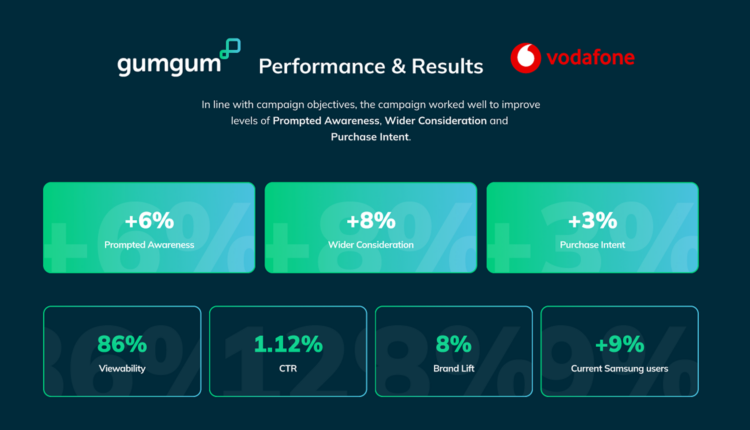 As part of this successful partnership, GumGum set out to test the efficacy of Desktop Skins, utilising its contextual tech engine, VerityTM. This was executed with global media agency, Dentsu, and research giant, On Device Research (ODR), with the teams setting out to measure the impact of this eye-catching ad format.

In order to establish the impact of a campaign on any given brand, ODR analyses the difference between the results for a control sample – users who have not been exposed to the creative; and the target audience – users who saw the ad.

The campaign also led to a significant improvement in already strong levels of awareness for Vodafone, with a 6% lift overall, and current Samsung users up 9%.

What’s more, the campaign saw an 8% lift in perceptions that Vodafone offers great deals for the latest phones, alongside an impressive 86% viewability rate and an overall campaign CTR of 1.12%.

Peter Wallace, General Manager of EMEA at GumGum, says: “The future of digital advertising will be about tapping into people’s active mindset and the team at Vodafone well understands the need for relevance and context. We were delighted to work together in partnership to capture attention in this way, and to have our approach validated once again. We have long known that contextual intelligence is the key to success in a busy online world – and that digital marketing efforts can triumph without the use of cookies and personal information. We look forward to helping more leading brands to ensure optimal relevance and creativity.”

Richard Kanolik, Head of Programmatic at Vodafone adds: “Our busy online world calls for maximum creativity and communications which are contextually relevant and engaging. We were delighted with the results of this industry-leading partnership – one which proves once again that, despite increasing ‘noise’ online, consumers respond to impactful ads delivered at the right time and in the right environment. It allowed us to exceed all our objectives; boosting awareness of the increasingly popular Samsung Galaxy Z Flip3.”

Ahana Awarded Many Industry Recognitions and Accolades for…

Squaretalk and IT Flow Join Together to Speed Technology…