The time spent on video and chat messaging platforms is rising. Lockdown has further fueled the growth in mobile-based digital interactions. Tech giants are in a ballistic race to acquire and test new-age capabilities in delivering interactive content for seamless experiences.

Vlogging platforms like YouTube and Instagram have given us a fair share of celebrity moments already. But, with new AR VR technologies readily available to general masses, we should expect in the rapid spurt of neo-celebrity and influencer marketing models.

Social media and private messaging platforms have become an emerging talent acquisition marketplace. Singers, artists, tutors, gaming buffs, tech geeks, and home-made chefs– all have lined up to give their fair feedback on what it really means to be using next-gen crunch technologies to reach their audience, and promote their talent in special fields.

The outgoing week has been a fascinating one for all the followers of interactive content technology. According to the various industry sources, two behemoths in mobile interactions have announced the acquisition of two startups. It involves speculations of Apple buying NextVR, and the other involves animated GIF-software company Giphy’s sell-out to Facebook. Both are highly interactive platforms and are aiming to disrupt the next phase of mobile messaging and interactive content management.

First, Apple, which was speculated to be acquiring a Virtual Reality company last month, finally snapped the lid off the secret. The company Apple is acquiring is immersive content builder NextVR. NextVR’s website now flashes a banner stating “NextVR is heading in a new direction.”

NextVR has been in the business of delivering immersive content for a decade now. 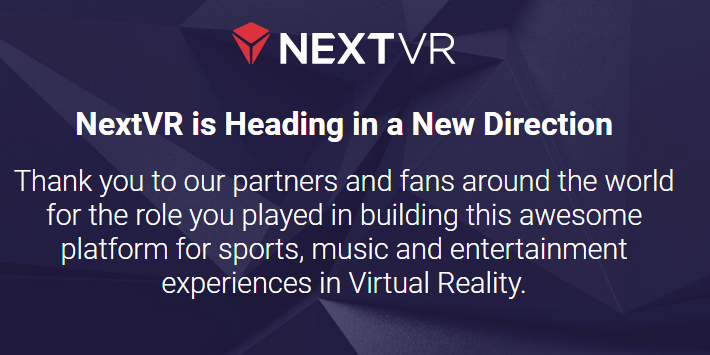 Founded in 2009, this Newport Beach-based VR broadcasting company has 26 patents listed as either granted or pending. Most of these are in categories of VR transmission, quality resolution and virtual event management. Apple, a leader in quality mobile technology, already sees the future of the mobile economy lies in taking the lead in AR VR gaming experiences!

With events moving to virtual space, and Google, Zoom and others freeing up their subscription to access free video-conferencing tools, Apple could have the upper hand in the next phase of interactive meetings and events.

Facebook is bringing home GIPHY as a teaser to spook all SMS and social media messaging platforms. During COVID-19, the volume of social media interactions has doubled down by 450%. With lockdown in place, general non-commercial use on social media is globally exploding to 2.3 GB per hour, even as Big Data companies are eyeing animated social media and SMS templates to keep users engaged to their platforms. Facebook, which owns the top three messaging apps – Messenger, WhatsApp and Instagram, expects GIPHY’s animated GIF-building software would add value to the world’s largest social media technology company.

Earlier, gaming company Niantic acquired a 3D-based mapping and AR software company 6D.ai. The team behind Poekmon Go is expected to be building AR-based mobile gaming platforms with 6D.ai, even as the company partnered with AT&T and Simon in 2019 to integrate real-world activations to Augmented Reality. Across retail locations in the US, UK, and ANZ, Niantic has been offering Harry Potter: Wizards Unite as an AR-based gaming arcade.

Niantic announced 6D.ai’s acquisition. The company confirmed they would be building a “dynamic, 3D map of the world” to create planet-scale AR experiences.

Marketing Technology News: If You Want to Survive, Build an ROI-Focused Sales and Marketing Team Now

(If you have a story to share with us, please write to sghosh@martechseries-67ee47.ingress-bonde.easywp.com)

2021 Visual Trends Report From Depositphotos With Insights from International…