The European Digital Advertising Market Continues on Its Growth Trajectory

This July, IAB Europe published the latest edition of its AdEx Benchmark report, which provides facts and figures about the health of the region’s Digital Advertising market in 2018. Since 2008, the study has mapped a trend of sustained double-digit growth. However, as 2018 got underway it was far from certain this trend would continue.

Indeed, for the first half of the year, the market showed all the signs of a slowdown. At that point, based on local market signals, we were forecasting that total growth for the year would be 12% on an annual basis – somewhat lower than had been achieved in 2017. This dip in activity in part relates to the introduction of the EU’s General Data Protection Regulation (GDPR), which came into force on the 15th of May. Uncertainty over how GDPR would play out meant that media buyers temporarily put the budget on hold while they took stock of the situation.

The market bounces back

This period of uncertainty is unsurprising and as you would expect in the context of such a game-changing regulation. What was unexpected, however, is just how quickly the market rebounded. The final figures for 2018 show that the Digital Advertising industry in Europe grew by 13.9% – the fastest growth rate the sector has experienced since 2011. Significantly, growth is reflected across all European markets; suggesting that Europe represents a common advertising market fuelled by similar growth drivers.

In financial terms, the European advertising market grew from €48.4 billion in 2017 to €55.1 billion last year. This increase suggests continued demand for Digital Advertising and at least partial adaptation to regulatory challenges. However, we expect that the full impact of GDPR won’t be realized until this year or next.

Overall, despite fundamental structural changes in the market over the past years, growth has been consistent since 2011 – varying only by a maximum of 2.4 percentage points. The growth drivers were the ‘usual suspects’: video, mobile, social, and programmatic. However, while in 2017 the market was flat once social was factored out, growth excluding social picked up in 2018. This suggests that amidst flat and declining parts of the industry, there are new pockets of growth.

We expect growth to remain double-digit in 2019, but to slow down slightly to approximately 11% year-on-year. Sources of growth are diversifying as digital out-of-home becomes connected to the programmatic ecosystem and audio achieves scale through standardization, partnerships and an explosion in monetizable inventory. However, this growth is coming from a low base. It will take another five years before it can make a significant contribution to the overall spend.

In programmatic, a renewed focus on private marketplaces by media buyers highlights a growing realization that audience-based buying still needs context. This presents an opportunity for premium editorial environments. We also see a new generation of programmatic services built on top of the available infrastructure. Services like supply path optimization (SPO) provide new tools to spot inefficiencies and optimize the supply path, and dynamic creative solutions will deliver new use cases for a programmatic infrastructure. 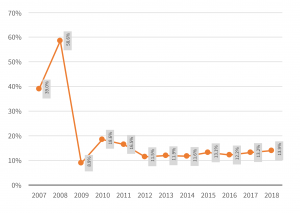 Blurring boundaries between AdTech and MarTech enable new ways of activating companies’ customer base and first-party data. Today, organizations are increasingly looking to embrace metrics and KPIs that are outcome-oriented, and they increasingly want to move beyond proxy metrics for campaign success and measure media investment as close to business metrics as possible. The marriage of AdTech and MarTech provides a path for this.

At the same time, a new sense of ‘data realism’ is developing among some of the savviest brands. These organizations understand that data can’t solve everything and not all that can be measured and quantified matters. These brands eschew short-term metrics and the performance notion of advertising in favor of creative or design-led approaches. For some, this entails moving emphasis from paid media to experience design, such as app development, customer care, logistics, and other consumer-centric features.

Connected TV also has potential, and it continues to be a hot topic. However, the landscape is much more localized and fragmented in Europe than in the US, where a lot of the growth narrative comes from. More standardization and collaboration between market participants is required if it is to live up to its full promise.

Consumer Trust: The Secret to Email Success for Publishers & Advertisers