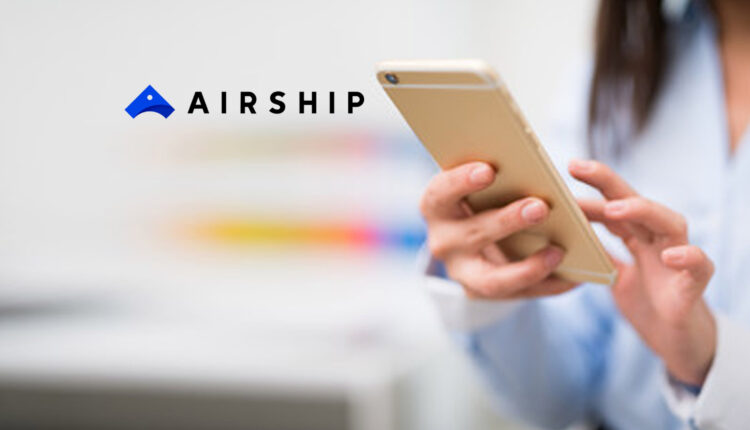 Airship published its Mobile App Experience Gap Survey report, which spotlights key internal challenges companies of all sizes face in deploying and improving mobile app experiences for their customers. Findings show that app teams at companies with 1,000 employees or more underperform in optimizing customer experiences across the entire app lifecycle due to internal processes and priorities.

Survey results show that mobile app experience (MAX) – as a concept and set of best practices – is still very much a frontier. Many companies struggle to marshal resources and apply agile methods to generate greater value from mobile apps, while others see 3.5X more revenue and 3X greater purchase frequency from customers with the app. The survey identified gaps between technical (developers) and non-technical (marketing) teams with respect to their level of maturity in optimizing mobile app experiences across seven key operational areas:

Enterprise companies have the most room for improvement

Developers and marketers in companies with more than 1,000 employees cited the most room for improvement in app store optimization (ASO). A decade of data across organic and paid search in the app stores shows that even the most well-known brand can generate up to 50% of its organic traffic by optimizing for non-branded keywords. Overall, 89% of developers cited “good” or “great” capabilities, either monitoring visibility and conversion rates in the app stores “regularly” or “daily.” Likewise, two-thirds of marketers run ASO experiments monthly, including 27% that do so weekly. However, 20% of developers at enterprise companies admitted they could do better, and 41% of enterprise marketers experiment quarterly or less often — far greater percentages than at smaller companies.

Once an app is downloaded, marketers and mobile product owners are under increasing pressure to make new relationships blossom, especially as paid user acquisition campaigns become less targeted. While most developers say it takes “multiple weeks” to build and deploy a preference center (53%) or a multi-screen feature tutorial or opt-in flow (52%), a third of enterprise developers estimated “a month” or “multiple months” or admitted they don’t have these experiences.

Once mobile app experiences are deployed, there’s a stark gap between app assessment and app improvement. Nearly two-thirds (64%) of respondents assess and adapt multi-screen feature tutorials and opt-in flows at least monthly. However, more than a third of companies only improve these critical onboarding experiences quarterly or less often, jumping to nearly half of enterprise companies. Likewise, almost one-quarter of enterprise marketers and developers were either not sure when they had last updated their app’s preference center or said it had been 1-2 years or longer.

The good news: a decade-plus of apps has improved relationships across diverse teams

For apps to be successful, a customer must find it, download it, value it enough to keep using it, and ultimately self-identify. It takes a village spanning technical and non-technical roles to make that happen. The roles speak different languages, while being dependent on one another to close the gaps between so-so performance and mobile app excellence.

Half of developers (51%) said they work very well with marketing and mobile products owners, with another 37% of developers saying marketers are “decent partners.” Marketers were even more positive about relationships with developers: 62% said they work very well together, and 29% said they are decent partners. Overall, only 12% of developers and 9% of marketers characterized their relationships as “contentious discussions,” though that skewed much higher at the smallest and largest companies. Not a single respondent chose the two most negative characterizations — “difficult” and “uncooperative.”

With nearly three-quarters of marketers and mobile product owners thinking about app enhancements each and every week, and 48 out of 50 relying on developer resources to make improvements happen, it’s a wonder that developers get to focus on job #1 — major new features and QA testing. Twice as many marketers as developers at enterprise and mid-market companies believe their onboarding, adoption, opt-in and data collection enhancement requests are handled “immediately, with the next app update.” In contrast, twice as many developers at enterprise and mid-market companies say these requests take “a month” or “multiple months.”

“Customers today need to be served personally and in their exact moments, which, practically by definition, is happening more in mobile apps than anywhere else,” said Brett Caine, CEO and president, Airship. “The business value of app-centric experiences is self-evident as you see it reinforced every quarter in earnings reports. Yet, despite those game-changing results, many companies struggle to maximize value. App teams and capabilities remain siloed, stuck in a web-era limbo of dependency and promotional approaches that fail to rise to the new customer experience expectation. At Airship, we’re aiming to change all of that with no-code methods that empower the entire team to easily create, automate and adapt native app experiences on the fly in order to capture and sustain more value.”