LEWK has successfully closed its seed & private sale rounds, receiving the support of leading VCs and acquiring notable partners. LEWK’s team, investors, and partners are excited in anticipation of the alpha launch of the platform. 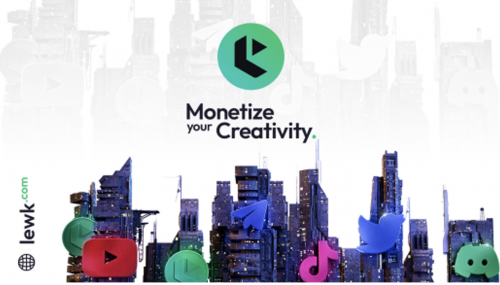 LEWK, a blockchain-powered, SocialFi content monetization platform, has closed its seed and private funding rounds valued at $3,26 million. The Seed round was completed in three hours, and the Private round commenced, seeing the participation of 16 venture capitalists. Successful completion of the first two funding rounds is propelling the company into the next stage of its development.

With a total supply of 1 billion tokens, the fully diluted valuation of LEWK is now $36 million.

LEWK, The future of Creator Economy and SocialFi.

Founded by a team of well-established experts in blockchain, social media, and fintech, LEWK is a platform that enhances the creators’ abilities to monetize their content without the need to leave their social media platform of choice. LEWK aims to act as a one-stop-shop for brands, publishers, creators, and fans, offering features that boost user experience on existing social media platforms and unprecedented incentives.

“We’re thrilled to continue in our journey building LEWK and eager to bring our project to fruition, expanding and improving the experience of millions of creators, publishers, and fans, as well as creating something completely new. Many entrepreneurs tried to combine the best aspects of blockchain and traditional social media platforms. Still, while they offered great tech, the level of complexity of these solutions led to little to no interest from creators and their fans. Our focus is to bridge this and other gaps and provide usable solutions without forcing anyone to make a switch.

Despite completing the financing rounds, we still receive investment offers that are 10x times more than our initial goal.” said Abdalla Khafagy, also known as Abdu, Founder of LEWK.

On its mission of revolutionizing content monetization and bringing creators, publishers, and fans together in innovative ways, LEWK’s foundations lay on firm ground, thanks to the support of advisors, investors, and partners. The team is finalizing the details of the upcoming public sale rounds with partners and all involved parties. LEWK’s public sale is expected to go live in March 2022.

Juniper Networks Appoints Steve Fernandez to Board of…