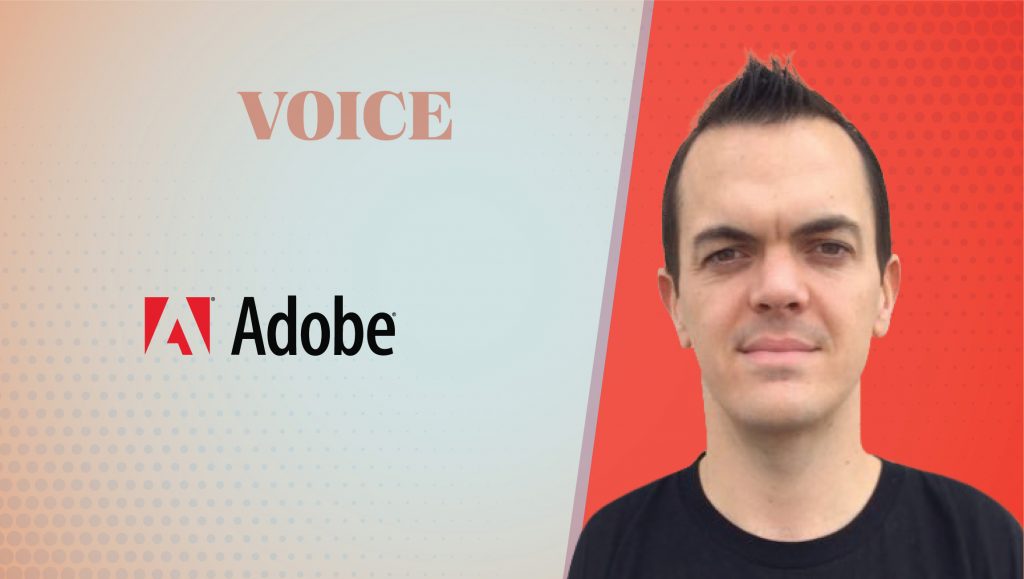 Tell us about your role and the team/technology you handle at Adobe XD.

As Director of Product at Adobe, I lead the team building voice integration capabilities for the UX design platform Adobe XD. I also drive Product strategy for emerging technologies within XD. We’re building a UX design tool that will address the needs of designers not only today but in the future, so my role is focused on identifying emerging technologies that will be critical to UX design and figuring out how we introduce them to XD.

Why has the focus shifted from mobile-onscreen experiences to voice interactions?

Globally, voice adoption is growing as many users find the medium easier and more accessible than a traditional screen. For example, asking a smart speaker to play your favorite song is often easier than finding that song on a playlist on your phone yourself.

But there isn’t necessarily a linear shift from screen to voice interactions; The focus has not necessarily shifted from mobile but actually grown to include voice. Voice will become a part of every digital experience, often combining voice and screen. Adobe recently conducted a survey of Voice technology users and found that while most people agree voice interactions save them time and improve their quality of life, they would use the medium more if it included visual elements. With voice integration in Adobe XD, the focus isn’t on replacing screens, but on integrating new forms of interaction to improve all digital experiences.

What’s the biggest challenge companies face in driving adoption of their Voice technology?

More than half of the Voice technology users we surveyed reported that the process was nonintuitive – and that’s a big challenge for brands striving to create engaging and enjoyable experiences with voice. People naturally gravitate toward voice as a great way to save time and complete tasks hands-free, but they’re not using it for more complex activities, like banking or booking travel. As companies seek to drive greater adoption, UX designers will play perhaps the most critical role in making these voice-enabled experiences something people want to use.

How is voice changing the paradigm of customer experience?

Voice presents multiple opportunities to engage customers on a new level. People are interacting with voice in different ways and at different times than they are with screen-first experiences. For example, users are likely to turn to voice while driving, watching TV or playing music, or while handling chores in the house.

To capitalize on this opportunity, brands must ensure they’re delivering voice experiences that are well-designed, on-brand, and most importantly – useful to the end-user. Brands looking to incorporate voice into their customer experience should think: what benefit or added value can I offer to the customer with voice that I can’t through another medium? We’re already seeing a ton of creative and exciting voice-first activations from brands, and I’m looking forward to seeing how space continues to evolve.

How is Voice impacting the overall strategy for branding and retail operations?

Adobe recently found that 91 percent of brands are making significant investments in Voice. But user adoption for voice in retail is slow; only 16% of consumers say that they use voice technology for shopping. Brands need to think critically about how they can incorporate voice into e-commerce offerings in a way that isn’t gimmicky and adds value to the customer.

For example, it’s unlikely that someone would purchase an item of clothing through a smart speaker without ever seeing it – but if they could browse an apparel selection from the couch via a smart TV and use voice to make selections, that might be appealing. The brand could then allow that customer to get shipping updates or start a return process through the smart speaker. Voice services should be considered an additional touchpoint to consider throughout an entire customer journey.

Which brands are doing it best with the adoption of Voice for Marketing and E-commerce?

Walmart is preparing for a voice-first future through their work with Google Assistant, allowing customers to make purchases via Voice. There has been a lot of discussion about whether voice shopping is catching on, but Walmart was early to voice and recognized how behavior was different when interacting that way, with people slowly adding things to a shopping list over time. Then at some point, they complete the purchase transaction.

On other platforms, we’d be looking at metrics like cart abandonment rate and think there is a problem that needs addressing, whereas voice is driving a different behavior, and Walmart learned that early and is building out that experience. This is just one example but points to the value of getting involved early on.

How is Voice technology adoption evolving with the rise of Mobile, Social Media, and Video platforms?

Smartphones are the most popular devices for using voice technology – 85 percent of users we surveyed reported using voice on their smartphone – so the rise of mobile has been positive for voice adoption. We’re already seeing the convergence of these services, as Google recently made Assistant a core part of the Search app experience, Amazon has integrated Alexa into their primary and Music apps, and Apple is continuing to make it easier to use Siri through AirPods linked to an iPhone.

We’re also seeing early signs that many developing regions may skip the smartphone era altogether, and jump straight into a mobile ecosystem driven by Voice and Video. Brands shouldn’t be thinking of Voice as a distinct platform in a specific region, but rather a form of modality that will change how the world communicates, both with brands and one another.

Tell us about your key takeaways from Voice Summit 2019.

I had some interesting conversations at Voice Summit about whether Voice technology should imitate humans – and this was actually the theme of my talk at the event. Much of the discussion around best practices for implementing Voice interfaces assume they should be human-like assistants, with a distinct personality. That’s a foundational decision to make when crafting a digital experience, but many of us are just accepting that as the default starting point without considering alternatives.

Voice technology users themselves are split on whether voice technology should adopt more human-like qualities, our survey found. Personally, I think that many companies are forgetting about basic user experience principles when it comes to voice. Being able to speak a command and hearing a spoken response should be considered part of an overall digital design toolkit to create the right experiences. Making the experience “conversational” doesn’t always make sense.

How will emerging technologies like AR/VR gaming content drive interest in the medium of Voice for Gen Z customers?

Voice and Audio will be a crucial element of both AR/VR, as it’s a more convenient way to interact with a simulated environment (just as it is for a real-world environment). In fact, I think over time the term AR will expand to include voice/audio-only, non-visual experiences. If I’m walking down the street wearing AirPods, interacting through voice with a location-aware app that’s telling me the history of different buildings and places throughout a city, that feels like an Augmented Reality to me.

Mark Webster is Director of Product at Adobe, focusing on Voice integration for Adobe XD. He is also responsible for driving product strategy for emerging technologies within XD.

Mark joined Adobe through the acquisition of the company he founded, Sayspring, which offers a design and prototyping platform for Voice interfaces.

Adobe is the global leader in digital media and digital marketing solutions. Our creative, marketing and document solutions empower everyone – from emerging artists to global brands – to bring digital creations to life and deliver immersive, compelling experiences to the right person at the right moment for the best results. In short, Adobe is everywhere, and we’re changing the world through digital experiences.

45231
We store cookies on your computer to improve your experience and provide more personalized services, both on this website and on other sites. For more information about the cookies we use, see our Privacy Policy. We won't track your information when you visit our site. We will have to use at least one cookie to ensure that you won't have to make this choice again.AcceptPrivacy Policy